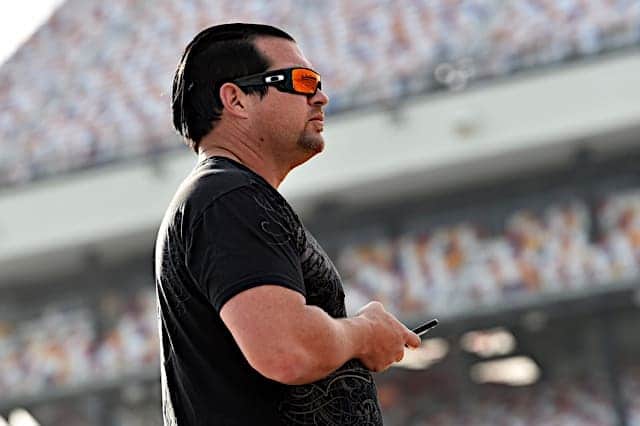 Of course, Jordan won’t be the first superstar athlete to make the plunge into NASCAR ownership, nor will he be the first multi-billionaire. However, at age 57, Jordan will be a significantly younger face than many of his counterparts competing in the NASCAR Cup Series

While much focus has been put on the basketball legend’s highly anticipated foray into NASCAR with partner Denny Hamlin and driver Bubba Wallace, it may be easily overlooked to see that Jordon is potentially giving a solution to a lesser-known problem within NASCAR.

For years, many in the NASCAR community have shown increasing concern with NASCAR’s aging ownership, as many competitive owners, such as Roger Penske, Richard Childress and Joe Gibbs, are well into their 70s and beyond.

In fact, of the top 20 cars in the current 2020 Cup owner points, each of their owners is beyond the age of 70, with the exception of 49-year-old Tony Stewart and 62-year-old Chip Ganassi.

Still, Jordan’s team has promised to be competitive from the get-go, meaning he will indeed become the most youthful face in the top half of the garage, assuming his promises hold true.

However, Jordan won’t be the youngest in the entire field. In fact, he is not even going to be close, which is especially promising compared to the lay of the land in 2017.

Andrew Murstein (56 years old) is one of the eight majority team owners (or ownership groups) who will be younger than Jordan entering the 2021 season. Murstein, the co-owner of Richard Petty Motorsports, has been leading the charge to transform RPM back into a competitive force, evidenced most recently with the hiring of Erik Jones.

Carl Long (53) has continued to expand his MBM Motorsports team after returning to Cup in 2017. 2020 has marked MBM’s first full-season effort.

The aforementioned Tony Stewart (49) has been one of the few owners under the age of 50 across the last decade. Still, Stewart and business partner Gene Haas have transformed their team into a four-car organization that has claimed two championships.

He may have only entered one Cup race so far in 2020, but Matt Kaulig (47) has enthusiastically transformed his NASCAR involvement from a small sponsorship deal to a multi-car powerhouse team in the Xfinity Series. Kaulig has indicated he would like to take his team Cup racing full time in the future.

A relatively new team, Jeff Dickerson (44) and TJ Puchyr have also jumped head-over-heals into NASCAR ownership over the past two years. The co-owners of Spire Motorsports are set to expand from one charter to three (one leased) in 2021.

Michael Jordan isn’t the only new owner for 2021, as former driver Justin Marks (39) will introduce his premiering Trackhouse Racing Team with driver Daniel Suarez. At 39, Marks will become the youngest full-time bossman, barring any younger additions.

Then there’s owner-driver BJ McLeod (36) taking his team Cup racing for the first time in 2020. Despite just being a part-time Cup effort, McLeod readily expanded his Xfinity team over the last several years and looks to further continue to enrich his NASCAR involvement, with rumors holding that McLeod could be jumping into the series full time in 2021.

While the modern ownership model is slowly shifting younger thanks in part to new owners like Jordan and Marks, it has been painfully gradual.

The NASCAR Gander Outdoors Truck Series is a polar opposite.

Interestingly enough, if Jordan were to make the dive into Truck ownership, he wouldn’t be in the top 10 of the youngest owners. He would become the eighth oldest owner, only behind Maury Gallagher, Al Niece, Duke Thorson, Bo LeMastus, Tim Self, Norm Benning and Jim Rosenblum.

It is worth noting that the average age of a Truck owner is well under 50. A great deal of this trend is owed to the resurgence of independents and owner-drivers such as 29-year-old Jordan Anderson and 30-year-old Josh Reaume.

Father-son ownership duos like Kevin and Dawson Cram and Ken and Korbin Forrister have moved the needle down too.

Still, the Truck Series is a development series, both for drivers and owners. While there is youth spread across the board, Marks and McLeod have been the only two who have made the scary jump to the top.

Will Jordan’s youthful enthusiasm for NASCAR perpetuate a cascade of followers? Only time will tell.

Did I miss something, or do you not know the meaning of polarizing?

if focusing just on cup fine…but you mentioned nascar owners.

dale jr and kelly earnhardt own jrmotorsports and i believe both are in mid to late 40’s now.