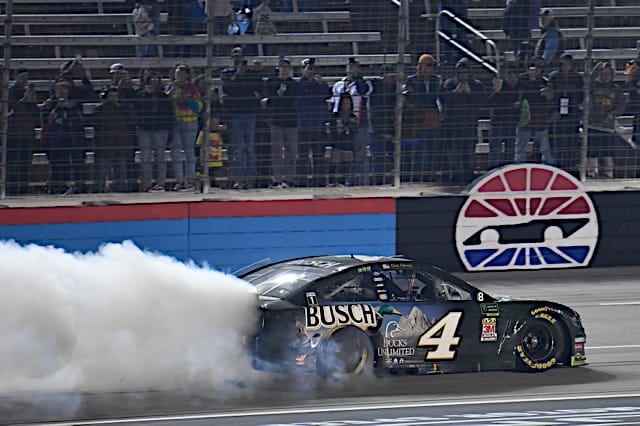 Yeehaw! It’s time for NASCAR Cup Series drivers to strap in their saddles and drive 550 horses (er, horsepower) at Texas Motor Speedway. Get your NASCAR DraftKings rosters ready for Sunday’s (Oct. 25) second race in the Round of 8.

Just three races remain in the 2020 season: Texas, Martinsville Speedway and the Championship  4 event at Phoenix Raceway. Playoff contenders will go all out to ensure their place in the final four, while others vie for a final shot at glory. Will anyone play spoiler and surprise everyone in Sunday’s event? Well, it is 2020 after all; we’ve already seen some shocking results.

In fact, the first Texas race this year saw a surprise winner thanks to a differing strategy call on pit road. Richard Childress Racing’s Austin Dillon and Tyler Reddick took two tires and fuel only, respectively, on their final stops, allowing them to get out in front. Dillon held off his teammate after several restarts and secured a spot in the playoffs with this victory.

So what can you learn from that when making your DraftKings lineups? Even with an upset, you’ll likely need one main dominator. In six of the past seven Texas events, one driver led over 100 laps (and all finished within the top 12). Second, target some low-to-mid-tier drivers who can get good finishes after starting back in the pack. Third, look at intermediate tracks, especially the 1.5-milers, as they can help indicate who is trending upward. These steps can help set you on the path to cashing your DraftKings contests.

Before I share this week’s picks, let’s review the results from Kansas Speedway.

Matt Kenseth ended up crashing out of the race about halfway and finished last, which really set this lineup back. It would have been better if I had played Kevin Harvick instead of Denny Hamlin, as he scored 95.75 fantasy points.

I obviously have to start with the driver who won this race three years in a row and is a strong favorite to win again. Harvick dominated this event the past two years, leading 119 laps in 2019 and 177 in 2018. Additionally, he recorded the most fastest laps in each race (67 in 2019; 83 in 2018). Though notching just 22 quickest laps in July, Harvick paced the field for 40 circuits and continued his lengthy top-10 streak.

The 2014 Cup champion’s Texas prowess mimics his 2020 performance as The Closer closed the deal nine times across multiple track types. Last week at Kansas, Harvick led 85 circuits and etched out 61 fastest laps. It was his strongest showing since last month’s race at Bristol Motor Speedway and was what he needed to garner some momentum for this week.

Harvick will pilot the No. 4 Ford from the pole position, which gives him another chance to dominate again. While the point leader is the most expensive driver on DraftKings, he should be worth it this week.

Texas hasn’t been the best track for Bowman, despite his strength on 1.5-mile facilities. However, last year he earned a track-best fifth-place result. He also nearly earned a top 10 earlier this season, remaining in contention through most of the July race. A good day turned sour around lap 319 when Hamlin got loose and slid up underneath Bowman, sending him sideways. Bowman ended up hitting the wall hard, causing too much damage to continue on in the race.

Still, the Hendrick Motorsports wheelman has showed some speed and finished well the last couple of months. At the past two intermediates (Kansas and Las Vegas Motor Speedway) Bowman recorded 20 fastest laps and finished third and fifth in each race, respectively. These results netted him over 50 fantasy points on DraftKings — great value for his salaries at the time.

If Bowman can keep this pattern going, it would produce another high score on DraftKings. Don’t hesitate to add him to the roster.

Jones has done well at this course so far, as he’s posted six consecutive top 10s, including a trio of fourth-place finishes. Perhaps even more noteworthy (for daily fantasy purposes) is he’s led 110 total laps so far at Texas. 64 laps came in the spring of 2018, tacking on 30 more the following year. Jones also recorded at least 10 quickest laps in half of his starts.

While the Michigander struggled last week (partly due to contact with Kenseth), he crossed the finish line eighth at Las Vegas and was fifth in the first Kansas event. Jones earned 42 and 59 DraftKings points in each corresponding race as a result. Additionally, he has four top fives and five top 10s in the past seven races.

Texas may be one of the best chances to play Jones on DraftKings, as he’ll head over to Richard Petty Motorsports next season. If the team stays underfunded, he might not have the equipment needed to get as many top 10s as before. Use him while you still can.

As mentioned earlier, Reddick was runner-up to Dillon in the first Texas event, matching his best result from the NASCAR Xfinity Series. He also led 105 total laps in his final three starts there in that division. Lastly, in July’s O’Reilly Auto Parts 500, Reddick held the top spot for five circuits and added four bonus DraftKings points for fastest laps.

The No. 8 Chevrolet driver has had varying results on 1.5-mile tracks this year. He finished eighth in the Coca-Cola 600 and gained 14 positions en route to a top 10 at Kentucky Speedway. Reddick also ended 10 spots further than where he began in the first Kansas event, which garnered 47 fantasy points on DraftKings.

However, Reddick’s recently encountered trouble at LVMS and in last week’s Kansas race. He crashed out on lap 157 and ended nearly dead last at Las Vegas. Then, in the Sunflower State, Reddick was running in the top 20 around lap 221 when he hit the wall and brought out the caution. The Cup rookie was mired too far back in the pack after that and crossed the line 25th.

Hopefully, Reddick will have better results this week and turn that 19th starting position into a top 10. RCR is hoping for a rebound.

I wavered between the two Roush Fenway Racing teammates, but ultimately settled on Newman. Though Rocket Man hasn’t won at Texas since 2003, he has four straight top 20s. Last spring, Newman ended up 11th, and earlier this year, he finished 13th. Also, the veteran nabbed a 10th in the fall 2016 event. Plus, he gained 10 positions in last year’s playoff race, position differential points which proved especially beneficial for DraftKings users.

The No. 6 Ford Mustang pilot has finished further than where he started in four of the past seven races in 2020. Notably, Newman ended 22nd at Kansas and 15th at LVMS, six and 12 spots higher than where he lined up. His performance in the South Point 400 resulted in 41 DraftKings points, which is fairly good value for his salary.

Now, Newman enters Texas $1,000 cheaper and could have another similar outcome on Sunday. If so, he’ll be sure to help you cash your DraftKings contests.

Here’s a fellow that I’ve overlooked lately. Nemechek, a Cup rookie, has been having similar performances like Newman — ending higher than where he started. Since August, Nemechek has earned 27 or more fantasy points on DraftKings. In fact, at Kansas, he scored 37 and 43 DraftKings points after finishing 19th and 17th there, respectively. He also gained five spots at Vegas, totaling 30.5 fantasy points.

Finally, in his first race with Front Row Motorsports last fall, Nemechek passed eight cars at Texas to end 21st. He followed that up this year by ending six positions further up from where he started. These extra bonus points can add up and help boost your score enough to cash in.