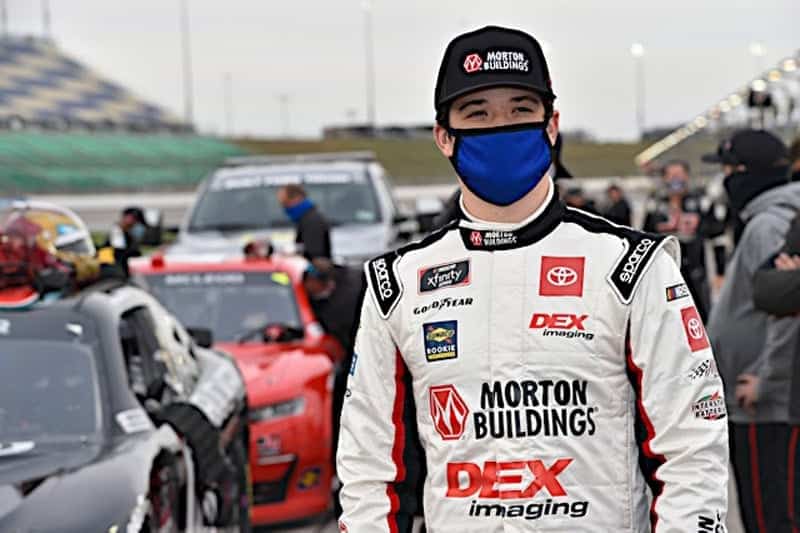 In a surprise ending to the O’Reilly Auto Parts 300 at Texas Motor Speedway, NASCAR Xfinity Series driver Harrison Burton snuck past Noah Gragson on the final turn to snag his third victory of the season.

Gragson, who took the lead with 15 laps to go, was in the midst of traffic when Burton closed in. After getting by Anthony Alfredo, Burton closed quickly upon Gragson’s No. 9 Chevrolet on the final lap. He snuck inside and blew by Gragson for the lead just before the checkered flag waved.

”We had such a fast racecar, I’ve never driven anything harder than that last corner in my life,” Burton told NBC Sports after the race. “I don’t know how it stuck. I lost my voice, I was screaming. It’s special….“

Burton’s fast No. 20 Toyota of Joe Gibbs Racing overcame a slide through the grass earlier in the race to take the trophy at the 1.5-mile track.

“This Toyota Supra was so fast,” Burton continued. “I’ve never spun out and then come back and won, so that’s kinda cool. We were obviously pushing the limits all day of speed, that’s just kind of what we came to do was to be fast. To win our first stage of the year, and then to do what we did on that last lap was incredible, I don’t know how it happened, but I’m pretty damn glad it did.”

It was a heartbreaking loss for Gragson. The runner-up finish left him below the cutline, fighting for a spot inside the Championship 4 next week at Martinsville Speedway instead of locking him in.

CHEEK: Gragson struggles to find the right words after sliding to second

Alfredo brought the No. 21 car of Richard Childress Racing home in third. Austin Cindric, who got loose while battling with Gragson for the lead on the final restart, was fourth. Brandon Brown rounded out the top-five finishers. It was Brown’s first ever top-5 result in NXS competition.

Ross Chastain ended up 16th after a late-race accident with Justin Allgaier and Brandon Jones. Allgaier ended 26th while Jones was just ahead of him in 25th.

Chase Briscoe, who locked himself into the championship finale last week at Kansas Speedway, had bad luck early on. A broken truck arm put his No. 98 Ford several laps down and out of contention for the race win. Due to attrition, though, he bounced back for a respectable 24th place.

There were several cautions for incidents during the race. Jeb Burton got loose and spun early on in stage one while battling with Alfredo. He was able to continue on, though. Later, around lap 40, David Starr’s engine let go, bringing out the yellow flag with a few laps left in that first stage.

Jones picked up the stage win after a one-lap shootout under green. Teammate Burton won stage two before the eventful final stage began. His spin, on lap 108, put him valuable track position and created a race-long charge back to the front.

Their third Joe Gibbs Racing teammate, Riley Herbst, increased the drama on lap 132. While running in eighth place, Herbst made slight contact with Jeb Burton’s left rear, a move which sent Herbst down the track. Herbst’s No. 18 Toyota hit the inside wall hard and he was done for the rest of the day.

Then, on lap 158, Jeb himself had his share of misfortune. A tire went down and sent the No. 8 JR Motorsports Chevrolet hard into the outside wall. Burton wound up retiring from the event.

From there, cautions continued to come out just a few laps after the field went back to green. Up next, Colby Howard, Myatt Snider and Joe Graf Jr. all spun around, with Snider getting the worse end of it. The wreck sent both Howard and Snider out of the race.

But the biggest mess was on the ensuing restart and involved several playoff contenders. Justin Allgaier, Chastain and Jones all wrecked with less than 25 laps remaining.

While Allgaier and Chastain battled for the lead, Allgaier got loose and slid up into the No. 10 car from Kaulig Racing. As they slid back, Chastain made contact with Allgaier’s No. 7 car and Jones’ No. 19. It was on from there, a multi-car incident that left Allgaier turned around and hard into the outside wall.

The damage proved too severe to continue on for Allgaier. However, he still remains eight points above the cutline heading into the penultimate race of the season. Austin Cindric, Allgaier and Haley would earn the other three spots in the Championship 4 if the season ended today.

The NASCAR Xfinity Series now heads to Martinsville Speedway next Saturday, Oct. 31 for the Martinsville 250. Coverage will begin at 3:30 p.m. ET on NBC and MRN radio.

It don’t get much better than that. Wish they had a camera on Mom.
This is how touchy TV has become. Jeff Burton was not allowed audio on his microphone to cheer for his son coming out the fourth turn heading for the checkered flag and the win. Years ago Ned Jarrett and DW were allowed to broadcast their live emotions for Dale and Mikey and we liked it.

Harrison Burton’s move on Gragson reminded me of the move Carl Edwards tried to pull on Jimmie Johnson in 2008 at Kansas coming to the checkered. Carl couldn’t keep it from drifting up and hitting the wall and Jimmie won, but Harrison made it stick. Great driving and great payback for when Gragson wrecked Burton earlier in the year at Kentucky.