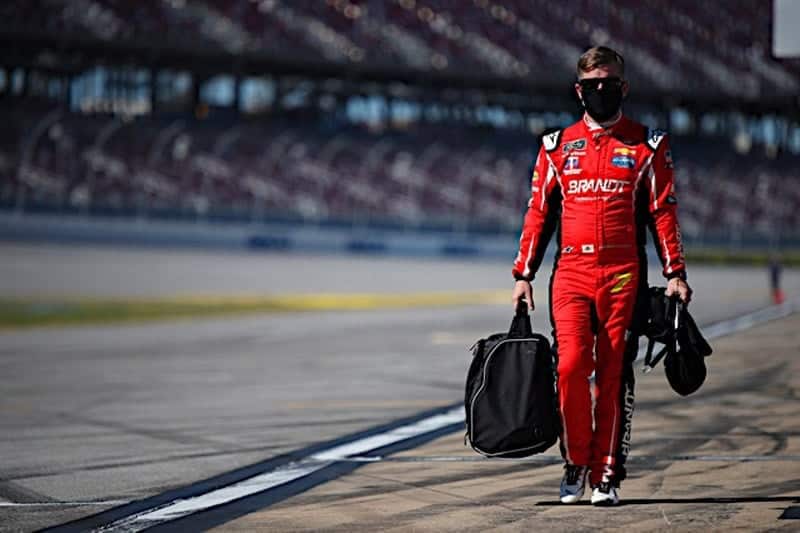 The middle race in the 2020 NASCAR Xfinity Series Round of 8 provided a cruel twist of fate to three playoff contenders. Justin Allgaier, Brandon Jones and Ross Chastain went from potential top-five finishes at Texas Motor Speedway to getting wiped out altogether.

On lap 176, Allgaier restarted on the inside of the front row. By the time lap 177 rolled around… he was nose-first into the outside wall.

Disaster on the restart strikes for multiple #NASCARPlayoffs drivers! ? pic.twitter.com/cNvqwPdjxB

The contact appeared to start off turn 2 as Allgaier shot up the racetrack. He then made contact with Chastain on the backstretch before the melee began in earnest.

By the time it was over, Jones, Chastain and Allgaier were the notable players among several drivers swept up in the mess. A frustrated Allgaier made it clear where he placed the blame.

“[Chastain] just decides to hang a left because he’s aggravated and wrecks the whole field,” he said. “So it’s a shame, for not only our team but everybody else. Ross is pretty two-faced and says a lot of things outside the race car and then drives like this on the racetrack a lot of times.”

Allgaier did better his odds of advancing to the final round with two second-place finishes in the first two stages, thereby earning 18 crucial stage points. That left him eight points above the cutline despite a DNF (26th) in the final rundown.

Jones wasn’t quite so lucky. His 25th-place DNF left him four points below the cutline with just one race to make up the deficit.

As for Chastain? He continued on but now sits 15 points back of the Championship 4. The Kaulig Racing driver accepted blame for the incident and was understandably dejected after the race.

“Definitely, it’s my fault,” he told NBCSN. “We had a race winner today… built all year to try to be the best we can right now and we brought a race-winning car… driver error. I don’t deserve to drive this race car, to be honest. To make those mistakes is absolutely unacceptable.”

“It’s absolutely crazy to stand here right now and think about the mistakes I made and took our No. 10 car out of victory lane. Finished 16th with a bunch of other torn-up race cars.”

The trio of drivers will now put their playoff lives on the line at Martinsville. Chastain may have the edge among them; he’s made 12 combined starts at the track between both Cup and the Gander RV & Outdoors Truck Series.

The 27-year-old Chastain has two top fives and four top 10s at Martinsville in his Truck Series races. He has finished inside the top 10 there in three straight events, including a runner-up finish in the Truck race last year.

Allgaier and Jones, meanwhile, have less than 10 combined starts between them at Martinsville. They also don’t have a single top-five result in any of NASCAR’s top three divisions racing at the track.

JOHNSTON: What the wreck means for Ross Chastain going forward

did anyone need further proof why algaier isn’t running cup.

or why gragson will never be in a mensa club?

These guys are their own worst enemy. I’m tired of hearing Ross saying it is his fault. Just because you admit it doesn’t make you the better person. Maybe Harvick was right about Ross. Talent they have, but race to win brains not so much.

These guys are their own worst enemy.
I’m tired of hearing Chastain blaming himself for these wrecks. Just because you admit it doesn’t make you the classy guy. Maybe Harvick was right.
They all got talent but race to win brains, not so much.