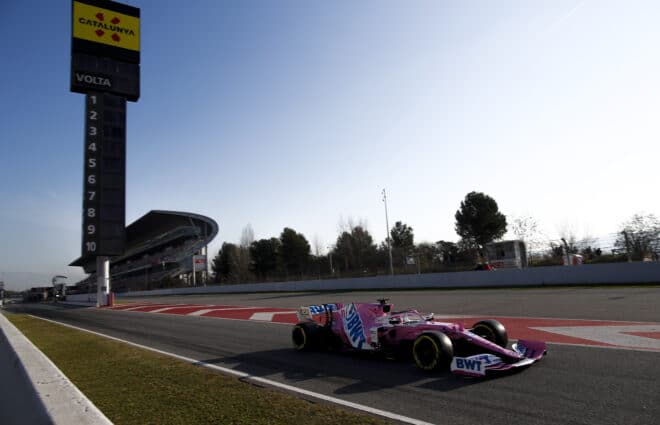 Inside A Remarkable Recovery For Sergio Perez

All season long in Formula 1, Sergio Perez, Lance Stroll and Racing Point have been steadily improving.

Building on the foundation laid down by the Force India team, in only two short seasons this group has progressed tenfold under the control of Lawrence Stroll. Their advancement was put on display with an incredible recovery during the 2020 Portuguese Grand Prix. Perez, spun out while running in third place, was able to climb all the way back to seventh in Sunday’s (Oct. 25) event.

Early on, it looked like the day would turn into a DNF. While battling for third with Red Bull’s Max Verstappen on the opening lap, the two drivers went for the same piece of real estate. In what was Verstappen’s second run-in with a Racing Point car during the weekend, Perez was sent into a spin. Fortunately for the the Mexican driver, his car sustained minimal damage.

Verstappen and Perez touch and the Mexican slides off into the barriers. He's got going again and has made it back to the pits 😮#PortugueseGP 🇵🇹 #F1 pic.twitter.com/whEfoGinkR

After finding himself in last place, around four seconds off the pace, the Racing Point team pitted Perez. The choice was made to stick him on mediums to try and go out for as long as he could to gain positions. As Perez climbed the grid, 46 laps later, he would find himself in P5. The gutsy call by the team worked well, giving Perez a fighting chance at a points finish.

With the race having only one retirement and long green-flag runs, the speed of Racing Point was able to shine through in addition to Perez’s own driving skill. After the final pit stop of the race, he was able to hold his own, scooting out ahead of both the Renaults and the McLarens.

In the final stint to the finish, both Pierre Gasly and Carlos Sainz Jr. got around Perez. Still, the Racing Point driver was able to hang onto seventh, a far cry from how the day could have gone.

Driver of the day, and rightly so 💪#PortugueseGP #F1 pic.twitter.com/yhbnZKjgiX

Racing Point opted to go with the long-run strategy for Sergio Perez in this case and the moves atop the pit box paid off. The speed of the car helped them gain positions over some of the F1 backmarkers and led to Perez’s rise through the field.

It has been a rough year for Racing Point off track. Both Perez and Stroll were lost to COVID-19 for a total of three races. They’ve been fined for their “Pink Mercedes” being too close to the 2019 Mercedes. Their ongoing protests from Renault have caused frustration.

But on-track, Racing Point’s success has been steadily rising. Sunday isn’t the first time the team has made some top-notch strategy calls. In Italy, the team played a safety car period perfectly to give Lance Stroll a podium and a shot at the win.

Next year, Racing Point will be rebranded to Aston Martin Racing and Perez was shockingly booted in favor of Sebastian Vettel. Perez currently has no ride for 2021. While being linked to a possible job with Williams, drives like these make him a prime candidate for a team like Red Bull who still needs to figure out who will man their second car.

Should Alexander Albon not be named as driver, the team said they will look elsewhere than in the Red Bull Academy. It could be a perfect opportunity for someone like Perez to slip in.

No matter what, Sergio Perez is certainly a very talented wheelman in the series. It’s a driver who should have no issue finding a ride somewhere in 2021 and the Portuguese recovery proves his worth.

As a team, Racing Point has grown and it’s very clear in their results. However, with the new partnership with Aston Martin and their added driver Vettel, it’ll be interesting to see how they can pull out more of these strategy calls and compete for wins in the future.

Alex has been writing in the motorsport world since he was 19. Starting his career with the NASCAR Pinty's Series, Alex's work has been featured in Inside Track Magazine, TSN & NBC Sports as well as countless race programs. Alex has also worked within the junior hockey world in Canada, appearing as a desk host for the OHL's Barrie Colts. He also got the opportunity to cover the 2018 Chevy Silverado 250 which appeared as the headlining article on NASCAR.com.
@@alexgallacher95
Previous Precipitation Delays Autotrader EchoPark Automotive 500 NASCAR Cup Series Race
Next Sports Betting in Racing: Things to Know

What Went Wrong for Lance Stroll