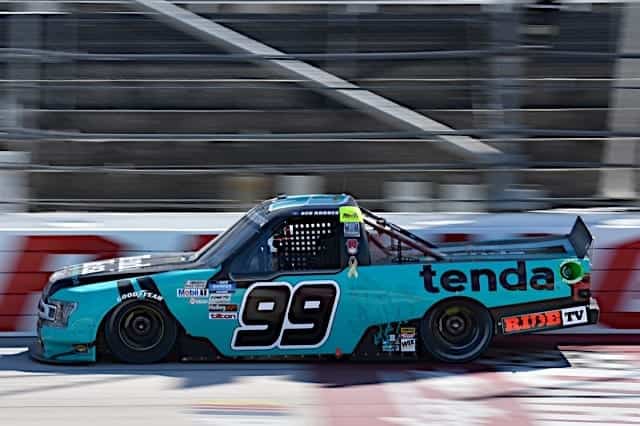 However, a pair of non-playoff drivers sparked on-track temper tantrums down the stretch. Stewart Friesen and Johnny Sauter were both battling for the lead with 18 laps to go when Sauter sent his No. 13 truck hard into turn 1. He bobbled on the inside line and slid up the track, collecting Friesen and sending both trucks into the outside wall. Friesen’s machine was totaled and retired from the race while Sauter managed to make repairs. However, the incident ended both drivers’ chances at their first win of 2020.

Wow … wow. Johnny Sauter and Stewart Friesen crash battling for the lead with just 18 laps to go at Texas.

The green flag had been back out for just a few laps when the field was slowed again, this time for Christian Eckes. Eckes was running third when Ben Rhodes turned right out of turn 4, hooking the No. 18 and sending him sliding into the outside wall at full speed. Eckes’ truck spun around so that it hit on the rear, but the rookie was still visibly shaken when he exited the No. 18.

Ben Rhodes hooks Christian Eckes and sends him into the wall.

Not to be deterred, Eckes detoured to the edge of the track to give Rhodes a piece of his mind (in this case, flashing both of his middle fingers at the No. 99) before he went to the ambulance.

Rhodes was involved in another incident at the end of the race. The No. 99 and Josh Bilicki made contact on the final lap, a wreck he felt was started by Chandler Smith in retaliation. Both KBM trucks were the focus of his frustration over how the race played out.

The incident sent Bilicki and Rhodes hard into the outside wall as the leaders were less than half a lap from taking the checkered flag. NASCAR made the decision to throw the caution feet from the finish line, ending the race.

“It’s two times the guy runs me out of the groove,” Rhodes said of Eckes after the race. “I almost knocked down the turn 4 wall, completely on the gas, hand over fist, and I’m trying to catch it. I end up hitting him, he gets wrecked, we go to the back of the field…[looking at the replay] I’m trying to gather it up, he almost put me in the wall for the second time.

“So I’m trying to gather it up, we get into him, which is unfortunate…then the 51 [Smith] right here jacks me up in retaliation for his teammate and wrecks me and Bilicki. I apologized to Bilicki’s team, that wasn’t any of my doing. We’re running in the back with a damaged truck already, and these guys in the [Kyle Busch Motorsports] trucks just run over everybody and race with no respect.”

On the replay, Rhodes’ truck is seen as swerving into Eckes’ right rear. But the title contender made clear he doesn’t care what people think.

“They can have their own opinion [of the incident with Eckes],” he continued. “I was in the truck, I know what happened. I tried to pass the 2 on the outside for the lead, he does the same thing – I almost hit the wall. Then the 18 does it for the second time in the race and you’re trying to gather your truck up, it’s very different when you’re outside watching and when you’re inside actually doing it.

“It’s just a shame, because I know how hard our guys have worked for the playoffs…and they don’t deserve any of this. We had a great truck, we had a truck that could’ve won today, my teammate did as well, and now everybody wants to fight us for incidents that I’m put into, and it all comes from the KBM guys. The kids driving it – the 51’s wrecked off me three [or] four times this year now, then wrecks me going into turn 2, so I don’t know. It seems to be a lack of talent over there. I think that’s evident when Kyle [Busch] hops in the truck and he goes and wins.”

Rhodes and Eckes exchanged words and shoves some time after the checkered flag waved.

Long conversation ended with a pushing/shoving. NASCAR security there to intervene. pic.twitter.com/f6S2sKaoj1

Bilicki was none too happy with Rhodes, either, and took to Twitter after the race.

Bilicki’s team owner, Josh Reaume, had some words of his own over the radio.

“ThorSport better have a new truck for me at my shop,” Reaume said. “…Or, mark my words, whatever contender they have, ain’t gonna be a good race for them.”

@jeff_gluck @RacingUnderdogs @DustinAlbino Ben Rhodes dumped Bilicki in the 00 on the last lap and here’s what team owner Josh Reaume had to say about it: pic.twitter.com/jDEtKQaWtK

Additionally, earlier contact from Rhodes sent Todd Gilliland spinning up into the wall. It was a violent hit that knocked the No. 38 out of the race.

Smith had his own issues earlier in the race with Tanner Gray. Both trucks were forced to pit road after on-track contact, but Smith immediately lost one of his tires as soon as he went back out onto the track.

“He should go back to NHRA where you can actually drive straight,” Smith said over the radio. “Can’t [bleep]ing do it down a straightaway to save your [bleep]ing life, you idiot.”

Smith and Rhodes had words of their own after the race on pit road.

Up front, Sheldon Creed avoided all the chaos and scored his fourth victory of the season, locking himself into the Championship 4 at Phoenix Raceway.