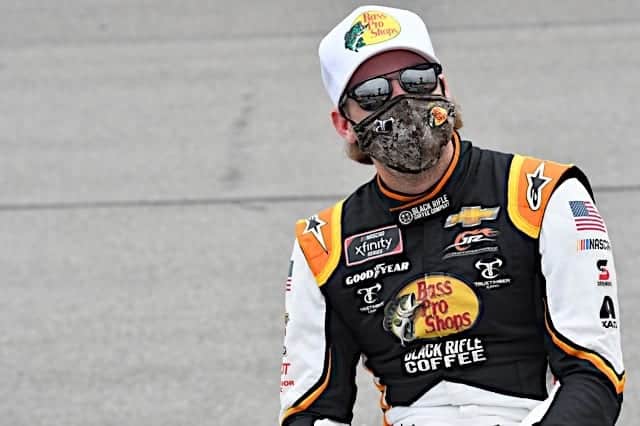 Everything is indeed bigger in Texas for the 2020 NASCAR Xfinity Series… including the drama. Suddenly, the NXS championship race is all scrambled up.

With many title contenders falling victim to over-aggressive moves, bent fenders and hurt feelings, it was playoff driver Noah Gragson who looked as if he would fight through it all and get his third win of the season in Saturday’s (Oct. 24) O’Reilly Auto Parts 300 at Texas Motor Speedway.

But that all went out the window in the final turn of the final lap. Harrison Burton, who had an eventful day of his own, chased down Gragson with the speed of a cheetah. Burton ate up a one-second deficit in less than three miles, then made one last power move on the inside of Gragson through turns 3 and 4. This time, it stuck for him, and Burton sailed away from Gragson to win by four tenths of a second. It’s Burton’s third career Xfinity Series victory and his third of the 2020 season.

Burton won stage two and led 24 laps in Saturday’s race. But on lap 108, he got loose and spun coming off turn 4. Nonetheless, the young driver regained focus and used the remaining 92 laps to recover, putting himself in position to win. Gragson’s slip-up in the final corner was the mistake Burton needed to put on a cowboy hat in Texas Motor Speedway’s victory lane.

Anthony Alfredo was third, Austin Cindric wound up fourth and Brandon Brown rounded out the top-five finishers. It is Brown’s first ever top-5 result in NASCAR Xfinity Series competition.

Even though Burton’s Texas win no longer counts in these playoffs, it’s the shot in the arm he needed after failing to advance. The Joe Gibbs Racing No. 20 Toyota had plenty of speed and Burton had plenty of ability to take his car wherever he needed to take it. Win No. 3 on the season, combined with freshman teammate Riley Herbst crashing out of the race, may have been the perfect recipe for Burton to claim 2020 Rookie of the Year honors.

Burton’s triumph, of course, comes with great disappointment for Gragson. Coming into Texas below the playoff cutline, the JR Motorsports driver knew he would have to dig deep and create opportunities to advance to the Championship 4. For 199-and-a-half laps, he did just that. 43 laps led by Gragson were the most out of anyone; a late-race accident involving other top contenders seemed to part the waters up front.

But as the laps wound down, Burton’s determination proved to be just a bit stronger. The defeat was so gut-wrenching Gragson was near speechless in his post-race interview.

An opportunity lost at Texas doesn’t mean Gragson won’t get to shine at Martinsville Speedway, though. He’s won there before in the NASCAR Gander & RV Outdoors Truck Series. A repeat performance in NXS could make Saturday’s heartbreaker a distant memory.

After finishing strong at Kansas, Lady Luck took a more unfortunate turn for Ryan Sieg at Texas. His No. 39 experienced mechanical woes 55 laps into the race, forcing him into the garage for repairs. Sieg returned to the race, but after completing 136 laps, went behind the wall again due to a malfunctioning driveshaft, finishing a disappointing 31st. The problems leave Sieg in a must-win situation heading to Martinsville.

Considering the magnitude of this event for playoff drivers, combined with some aggression on restarts, it was all a matter of how long fans could hold their breath before carnage struck at TMS. And, much like at Kansas Speedway a week ago, several playoff drivers would get a foul taste of the action.

Pole sitter and playoff leader Chase Briscoe was the first victim. On lap 36, Briscoe encountered a flat right rear tire and came to pit road from the race lead. However, the damage proved far worse than some faulty Goodyears. Seven laps later, Briscoe would head into the garage to fix what would be a faulty rear shock. He came back onto the track, 16 laps down, and would end his day a disappointing 24th. Fortunately for Briscoe, the poor performance does not affect his Championship 4 status thanks to that win at Kansas.

But the big playoff shakeup of the race came on a lap 175 restart. Justin Allgaier led coming to the green, but he got loose, slipping up the racetrack. Coming out of turn 2, he and Ross Chastain then made contact. The two spun around, ultimately capturing both Brandon Jones and Jeremy Clements in their mess. Allgaier, Jones and Clements could not continue on while Chastain nursed his bruised No. 10 Chevrolet to a 16th-place finish.

For Jones, Allgaier and Chastain, this incident puts them all on edge heading into Martinsville. Allgaier is eight points ahead of the cutline while Jones and Chastain are on the outside looking in. More importantly, his “two-faced” comment toward Chastain was a rare moment of anger for Allgaier, one of the more mellow drivers on the NXS circuit.

Could a second clash happen between them?

Anthony Alfredo literally went from bottom’s up a week ago to a podium finish. In his last scheduled NASCAR Xfinity Series start of 2020, Alfredo took his No. 21 Chevrolet up from the 18th starting spot to a solid third-place result, a career best. His battle with Burton over the closing laps almost kept him from getting to Gragson before the checkered flag flew.

This third-place result by Alfredo beats his previous best result of fourth, which came at Homestead-Miami Speedway in June. It’s his second top-5 and ninth top-10 finish in the 19 starts he has made this season. Alfredo was near tears in a post-race interview with NBCSN while lobbying hard to find a way to stay in the series full-time come 2021.

The amount of attrition that fell on many of the top runners also allowed more drivers to earn career-best performances. Brandon Brown (fifth), Ryan Vargas (eighth) and Tommy Joe Martins (10th) stood out for their quality runs. Texas driver Bayley Currey (12th) and CJ McLaughlin (20th) should also be singled out for making the best of their underfunded rides.

“I’ve never spun out and come back and won, so that’s kind of cool. To win our first stage of the year is a good sign of our speed. And to do what we did on the last lap was incredible. I don’t know how it happened, but I’m pretty damn glad it did.” – Harrison Burton

“Just frustrated with myself. I was pretty tight there at the end. I saw Alfredo holding Harrison off and I thought we were getting away. Then I saw the No. 20 get by the No. 21 and he ran me down in, like, two laps. I knew he was coming, I just didn’t expect him to get there.” – Noah Gragson

“The Maestro Chevrolet Camaro was definitely good enough today. To be that close is definitely disappointing, even though it’s the best finish for us this year. What I’ve gotten to do this year is really cool. I just hope I get to do this full-time next year and run for a championship.” – Anthony Alfredo

With a wild last two races, who knows what you can even predict in the Round of 8 finale at Martinsville Speedway? The evil trend of playoff drivers finding trouble in this round is always a haunting possibility.

At a little track like Martinsville, we can expect to see drivers race hard and make questionable moves in order to race for a championship at Phoenix Raceway, causing some tempers to boil and overflow. We’ve seen it happen plenty of times there before in the Truck Series and in the Cup Series. Why would NXS be any different?

Of course, the wild card is it’s been over a decade since the Xfinity Series has turned a lap at the 0.526-mile facility. Who will get spooked? Who will get tricked? And who will take home the treats as this series races on Halloween?

The Round of 8 in the NXS playoffs will come to an end at Martinsville Speedway in Virginia, a track that the series hasn’t raced on since 2006. The Draft Top 250 is scheduled to begin at 3:30 p.m. ET on Saturday, Oct. 31. NBCSN will televise the event with radio coverage on SIRIUS XM Channel 90 or your local MRN affiliate.

While I’m a fan of Chastain, I have to agree with Allgaier… Chastain reacted out of anger and triggered their wreck. To me, it was immediately obvious; I didn’t even need to see the replay to confirm it.

Noah Gragson is a very talented driver, but as Ricky Stenhouse’s career has shown, raw talent alone won’t get the job done on race day.