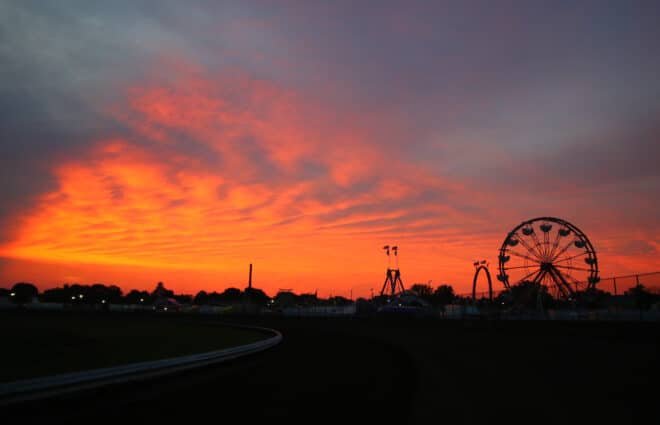 Beside the Rising Tide: The Home Stretch

I’ve been alive 61 years now and writing about stock car racing for the last 25 of them. I don’t know why I still get surprised late every autumn when the same changes occur. The days get shorter and the nights get colder. The passing of days and weeks and now hours turns the trees here in rural Chester County into an impressionist painting in a kaleidoscope of colors mere words cannot adequately describe.

They say here this week is “peak” leaf-peeping time. I am old and cynical, but not so old and cynical that Mother Nature doesn’t take my breath away this time of year. Yet today, I decided to take in the spectacle not aboard my beloved Harley but in the comfortable leather-lined confines of the Hemi Jeep with the heated seats set to “Stun.” The morning fog that blanketed the area before I set out made the decision easier. Low-visibility conditions and other drivers chatting on their phones and distracted by the vibrant fall foliage don’t blend well with motorcycles. Odd that that never used to bother me.

My older friends have told me for years that the aging process tends to make the days longer but the years shorter. For all its challenges, getting older still beats the alternative.

I’d wager that a vast majority of people have found 2020 a very long year and one they will not view fondly even down the road through the sentimental lenses of memory. Normally this time of year, I’d start cleaning up my desk from the piles of various and sundry piles of paper, printouts, doodlings, photos, half-eaten Whoppers and post-it notes. This year I’ll probably need to use a leaf-blower to accomplish the task.

Yes, 2020 has been a very long year. It seems like an eon ago the Daytona 500 was postponed until Monday by rain, and Ryan Newman’s terrifying wreck had most of us convinced that we’d just seen him badly injured if not killed.

And 2020 was just getting warmed up. The transporter trucks were actually pulling into Atlanta in mid-March when NASCAR announced the race had been postponed. In that instance, the postponement wasn’t due to bad weather (and recall that the weather was horrendous at many racetracks early this season) but a bad virus that was about to send our world all catawampus. Real stock car racing (as opposed to a glorified video game most of us watched anyway) would not return until mid-May at Darlington.

Yet somehow, NASCAR has managed to conduct 29 more races after the shutdown and is on track to run an entire 36-race season as scheduled before the pandemic. I wouldn’t have bet a dead cat and a string to swing it on they’d have been able to do so, even while other sporting leagues sat idle most of the summer. It took some changes — most notably some mid-week races and a pair of doubleheader weekends — but they did in fact get it done. I have to give credit where credit is due in this instance.

Largely because most of those races were run before empty grandstands or in front of severely restricted numbers of fans, I’d guess there were no super-spreader outbreaks resulting from a stock car race. Oh, we had a couple scares. Seven-time Cup champion Jimmie Johnson missed the Brickyard 400 after he and Mrs. Johnson tested positive for COVID-19. Austin Dillon suffered the same fate, but thankfully neither the Johnsons nor the elder Dillon brother got very sick.

Some of the experiments worked out alright and others did not. The TV ratings for mid-week races were so low that that portion of the experiment is over. That’s too bad. Admittedly, I’ve long argued for at least some mid-week races during the summer in my ever-quixotic battle to have NASCAR somehow pare down the bloated length of their season. The jury is still out on cancelling practice and qualifying on Cup weekends. It appears likely that there will be qualifying and practice only for a very select number of races next year. If nothing else, holding at least one practice session would base the starting lineup on merit, not some complicated mathematical formula that is far too close to high algebra for my tastes.

(Not to mention eliminating some embarrassing gaffes like unsecured ballast weight falling onto the track early in the event, or a championship-contending driver starting the race with a non-functioning radio.)

The jury is in on stage racing and the verdict is guilty. The vast majority of fans simply don’t care for it, TV networks be damned. The low (550) horsepower package with the “high down-forced” rear spoiler that looks like it was pirated from a fence has also drawn negative reviews. Perhaps as things slowly return, or at least trend toward normal, NASCAR will make some changes taking advantage of the upcoming offseason. But like I said, I am impressed they’ve managed to run all these races this season. So I’ll cut them some slack, though it’s not something I do habitually. Just so long as everything is absolutely perfect in 2021, of course. I’m being facetious here, mainly out of curiosity to see if I can still spell the word.

There have been some surprises over the last year, beyond going to get your hair cut or stopping by the corner tavern for a beef sandwich and a brew rivaling a game of Russian roulette with five in the chamber as far as danger. I don’t think even his most passionate detractors would have expected Kyle Busch not to score a single win this year. Busch feels like the lack of practice deprives him and his team a chance to perfect their car and get it handling to his liking. As noted above, that state of affairs will continue for much of next year, so we will see, shan’t we?

It’s perhaps easier to accept that retiring seven-time champion Johnson hasn’t taken a checkered flag yet this year, somewhat tarnishing his retirement celebration. After all, Johnson hasn’t won a points paying race since June of 2017. All the hoopla intended to celebrate the final year of his incredible career fell victim to expediency for the most part during these shortened race weekends. His disqualification at Charlotte, a track he virtually owned for years, and his missing the playoffs by six points subsequently just added insult to injury.

And somehow it has come to pass that with Texas soon to be in the rearview mirror, there are just two races left to decide who will be this year’s Cup champion. You could pose a valid argument that the race at Phoenix will be the actual determiner of who wins the title.

(It’s a hell of a way to determine a title after a nine-month season.)

But of the two remaining races, I look forward to the Martinsville event far more than Phoenix. I don’t suppose it will surprise any of you that the seven races on the schedule I look forward to the most are the three remaining true short tracks (Bristol, Richmond and Martinsville) and the Southern 500. Racing returning to Martinsville reminds me of that Ron Howard film Cocoon. A sport that sometimes seems to have its best days in the rearview mirror decades ago suddenly visits a track that’s been on the schedule since the inaugural NASCAR season of 1949, regains its vitality, and grabs my attention like a pair of vice grips. I’ve said before and will likely repeat myself again ad nauseam: There’s nothing so wrong with the new NASCAR that it can’t be fixed with an old racetrack.

(For the record, when Wilford Brimley starred in Cocoon as a crotchety but feisty senior citizen he was 49, some 12 years younger than I am today.)

Well, my coffee’s cold and I’m getting it told, so I gotta get back to work. Yes, as impossible as it seems there’s just two races left on this year’s schedule. Yes, time flies. Based on the manifests on this year’s airlines, it’s about the only thing left that does.

Author’s Note: I don’t often stray into the realm of politics, but I make an exception every four years. It confounds me that this will be the sixth presidential election I’ve made similar comments on. Mom had hoped I’d grow up and get a real job somewhere along the way. I have too high an estimate of my average reader’s intelligence to try to sway you to vote for one candidate or another. I just want to urge you to get out there and vote. Too many brave men and women died on the field of combat to guarantee you the ability to play your part in the future of the greatest country on earth. They often died on foreign soil alone, far from their homes and the people who loved them to grant you that right and privilege. In addition to being a right and privilege, I consider it your sacred duty. In summation, at least make this promise: If the lines are too long at the polling place and you decide to go home, nuke up a pizza, crack a brew and then watch a rerun of The Big Bang Theory rather than vote, you’ll surrender your right to complain for the next four years.

Matt joined Frontstretch in 2007 after a decade of race-writing, paired with the first generation of racing internet sites like RaceComm and Racing One. Now semi-retired, he submits occasional special features while his retrospectives on drivers like Alan Kulwicki, Davey Allison, and other fallen NASCAR legends pop up every summer on Frontstretch. A motorcycle nut, look for the closest open road near you and you can catch him on the Harley during those bright, summer days in his beloved Pennsylvania.
Previous NASCAR Cup Race at Texas Postponed Once Again
Next Beyond the Cockpit: Anthony Alfredo Hopes to Return to Richard Childress Racing in 2021