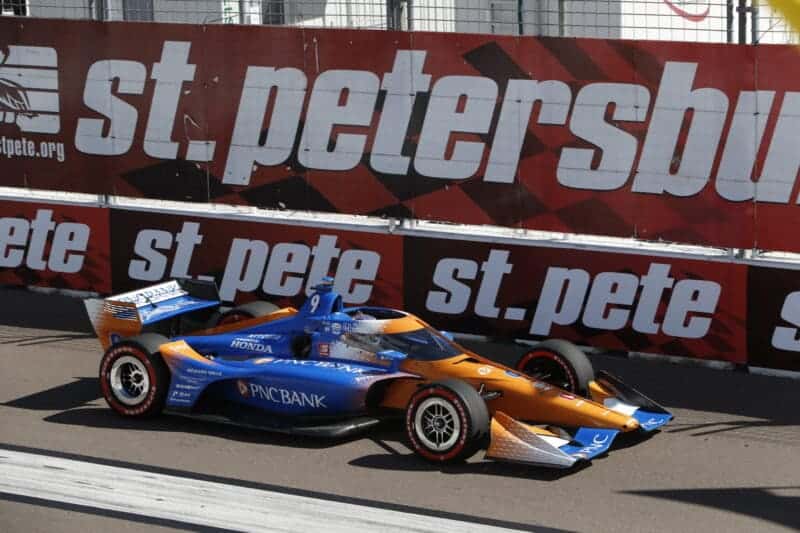 The 2020 IndyCar season came to an end at the Firestone Grand Prix of St. Petersburg and no one can say that the season finale wasn’t entertaining. What started as a seemingly straightforward race on Sunday (Oct. 25) turned into a series of unbelievable plot twists, all leading to Scott Dixon‘s sixth NTT IndyCar Series title.

For the final time this year, we look deeper into the weekend’s IndyCar action with our 2020 Firestone Grand Prix of St. Petersburg takeaways.

1) Attrition is a very real thing

Much of the conversation around the Grand Prix of St. Petersburg will be about the title contenders and deservedly so. What Dixon has done is historic and Josef Newgarden powered his way to a race victory. But Newgarden’s path was made much more interesting by the fact that everyone in front of him was getting taken out.

His Team Penske colleague Will Power seemed set up for a runaway victory from the pole, until he had a downshift issue and ultimately was the first car out of the race. Then Alexander Rossi took command but his day went the same way as most of his season (more on that in a minute). Colton Herta spun on his own; ditto James Hinchcliffe.

Fans even watched as the pace car somehow, unbelievably, ran out of fuel.

Not to take anything away from Newgarden, who hustled all day to get that win and put hmself into position to steal the championship. But there were a lot of people in front of him with decent shots at that checkered flag before fate decided to have a little fun with the IndyCar field.

Is there anyone happier to see the end of the 2020 IndyCar season than Alexander Rossi?

The Andretti Autosport driver has struggled through most of the year, usually through no fault of his own, and his season ended the way it began—with Rossi getting a kick in the gut. The No. 27 AutoNation Honda was poised to write an uplifting story and take off with a clear victory after getting around Power, with Rossi building up a fair lead. But then he went into the marbles, and his car went into the wall.

Whether or not you’re a fan, you have to feel for him. Rossi has battled constantly in 2020 and things seemed to be looking up for him in the last few races of the season with his podium finishes. It would have been fantastic, as well as a huge relief, to see him finally get a victory in the season finale. But apparently the racing gods weren’t done with him yet. Here’s hoping that 2021 treats Rossi better.

3) Sebastien Bourdais is back

Someone who had a pretty fantastic outing on Sunday was Sebastien Bourdais. After his return to IndyCar in the 2020 Harvest Grand Prix wasn’t great, Bourdais qualified well for the 2020 Firestone Grand Prix of St. Petersburg and ultimately brought the No. 14 AJ Foyt Racing entry home in fourth place.

The four-time champion’s result was even more important because the No. 14 car was battling for valuable Leaders Circle money with several other cars; Bourdais’ finish guaranteed an extra million dollars for his team’s budget next year.

Even though he was only out of IndyCar for a limited time, it’s good to see that the French veteran is not only back but competitive, and what he just did will provide a huge boost to his car in 2021. Maybe he’ll be the spark plug that the Foyt team needs to push its cars toward the front.