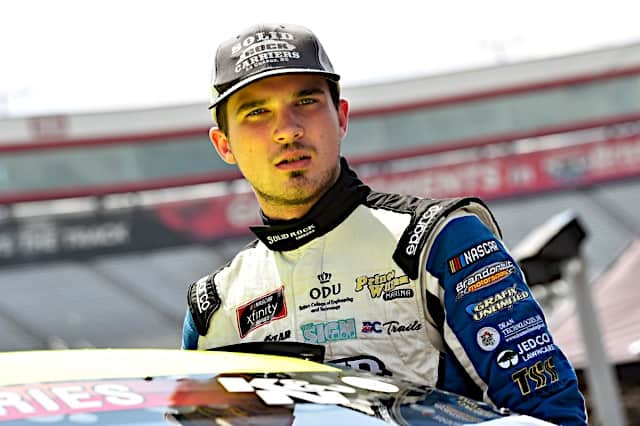 Fresh off his runner-up result at Kern County Raceway Park in the ARCA Menards Series West, Mason Diaz will pilot the No. 26 Toyota for Sam Hunt Racing in the NASCAR Xfinity Series for the final two races of the season at Martinsville Speedway and Phoenix Raceway, the team announced Oct. 26.

“This is a great opportunity to run for a fantastic new team,” Diaz said in a release. “I’m really looking forward to the challenges I face without having any practice or qualifying. These are longer races than what I typically run but I think it will be an absolute blast to work with everyone at Sam Hunt Racing. I’m extremely thankful to everyone who has made this opportunity possible and hopefully we can come away with two good finishes to end the year.”

Diaz has one prior start at Martinsville, where he finished 23rd (after qualifying ninth) in 2017 for Brandonbilt Motorsports.

For Martinsville and Phoenix, the No. 26 will be sponsored by Prince William Marina, FloCoating Powdercoat, Solid Rock Carriers, TSS Services, The Sign Shop, Graphix Unlimited, Barrett Capital and Accent Imaging.

Diaz finished third at Dover International Speedway, ninth at Toledo Speedway and fourth at Bristol Motor Speedway to finish off a fifth-place finish in the ARCA Menards Series East standings in 2020, not to mention his career-best result Sunday at Kern County Raceway in the West division.

We came home one spot to short today @KernRaceway. My @VenturiniMotor team brought me a very fast @ToyotaRacing Solid Rock Carriers Toyota Camry! It was a great way to end this season in Arca with my best career finish! #trd #teamtoyota #flythev pic.twitter.com/mVBeSRg7oX

“Mason is a true racer. He’s a gritty kid that is close to his roots and understands what goes into racing at this level,” team owner Sam Hunt said in the release. “The challenge of hopping into an Xfinity car without practice at a place as tough as Martinsville or Phoenix is no easy task, especially coming from the rear; but I know he is up for the challenge and most importantly, he’s genuinely grateful for the opportunity. We’ll use Martinsville as a chance for Mason to acclimate to the team and car, and hopefully carry momentum to Phoenix and finish the season on a high note.”

Diaz also has experience at the Paperclip in late models and regularly races at Dominion Raceway in Virginia, making the partnership between a Virginia-born team owner and Virginia driver a no-brainer.

Sam Hunt Racing’s best finish this season has been a 12th-place effort at the Indianapolis Motor Speedway road course with Brandon Gdovic behind the wheel. Colin Garrett also placed 14th at Homestead-Miami Speedway, the best result of his five races in the No. 26.

Eddie Troconis will finish the season calling the shots as crew chief for SHR after leaving AM Racing in the Gander RV & Outdoors Truck Series, while former crew chief Bryan Smith will transition to the shop manager role.