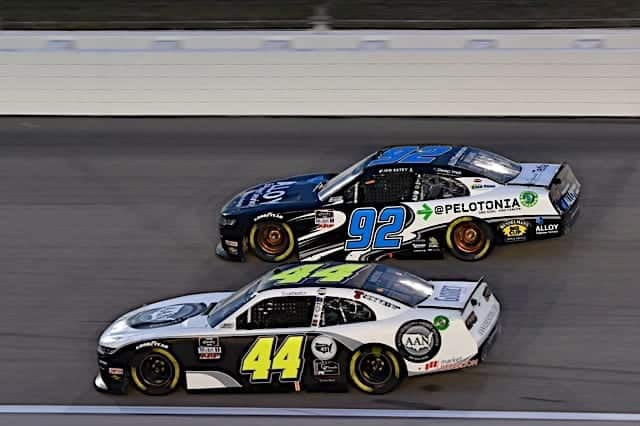 With the conclusion of the NASCAR Cup Series race at Texas Motor Speedway getting postponed until Monday morning (Oct. 26), this week we’re focusing solely on the other two NASCAR national touring divisions.

And man, is there a lot to unpack.

The NASCAR Xfinity Series put on another action-packed event with major playoff implications. Brandon Jones won stage one but found himself in the middle of a Chevrolet sandwich on lap 177 when Ross Chastain turned right on the field (and took ownership). His mistake triggered a four-car pileup that included Justin Allgaier, another playoff driver.

Personally, I’m not a fan of wrecking. But over the past three years, Texas has become the obvious wild card race in the Xfinity playoffs. Who would have thought half the title contenders would finish outside the top 20?

If that action wasn’t enough to satisfy your needs, it looked as though Noah Gragson was going to cruise to victory, sneaking into the Championship 4. That was until Harrison Burton got to second position with two laps to go, chasing down the No. 9 car and passing him on the final turn. Following the race, Gragson said the car got tight over the final few laps, but losing the handle was costly. He was in a must-win situation and might have seen a championship slip from his fingers.

And what about that Gander RV & Outdoors Truck Series race!? In one sense, it was a complete sh*t show as some drivers clearly have a lack of respect for others on the racetrack. What comes around, goes around though, so don’t be surprised if the Round of 8 cutoff race is complete chaos next weekend. There were too many feuds from late-race wrecks to count, and those tempers are bound to carry over into a short track like Martinsville Speedway.

With all of the carnage spanning across both races, the underdogs put up big numbers this weekend at Texas.

Dating back to last Friday (Oct. 16), Josh Williams has had to overcome a lot of personal adversity. His friend and fellow crew member at Josh Williams Motorsports, Tim Hayes, died at his home.

I will forever miss my brother and friend Tim Hayes pic.twitter.com/DC6CbDSAPL

The next night at Kansas Speedway, Williams drove his heart out for a career-best sixth-place finish. For small, underfunded DGM Racing, made up of less than a handful of full-time employees, that’s a big deal.

To say the least, those 24 hours were an emotional roller coaster.

Williams showed up at Texas this weekend with a 13th-place starting position, his best on an intermediate track. The No. 92 Chevrolet hovered around the top 15 all night long, and with those late wrecks, Williams climbed his way to ninth.

By taking the checkered flag in sixth and ninth over the last two weeks, it’s the first time Williams has earned consecutive top-10 finishes in his 92-race Xfinity career. Dating back to the 300-mile event at Talladega Superspeedway, DGM Racing has top 10s in four consecutive races, the best stretch in team history.

For the first time in his career, @Josh6williams has multiple top-10 finishes in a row (finished ninth).

Half of his total top 10s in the Xfinity Series (three) have come over the last four races.

With the way the 2020 NASCAR season has played out — shut down for 10 weeks due to the COVID-19 pandemic, no practice or qualifying — it would surely be a difficult season to revamp a race team. But last December, when Tommy Joe Martins announced he was bringing Martins Motorsports back to the Xfinity Series, he was ready for the grind.

Maybe not this type of grind, though.

The season started off bleak for the No. 44 team, a story I covered as the team has had countless trials and tribulations. But over the past three months, Martins’ team has grown accustomed to the series, scoring eight top-15 finishes over the last 16 races. That includes his 10th-place result over the weekend at Texas.

From start to finish, Texas was probably Martins’ best race of the season, hardly ever racing outside the top 15. In fact, for the better part of the event, he was scored somewhere between 10th and 12th, which is leaps and bounds ahead of where the team was early in the year. It was hands down the best he’s ever run on an intermediate track, regardless of finish.

The ole adage is slow and steady wins the race, right? In this case, building to a top 10 means so much more. Martins scored a team victory on Saturday, even if it doesn’t show up in the win column.

On lap 2 of Sunday’s SpeedyCash.com 400, Matt Crafton wasn’t preparing for a stage win at Texas. He was expecting a DNF, looking toward the Round of 8 cutoff race at Martinsville Speedway and hoping for the best.

Why, you ask? On the second lap of the race, the No. 88 team believed it needed to replace the entire ECU unit, and Crafton was cursing on the radio, reporting he couldn’t power down the straightaways like his closest competition. By the opening handful of laps, he’d fallen outside of the top 10.

But the reigning champion didn’t give up. Throughout the remainder of the opening stage, the No. 88 truck jumped to fifth on the scoring pylon, earning six stage points.

The truck only got better. On a restart with 12 laps remaining in the second stage, Crafton was able to get by Sheldon Creed for the race lead, marching on to win his first stage of the season. Yes, you read that right.

So I’m telling you, a team that intended on going under the hood to check its engine — one who had choice words for Ilmor yet again (ThorSport Racing driver Grant Enfinger blew an motor later on) — plus switch out its ECU unit less than 50 laps earlier went on to score its first win stage of the season. Impressive.

During the final stage, Crafton remained competitive, although he dropped to 11th on a late-race restart. Fortunately for the No. 88 bunch, chaos ensued with intentional wrecking, middle-finger salutes and yelling matches on the radio. Crafton crossed the finish line in sixth.

The performance is Crafton’s 19th consecutive top-10 result at Texas, the longest streak for any driver at a single track in Truck Series history. This veteran knows how to get the job done in the Lone Star State.

Despite the resilient rebound, the No. 88 truck enters Martinsville 12 points below the cutline, currently held by Zane Smith.

Dustin joined the Frontstretch team at the beginning of the 2016 season. 2020 marks his sixth full-time season covering the sport that he grew up loving. His dream was to one day be a NASCAR journalist, thus why he attended Ithaca College (Class of 2018) to earn a journalism degree. Since the ripe age of four, he knew he wanted to be a storyteller.
@@DustinAlbino
Previous Autotrader EchoPark Automotive 500 Postponed to Monday
Next Lewis Hamilton Wears the Crown after Winning the Portuguese Grand Prix 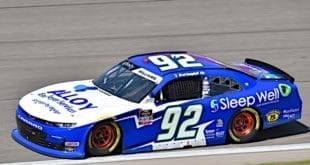