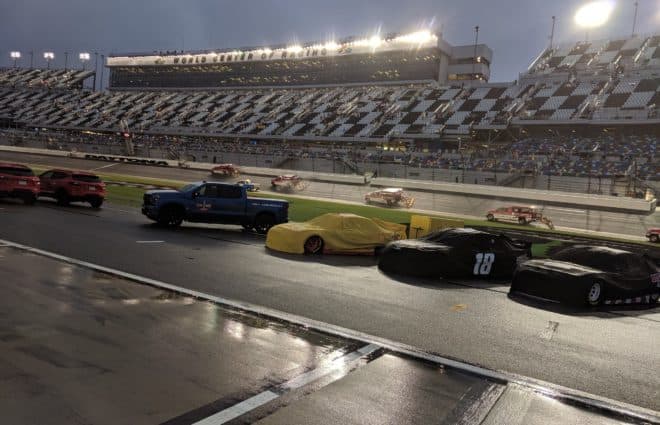 Did You Notice? … The rain delay at Texas Motor Speedway is extending into record-setting territory? As I write this column, we are on our third postponement of a race scheduled to run Sunday, Oct. 25. A misty light rain has fallen seemingly forever, pushing back the start to at least Wednesday at 3 p.m. ET on NBCSN. It’s the first race in the modern era to be pushed back three consecutive days due to rain.

52 laps are complete but NASCAR’s inability to stop the race before misting cost some drivers dearly. Kevin Harvick is off the lead lap after smacking the wall off turn 2 … and he’s not alone. Denny Hamlin lost precious track position sliding up in the same area. So did rookie Cole Custer, while Chris Buescher is already 10 laps down after wrecking.

You may think pushing back to Wednesday makes this race the longest NASCAR red flag in history. You’d be mistaken (Hat tip to Frontstretch’s Zach Sturniolo for this one). On March 11, 1973, NASCAR was forced to stop a Cup Series race at Bristol Motor Speedway due to rain after 52 laps. They waited two weeks to come back and finish. Didn’t matter to NASCAR Hall of Famer Cale Yarborough; he wound up leading all 500 laps of the event, setting a modern-era record.

This race isn’t the weirdest red flag for rain I’ve seen either. Here’s a few doozies that come to mind in my time. (Keep in mind I’m a millennial, albeit just barely. So if you have an older, crazier story about NASCAR rain delays, please feel free to share in the comments! We’re all in this together.)

Fontana, 2008. I will never forget this race for as long as I live. A rare set of heavy rains drenched the track all weekend at Auto Club Speedway. Back then, this race was the second event on the NASCAR schedule and teams had made the cross-country trip 3,000 miles after the Daytona 500.

The west coast swing was designed to provide good weather during a time when the east coast is buried in winter. So to have moisture was frustrating enough. But the track didn’t hold the rainwater well, and unseasonably cold temperatures made it difficult to dry out. Cup qualifying and races in lower series were all pushed back heading into Sunday’s main event.

Just like at Texas, NASCAR tried to give it a go. But even under cloudy skies, so-called weepers seeped in from under the track’s surface and moistened up the pavement. Slick spots caused two hard crashes that wiped out top-tier drivers like Denny Hamlin, Dale Earnhardt Jr. and Casey Mears.

“The track ain’t ready,” Earnhardt said after his wreck. “It was dirty. Bad move.”

By lap 41, the caution flew for rain. NASCAR decided to halt the race and send track workers out with saws to cut through the pavement, bleeding out moisture. The red flag lasted over an hour but it was all for naught when rain fell again, pausing the race with 87 of 250 laps complete.

NASCAR continued to dry the track for over four hours, creating a scenario where the race wasn’t officially called until almost 2 a.m. ET the next day. It caused a 16-hour workday as the culmination of a weekend of constant delays and postponements, held one week after the most important race of the year. To add insult to injury … officials didn’t spread the word to everyone. Half the TV compound, among others in the garage, didn’t know the race was called until NASCAR officials had left the track.

In four years of working that particular job in NASCAR television, it was the most frustrated I’ve ever been at a racetrack. Carl Edwards wound up winning the next day and joked, “I can’t say enough about my snorkel and floatation device. The guys at the dive shop really came through for me in a major way.”

A fellow TV worker made light of the situation in a few weeks and made T-shirts for everyone called, “Don’t Weep for Me Fontana.” Twelve years later, though, just thinking about that mess still drives me crazy. Indianapolis Motor Speedway had their tire debacle later that year, so people often forget about this California mess. But that weekend did as much to cement the long-term damage at Auto Club Speedway than having it replace the Southern 500 on Labor Day Weekend.

Michigan, 2007. This race was the Texas two-step before the Autotrader Echopark Automotive Downpour 500 eclipsed it this week. Michigan International Speedway became the first race in the modern era to be delayed two consecutive days after heavy rains and fog drenched the track.

Kurt Busch wound up winning the event in what was a short turnaround for race teams. Bristol Motor Speedway’s August night race ran as scheduled that week. That meant everyone flew home Tuesday late, then turned around for haulers to enter Bristol by Thursday. It’ll be a similar setup for teams at Texas; they’ll rush home after Wednesday’s race (we hope) to prepare for Martinsville Speedway on Sunday.

Daytona 500, 2012. This event was the first Daytona 500 postponed in the 54-year history of the race. Rescheduled for a Monday night in primetime, the move came after officials tried to dry the track for four hours.

What transpired was one of the wackier Daytona 500s in recent memory. Remember how Juan Pablo Montoya found a way to hit the jet dryer under caution?

The incident caused a red flag with 40 laps to go as track workers had to put out a giant fire in turn 3. In the end, Matt Kenseth came out on top and holds the unique distinction of winning two Daytona 500s affected by rain. (His other victory, in 2009, was shortened by 48 laps due to a downpour).

1993 Atlanta. Practice and qualifying for this race went on under the black cloud of a brewing storm. On Sunday, the decision was made to postpone a full week after there was no chance for NASCAR to clear the track.

But the issue wasn’t rain. Instead? A blizzard enveloped the area. More than three feet of snow fell in the mountains outside the track while 50-mph winds turned visibility to near zero. Over $300,000 in damage to Atlanta Motor Speedway was reported, although the oval turned race-ready by the following Sunday.

According to USA Today’s Mike Hembree, there was one driver who stuck in the garage through the blizzard. Reigning NASCAR champion Alan Kulwicki and his team were there working on the No. 7 car after a disappointing start to the year. It was the type of work ethic that won the independent driver the 1992 title; sadly, he’d crash out in this race and be killed a month later in a plane crash heading to Bristol.

Here’s another trivia question. Who won the Atlanta snowstponement? None other than Morgan Shepherd, earning the final Cup victory of his career.

Did You Notice? … One quick hit before taking off…

It’s easy to forget a wreck at this track, off the same turn, killed Tony Roper back in 2000. There should have been discipline here, and I’m surprised NASCAR didn’t do something.

The author of Bowles-Eye View (Mondays) and Did You Notice? (Wednesdays) Tom spends his time overseeing Frontstretch’s 30 staff members as its majority owner. Based in Philadelphia, Bowles is a two-time Emmy winner in NASCAR television and has worked in racing production with FOX, TNT, and ESPN while appearing on-air for SIRIUS XM Radio and FOX Sports 1's former show, the Crowd Goes Wild.
@NASCARBowles
Previous NASCAR Mailbox: What Benefit Have Sunday Doubleheaders Been to Xfinity and Trucks?
Next Eyes on Xfinity: Josh Williams Hospital Tour Taken to Another Level