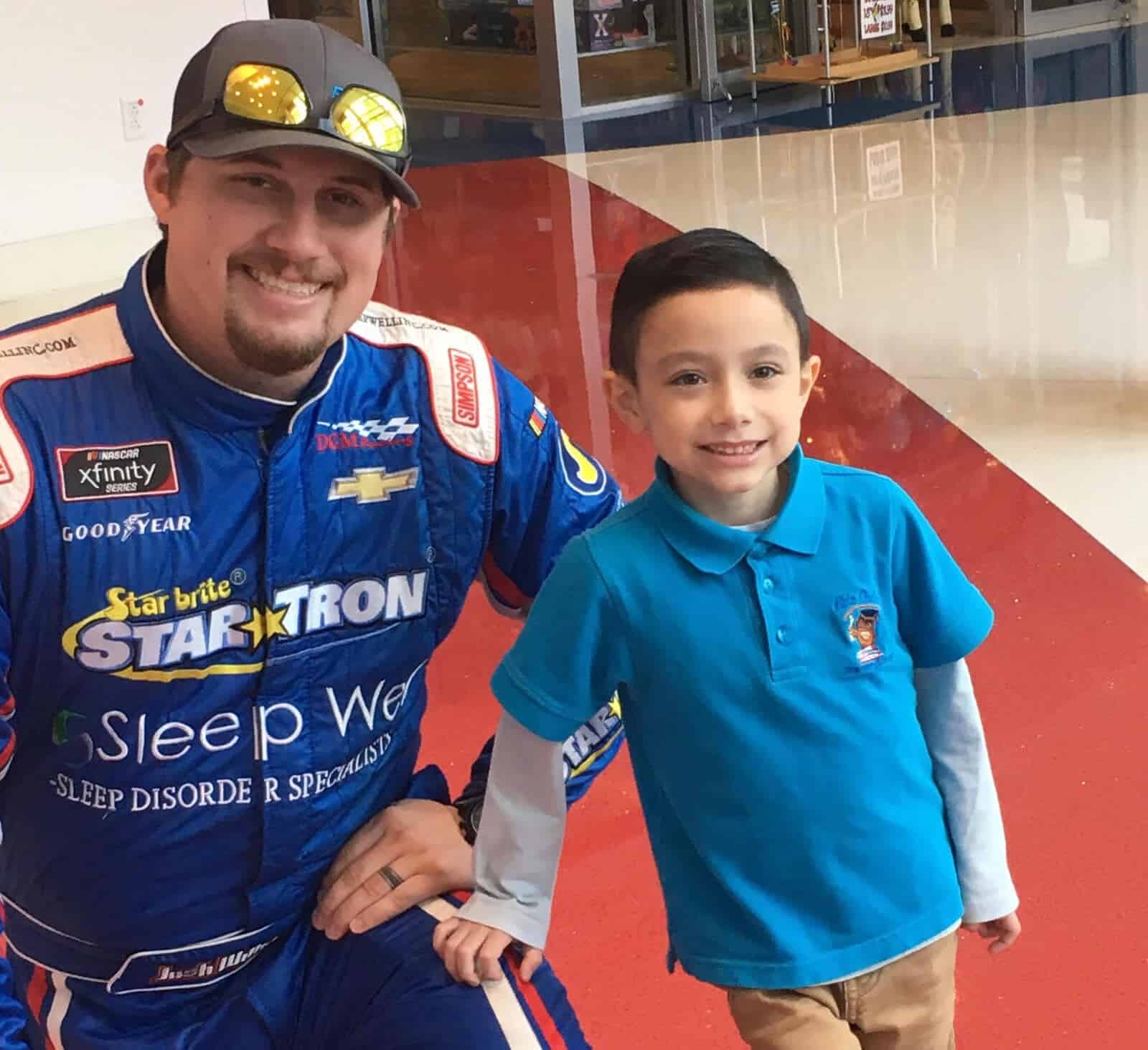 Josh Williams is a racer’s racer; one who will turn wrenches on his racecar during the week, only to beat and bang with that same chassis during the race weekend.

Behind the helmet, Williams is fearless, doing his all to overachieve with his underfunded DGM Racing team. Outside of the car, though, the 27-year-old is someone who will go out of his way to make others happy.

Prior to the 2015 ARCA Menards Series season beginning, Williams was unsponsored, hoping to run his family-ran No. 6 car full-time. He was coming off a 2014 season in which he competed in 11 of 21 races, scoring a handful of top 10s. In his first full-time ARCA season one year earlier, he finished fifth in the championship standings, earning one top-five finish.

Hoping to run the duration of the 2015 ARCA schedule, Williams didn’t want a blank racecar. That’s when a mutual friend of his team reached out to Williams, noting, ‘I have a friend and she’s really struggling. She’s from Florida, her daughter is in Florida and you’re from Florida, so maybe we do something with this.’

The woman’s daughter turned out to be Anya Cale, a young girl with leukemia.

Williams’ team elected to host Cale and her family for the season opener at Daytona International Speedway. That’s when the idea began to float around about running a scheme with the sponsor being “Team Anya Cale/#BeatLeukemia.”

In the 200-mile ARCA Daytona race, Williams went on to complete all the laps and finished ninth.

Following the Daytona race, Williams kept in touch with Cale’s family. He went on to visit her one month later at Saint Joseph’s Children’s Hospital in Tampa, Fla., where she fought cancer.

“We ended up going to meet [Cale], and we brought the car with us,” Williams said. “We did like a little meet-and-greet deal.

“It’s different when you’re there and you get to see it. A lot of people are supportive, but if you go there and meet these kids, meet their parents and see what they’re going through, it makes you appreciate what you feel is a bad day.”

After realizing how much joy he brought to Cale and how genuine their connection was, Williams’ marketing agent, Meghan Henriques, thought of an idea: what if her driver visited children’s hospitals around the country, in nearly every market the series visits to help bring out smiles.

One simple hospital visit turned into two. That quickly doubled to four. The number continued to increase drastically, so much so that there was a three-year stretch where Williams was doing more visits per season than races.

Though not exact, Williams is inching close to 200 children’s hospital tour visits across roughly 75-100 different hospitals.

“He averages 25-30 per year,” Henriques said. “We’ve done a bunch of one-offs, and we’ve had people call and request him to visit. We’ve gone out of market a couple times as well. […] That’s typically how we plan it: He’ll fly in a day early, and we’ll do these visits. When we did the northeast, we did four in less than 24 hours.”

During the in-person visits, Williams simply wants to make the kids smile and forget about the battle they’re facing. It’s completely changed his perspective on life.

“If you think you’re having a bad day, you just think about that family that’s been struggling,” Williams added. “They’ve still got to go to work so they can pay their hospital bills, they get off of work and go straight back to visit their kid. They don’t know what tomorrow is going to bring either.

The hospital staff takes notice of Williams’ efforts, too.

“During his hospital tours, Josh brings many smiles to our patients,” Kyrstle Hunter, M.A. Certified Child Life Specialist at Sunrise Children’s Hospital in Las Vegas said. “He knows how to have fun and relate to each child. We look forward to his visits every year knowing how much joy they bring to the children.”

Due to the COVID-19 pandemic, the hospital tour visits have turned virtual, at least for 2020. Because of that, it’s been harder for Williams to link up with the hospitals, though he’s still done roughly 15 visits. Just two weeks ago, he was playing virtual Bingo — Disney edition — from his Concord, N.C., race shop with 200 kids from Levine Children’s Hopsital in Charlotte.

To set up the virtual visits — and all visits, Henriques will get ahold of the Child Life Services department and give them examples from previous visits. She then will send “kits” to each individual hospital. In August alone, she sent out 50 kits containing hero cards, explaining what the team is trying to accomplish.

“It was a tedious two weeks,” she said of sending out the kits this year. “Early in the pandemic we knew we weren’t going to be able to do anything.”

Though Williams misses being around the kids in person, he still enjoys the ability to see their faces, even if it is remotely.

“It’s different because you don’t get the same effect with being interactive with the kids,” he said. “It’s still cool because they get to see me on the iPad or whatever they’re using, but it’s not the same effect as going in person.

“I’ve got a different energy, so I can’t show them that through the screen. I try to do the best I can. Every little thing counts.”

After a three-year hiatus, Musselman’s hopped back on board in June to be the presenting sponsor of the hospital visit tour. In the Xfinity Series season finale next weekend at Phoenix Raceway, Williams’ No. 92 Chevrolet will be wrapped with many handprints of kids he’s visited with (like the past two years with Star Brite/Star Tron sponsorship), while their names will be placed on the sides of the car behind the number. This year, those handprints were collected by the individual hospitals and sent to Henriques via mail, whereas previously, the driver would paint his hands along with every kid who wanted to see him and collect theirs, too.

“Josh asks if they want to do the handprint, ‘You’re going to be on my car, you’re going to be famous,'” Henriques recalls him telling the kids. “That’s how he breaks them down and they all do it.”

Musselman’s is proud of Williams’ efforts of bringing the kids joy.

“Josh Williams’ unique devotion to visiting children’s hospitals is a big reason for Musselman’s support,” Kevin Blackner, marketing director for Musselman’s, said. “He’s truly one of a kind, as we learned when we first started working with him. […] It’s a great partnership, and we couldn’t ask for a better brand representative.”

On the racing front, Williams is having a breakout season with DGM, piling up six top-10 finishes, three of which have come in the last four races. Heading into Martinsville Speedway this weekend, he’s on a streak of consecutive top 10s for the first time in his career, sitting 15th in the points standings.

But regardless of what his success rate is on the racetrack, he intends on doing hospital visits for a long time to come.

“We’ve done this numerous times and not have any publicity from it,” he said. “It’s something we enjoy doing, and I’m going to continue to do it, regardless if there’s no benefit from it. My benefit from it is making somebody’s day a little bit brighter because I’m a pretty fortunate individual to be healthy and be able to live my dream. I want to give back and do as much as I can.”

Henriques doubles down on that, remembering something Williams once told her: ‘I don’t care what level I’m at, I’m going to do this for the rest of my career.’

Go Josh, this is Holly from your old pediatricians office. So happy for you and your race. Career. So thoughtful of you to visit all those children.