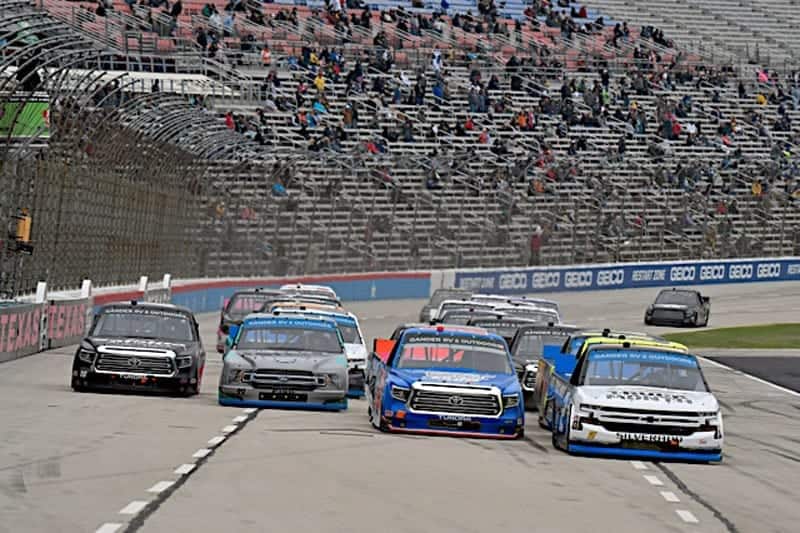 As a result of the pandemic, we have seen several doubleheaders this year between all three NASCAR national touring series, something we have not seen before this year.

In past years, the lower divisions of NASCAR have not had the exposure they deserve because of being ran on Friday nights or Saturday afternoons for the most part. While Saturday’s are still a predominant day, we have seen Sunday mornings be more of a day for the Gander RV & Outdoors Truck and NASCAR Xfinity Series to be part of the feature.

What benefit has this been for both series? Do you see this being more common next year? Do the single-day shows truly make this doubleheader format thrive?

Following the Truck and Xfinity races at Texas Motor Speedway this past weekend, there were several feuds we have to keep an eye on for Martinsville Speedway. We have seen in the past where NASCAR has taken action if retaliation affects the championship, most recently in 2015. The debate here is if NASCAR can step in beforehand to try and prevent it from happening, or is this a bad thing for the sanctioning body to do?

What could be the best way for NASCAR to get their message across? Is threatening a harsh penalty during the week the way to do it? Will we ever see this actually come into fruition, or will retaliation just always be a part of what cannot be controlled?

Q: What benefit has the lower series had this season with having doubleheaders on the same day with Cup? Marshall T., Reno, NV

A: The COVID-19 pandemic has allowed this to happen for the Xfinity and Truck series, which more than likely would not have happened had the world stayed normal. If there is any positive coming out of 2020, it would be that these series got exposure they may not have had prior to the start of the season.
For the Xfinity Series, their doubleheaders with the NASCAR Cup Series have been home runs. While fans have only been able to attend a few Xfinity races, the people at home were given a chance to watch arguably the hardest cars to drive. Again, there have not been many at all, but it does help when you race on the same day as the premier series of the sport.
For the Truck Series, everyone who watches on a regular basis knows how entertaining this series always is. Newer fans who might not have known about this were given the chance to be introduced to a type of racing they probably never believed was a part of the sport. Just look at this past Sunday at Texas: fans were given the chance to attend the race on Sunday morning, and starting that race at noon EST made it even more perfect.
Ratings have not been extremely great this season for those series, but having the races opposite Cup on the same day have helped overall. Arguably, Xfinity and Trucks are both more entertaining than Cup, and they both deserve more exposure than what they have gotten in previous years. This season helped that matter, and it should for years to come too.
Should NASCAR keep doing this in the future? I would say go for it. Of course I feel that each series deserves the spotlight, but if they can swing it and need to do it, then try it out. We know one-day shows will be the majority next season, so why not try it out some more and see how it goes. When the world is normal again, that is when it will really be tested.
Fans have said for years that doubleheaders have been something they wanted with the lower series, similar to what Atlanta Motor Speedway had been the last few years with an Xfinity race and then Truck race. More than likely, the schedules will be more normal for 2021 and beyond, but many people would probably not be against the idea. My hope is they do not go overboard, but a few of these per year? Sure, I’m on board.
Q: Should NASCAR step in beforehand if retaliation is threatened to anyone at Martinsville, especially if they affect their championship hopes or jeopardize anyone’s safety? Frank N., Gulfport, MS
A: Sadly, NASCAR cannot do much during a race except warn drivers for if they do in fact retaliate. We have seen that countless times. Beforehand though? That seems like a bit much to ask, even though it could prevent certain key moments from happening.
Everyone knows that if a driver wants to retaliate from previous weeks, a short track is going to be the place to do it. There are several current feuds going on at the moment, and we have not even seen a full Cup race yet this week. We could even get another one for that race this upcoming Sunday.
If NASCAR stepped in and warned drivers of big penalties if they were to do anything before they even arrive at the track, then you can definitely prevent something big from taking place. I never really see them doing this though, just because you never know what is going through a driver’s head when they talk about retaliation.
When Matt Kenseth intentionally wrecked Joey Logano at Martinsville in 2015, that was the first time in four years NASCAR stepped in to suspend a driver for intentional wrecking. Kyle Busch previously had that happen after his intentional wrecking of Ron Hornaday Jr. at Texas Motor Speedway in the Truck race in 2011. NASCAR has definitely set a precedent for what they would do in a circumstance like that.
One main reason why NASCAR should not step in beforehand? Where is the fun in that? Part of the fun we see in the sport is how other drivers will race each other when they are mad. Short track racing especially is about the aggression we see and the close racing too. Of course you want to see it be clean, but part of it is the bump ‘n run and some body slamming going on as well.
Martinsville has never been the penultimate weekend of the season, and now in a time where it is a cutoff race to determine the Championship 4, it is more vital than ever. Not sure if we will see another Kenseth retaliation, but expect NASCAR to step in big time if we see see something similar. You never like to see a championship affected like that, but it does happen, and NASCAR will tolerate that very heavily no matter which series it takes place in.