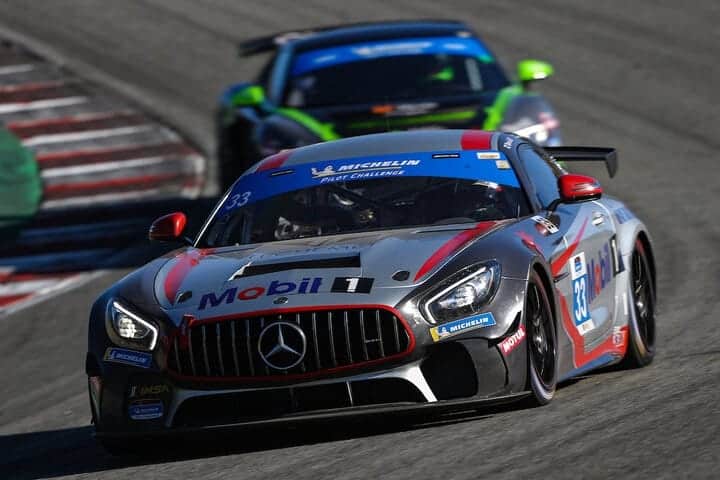 For Michelin Pilot Challenge, they will have their smallest grid of 2020 this weekend at WeatherTech Raceway Laguna Seca.  Only 26 cars are currently entered for this weekend’s two-hour event.

In Grand Sport, only 18 cars are entered.  The most notable absence from the entry list is Automatic Racing with their Aston Martins.  They won’t be making the trip.  In addition, the part-time M1 Racing LLC team (also known as NTe Sport) that essentially totaled their Aston Martin at Michelin Raceway Road Atlanta and raced a borrowed Porsche won’t be there.  Same for the No. 10 Mercedes that ran under the LAP Motorsports banner.

Likely the biggest driver change of the weekend is Scott Maxwell stepping out of the Multimatic Motorsports Ford Mustang GT4.  In his place will be Hailie Deegan, who will make her second career start in Michelin Pilot Challenge alongside Sebastian Priaulx.  Deegan made her debut at Daytona back in January alongside Chase Briscoe.  Deegan qualified 19th overall, but ran into problems in the race and finished 29th in Grand Sport, 43rd overall.  While WeatherTech Raceway Laguna Seca isn’t particularly close to her hometown of Temecula, Calif. (it’s a nearly 400-mile drive), this is the closest IMSA Michelin Pilot Challenge race to Deegan’s home.

As Devin Jones continues to recover from his nasty practice crash at VIR, BimmerWorld Racing has made a change in the No. 82 BMW.  Greg Liefooghe has replaced for this weekend with Mike Skeen.  Skeen has spent much of the season racing in Trans-Am competition, but also made a one-off appearance with NEMCO Motorsports in the Gander RV & Outdoors Truck Series at Daytona in August.  Liefooghe moves over to the team’s No. 80 BMW to replace Dillon Machavern alongside Nick Galante.

Murillo Racing has put Kenny Murillo in the No. 65 Mercedes-AMG GT4 for this weekend, replacing Brent Mosing.  Murillo (son of team owner Ken Murillo) will be making his second start of the year, but he’s had success in lower levels of racing previously.  He’s raced only intermittently since a crash in TCA competition at Lime Rock Park in 2018.

Finally, CarBahn Motorsports with Peregrine Racing will have Sameer Gandhi in the No. 93 Audi in place of Mark Siegel.

The TCR class is down from 13 cars to eight for this weekend.  All the part-time teams will not be making the trip (Atlanta Speedwerks, AOA Racing and Copeland Motorsports), along with LA Honda World Racing’s No. 73 Honda.

Of the eight teams that are making the haul to California, there are no changes.  The three full-time Bryan Herta Autosport Hyundais top the standings with Mason Filippi and Michael Lewis on top with two races to run.

The Michelin Pilot Challenge race is scheduled to go green at 6:35 p.m. Saturday.  The race will be streamed live on NBC Sports’ TrackPass service.  The race will air in highlighted form on NBCSN Nov. 9 at 1 p.m.