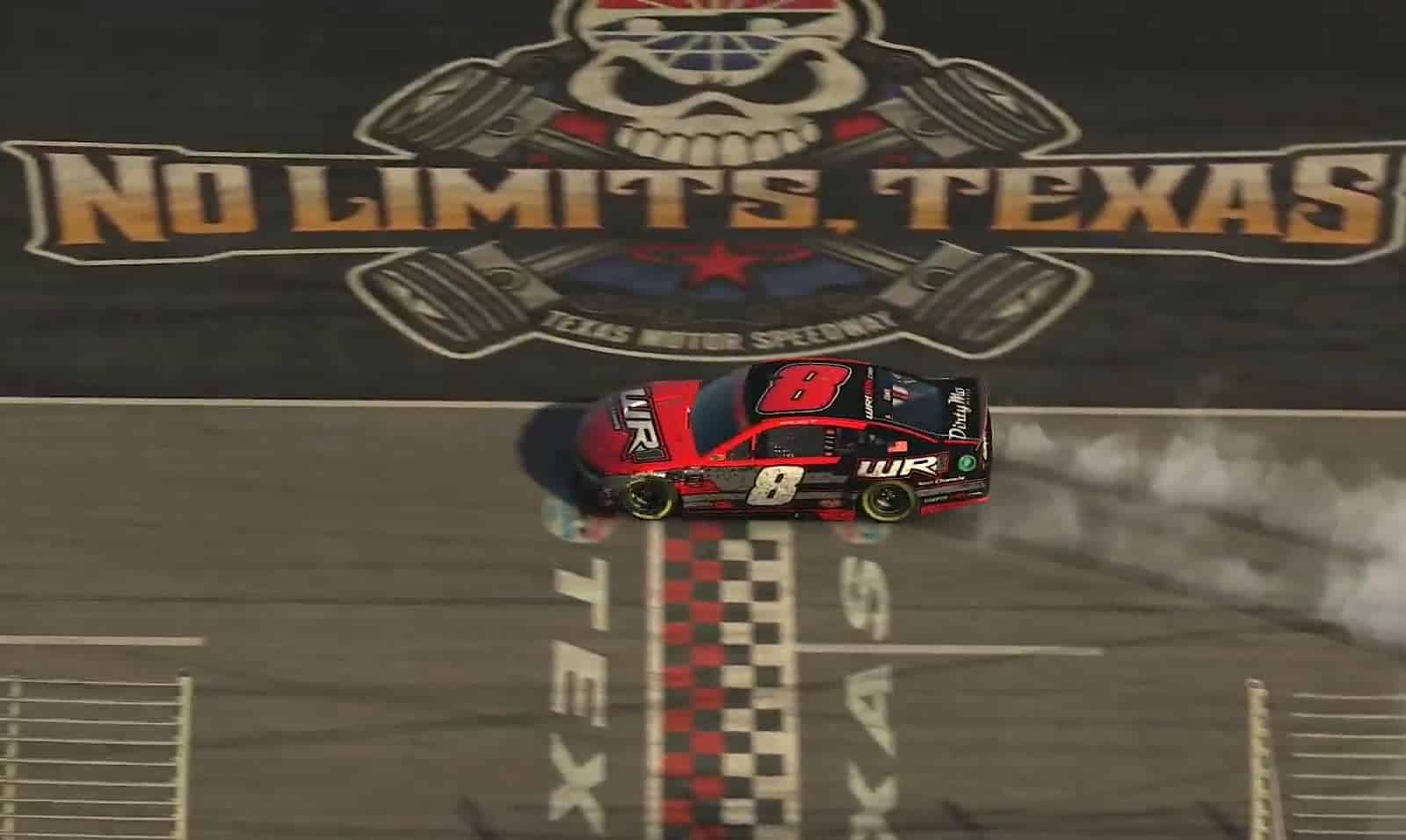 Michael Conti needed a win to ensure a chance to race for the eNASCAR Coca-Cola iRacing Series championship, and he did just that at virtual Texas Motor Speedway on Tuesday night, Oct. 27.

Conti, who led 73 laps, had a little bit of defensive help from his roommate Logan Clampitt in the final 25 circuits. Though Clampitt got turned with five to go, Conti still was able to hang on in overtime.

“I can’t believe this actually happened,” Conti exclaimed after the race. “This is just crazy. I have never been that excited to win a race before. I mean, I won a championship but I was monotone, this is crazy. This was the most intense season by far. To be in the spot we were in after the ROVAL where I had a money shift — I had a really bad time — to be in that spot, and to almost have it last week to have it ripped away and then… I thought we were going to just going to walk away with it tonight in that last run, then it got exciting again… It took two years to win but we did it at the right time.”

Conti’s JR Motorsports teammate Brad Davies avoided the carnage coming off the final turn to take second. Bobby Zalenski, who already claimed a spot in the final 4 with his domination at the Charlotte Motor Speedway ROVAL, placed third. Clampitt was fourth and Kollin Keister rounded out the top five finishers.

The race was a mixture of green-flag pit stops and wreck-induced cautions. During an early pit cycle on lap 69, Luza and Alfalla incurred damage when Alfalla attempted to pit. Luza wasn’t aware of this and tried going by Jarl Teien on the inside, but contact with Alfalla sent him into Teien.

CAUTION! And it has major playoff implications…

After the incident, Luza told the broadcast “the motor’s killed, so that’s the end of my night.” He survived the chaos in the end, though, and will race for a championship at Homestead-Miami Speedway.

Meanwhile, Conti and Clampitt strategized together to get Conti into first after the next wave of green flag pit stops. They worked their way into the front of the field just before the caution flew with 25 laps to go.

Chris Overland came off of turn 4 and bounced off the wall right into Chris Shearburn, which sent him around. The field returned to pit road under this yellow, and it looked like Clampitt would come out first. However, he slowed down for Conti to go by him and retake the lead in the closing laps.

The next yellow came out for Dylan Duval, who got turned around with about 16 laps remaining.

A late race caution sets the field up for a wild finish!

Then, soon after the restart, another wreck happened between Jim Beaver eSports teammates. Eric J. Smith appeared to come down from the high lane right on top of Michael Guariglia, who couldn’t avoid him. Smith hit the inside wall hard, suffering heavy damage.

None of these wrecks would compare to the one after the next restart. As the racing intensified, Clampitt got knocked out of line by Keister and couldn’t maintain control. He turned into another car and caused a melee on the backstretch.

It's an absolute junkyard on the backstretch! ?

Several cars were involved in this one, and it left Conti with no help in overtime. Keister and Graham Bowlin were chomping at the bits, trying every way they could to somehow get by the No. 8 Chevrolet. Keister pulled up next to Conti coming off of turns 3 and 4 but ended up turned, making contact with Bowlin. Their hopes for the victory were dashed, and Conti celebrated in style.

.@MikeConti5 entered virtual @TXMotorSpeedway needing a win to advance to the Championship 4.

And he delivered in a BIG way.

Here are the full results from Texas:

The season finale at Homestead comes Monday, Nov. 2 at 8 p.m. ET on eNASCAR.com/live.