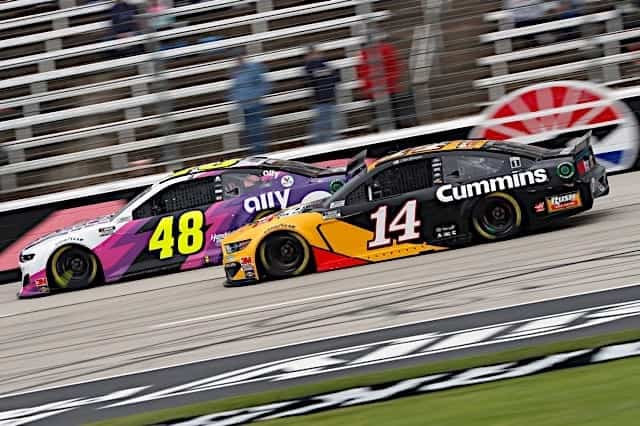 Kyle Busch hadn’t won a race all year, but he managed to squeak in a victory under the wire with just three events left in the season. Appropriately enough, his Skittles Zombie car fit both the time of year, with the race finally finishing a few days before Halloween, and the weather – the gray paint scheme fit several days’ worth of misty, foggy, rainy conditions perfectly.

Busch ran moderately well most of the afternoon but finished outside of the top 10 in the opening stage before his car started to come to him. The No. 18 won the second stage and was on rails the rest of the day, holding off teammate Martin Truex Jr. for the win. Additionally, despite elimination from the playoffs two weeks earlier, Busch kept his streak of 16 straight years with a Cup Series victory alive.

Truex was the biggest playoff story of the race, sitting seventh of the eight remaining postseason drivers coming into Texas. He leaves in the exact same position but with five extra points between him and the cutline. A win would have locked him into the championship finale at Phoenix.

It didn’t help that Truex’s spoiler was confiscated in pre-race inspection, causing the driver to lose 20 points in the standings.

Christopher Bell‘s third-place run was a spark from the No. 95 team that hadn’t been seen for months. Not since the first race in the doubleheader at Pocono Raceway had Bell and Leavine Family Racing scored a top five. With Bell moving to Joe Gibbs Racing in 2021 and LFR shutting down, it felt like a last hurrah for the stable.

Running a scheme paying tribute to LFR’s yellow-numbered, red-and-blue origins, Bell dueled with Truex for the runner-up spot for a while and seemed to have the raw speed to complete the pass. Truex’s car ultimately proved better, though – as it had against most of his competitors throughout the afternoon – and Bell had to settle for third.

Jimmie Johnson, the all-time wins leader at Texas, restarted second when the race finally got back underway and finished fifth in the opening stage. That’s when the No. 48 dropped off a cliff, with Johnson nowhere to be found near the front for the rest of the race – the next time his car was prominently featured came when he came to pit road on lap 279. With smoke billowing from the expired engine and the hood up on the car, Johnson’s day was done. Unfortunate, too was the bitter end to a solid paint scheme – designed by fan Noah Sweet, the scheme was representative of Johnson’s time in NASCAR and it just missed finishing off its debut.

Last week’s winner Joey Logano scored some points in the opening stage as well, but his car faded before seemingly coming back to him later on in the race. Logano finished 10th, a solid result for a team able to rest on their locked-in laurels until Phoenix.

Clint Bowyer led the field back to green at the start of the afternoon and took off, leading 89 laps – one short of Busch’s race-high 90 – as well as scoring the Stage 1 victory. Bowyer was a contender throughout most of the race, but his car also went away from him and a late pit stop relegated the soon-to-be-retiree to 17th.

The round of pit stops midway through Stage 2 set the tone for the rest of the race. Truex led with Kyle Busch behind him, and the pit cycle reversed the pair; Busch’s pit stop gained him the lead and he never looked back. Truex had the speed all day and nearly passed Bowyer for the Stage 1 victory, but Bowyer blocked him into oblivion down the backstretch and held on to the lead.

Busch had a scare late in the race, reporting that he thought the engine was about to let go as smoke filled the cockpit. It turned out not to be the case, as Busch said over the radio that he thought it might be the rubber buildup causing the issue, and the No. 18 cruised to the win.

Eliminations! While Kurt Busch is in a must-win situation, there are six drivers who could theoretically contend on points for the final three spots in the finale at Phoenix. Harvick has a comfortable margin and can clinch during the race, but Denny Hamlin and Brad Keselowski will be under fire from Chase Elliott, Alex Bowman and Truex for the final two transfer spots.

Harvick and Hamlin will likely get in. Their performances throughout 2020 have been nothing short of impressive, but to stick to the “2020” cliche, it’s entirely possible that a dark horse like Bowman sneaks his way in. Even Busch could win a spot in the final round at Phoenix, which would make Harvick and Hamlin the two drivers to make it on points instead of wins – something that would be hard to fathom even less than a month ago.

Let’s hope we’re not paying attention to the weather this week. After a red flag that lasted more than 72 hours at Texas, the teams can finally leave the Lone Star State to travel to and prepare for Martinsville. The paperclip-shaped Virginia track is a huge swing from the wide-banked Texas circuit, and a weekend without weather impacting the race sounds pretty good right about now. It seemed like the heavens realized that no race had been affected by precipitation for quite some time, so all of it was dumped on Texas at once.

In truth, it will be a game of watch-the-radar all weekend long. With Hurricane Zeta making landfall on race day at Texas and making its way through the southeastern United States through the week, it’s entirely possible that Martinsville could suffer delays as well.

How… does the round of eight shake out with one race to go?

Truex’s aforementioned predicament stayed the same – seventh before and after the race, but with an extra five-point deficit thanks to the inspection failure. While he’s in a very precarious situation heading into Martinsville, Truex has won the past two races there. Last year, he won the fall event in convincing fashion, leading 464 of 500 laps, and was out front for 132 circuits there earlier this year in June.

Logano is locked in, while Harvick and Hamlin are in good position to advance. Kurt Busch is in a must-win scenario due to his 81-point deficit, but the drama will come around the cutline; Hendrick Motorsports teammates Elliott and Bowman are both 25 points below that cutoff. Keselowski is 25 points above, so any misfortune to befall Keselowski early in the race is bound to lead to a dogfight between the two Chevrolet drivers for that final spot.

Don’t be surprised that if the two end up battling for that final spot, there’s going to be some paint traded and fenders bent in the late stages of the race. Neither has ever appeared in the Championship 4, and even more drama might result if a non-playoff driver wins and eliminates the chances of an automatic berth completely.

Keselowski +25 . Folks are forgetting that Brad has a bonified hot rod put aside just for Phoenix. He would really love to have that second championship at this stage of his career. I hope he gets it.

I echo your sentiment. The author forgets that Brad is only two points behind Hamlin. And Brad is no slouch at Martinsville himself.

KFB drove around Truex you moron.

100% right! Not only did Busch thoroughly outrun Truex, he also did a masterful job of saving the exact amount of fuel he needed.

If Baby Busch costs Marty a win and Marty misses out on the Fake Four, that should make for some interesting meetings at Reverend Joe’s shop.

How did Busch “cost Truex a win”? He beat him fair and square – or don’t you think drivers are supposed to try to win? Furthermore, there is very little in the way of team orders at JGR. Aside from plate races, I’ve never seen any JGR driver give another one a break.

I didn’t mean to imply that Baby Busch didn’t deserve to win. What do you think is more important to Reverend Joe? A chance for a title for Marty or Baby Busch keeping his seasonal win streak going? What if Marty won at Texas and was leading at Martinsville with Baby Busch second. Would Baby Busch be allowed to win? What if Baby Busch is going to win again (a definite possibility) at Martinsville with Marty running second and be eliminated from the chase? Would the order change?