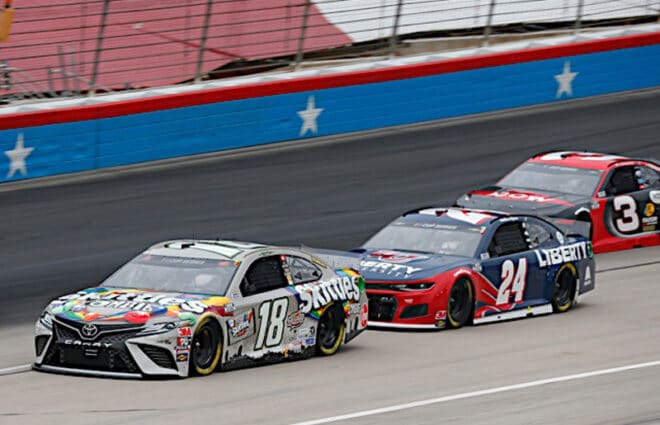 After a three-day weather delay, Kyle Busch won the Autotrader EchoPark Automotive 500 at Texas on Wednesday (Oct. 28) for his first victory of the season.

Early on, it was clear the race was going to be a strange one. Chris Buescher wrecked on lap six as the track was damp and mist filled the air. The race restarted without any delays and went green with Kevin Harvick in the lead until lap 22 when J.J. Yeley crashed, which served as the competition caution. There was a mix of strategies on pit road, with some taking two tires and others opting for fuel only.

Soon after the restart, Denny Hamlin got shuffled out of the groove and nearly hit the wall. He got out of the gas just before making any contact, but he fell back deep in the field. Laps later, Harvick hit the wall exiting turn two while leading.

Harvick tags the outside wall and will pit! pic.twitter.com/HfvtzvThaH

The field scattered around him, and Harvick pitted under green for a flat tire and to fix damage. Alex Bowman led until lap 43 when the yellow came out for rain, as NASCAR finally decided it had seen enough. On lap 52, the race was red-flagged after pit stops. Clint Bowyer sat in the lead.

#NASCAR looking to fire engines around 5 pm. NBCSN will be on air then.

The delay at @TXMotorSpeedway has topped 72 hours.

After the lengthy delay, the wild racing picked back up. Matt Kenseth got loose exiting turn four right in front of Hamlin, who suffered some nose damage. The real loser in the caution was Bubba Wallace, who Kenseth clipped and sent barreling into the outside wall.

Wrecking off of Turn 4!@dennyhamlin hits @mattkenseth who gets into @BubbaWallace 😱. pic.twitter.com/DOFrBaQv0o

Bowyer retained the lead though another green flag run and kept it after a restart following a debris caution. He appeared to be cruising to a stage win until Truex began to close late. With just a few laps to go, Bowyer laid a huge block on Truex and halted his momentum to seal the win.

Following some varying strategies on pit road, Bowman retook the lead for 26 laps until Joey Gase wrecked with help from William Byron to bring out the seventh caution. Again on pit road, teams took anywhere from zero to four tires as Blaney exited with the lead.

Blaney led on the restart but was soon passed by Truex, who kept the lead until green flag stops with less than 15 to go in the stage. The stops went smoothly for everyone except Chase Elliott, who had to pit twice after his tire started to come apart when he left pit road the first time.

That changes the playoff picture.

Truex, who ran himself out of fuel before pitting, gave up the lead to Kyle Busch and held on for the stage win.

Busch, Bowyer and a few others stayed out while most of the other leaders pit at the stage break. Bowyer seemingly didn’t get a full tank on his prior pit stop and was forced to pit outside of the final window with 77 laps to go. Busch was able to get to pit road with 66 laps to go and a sizable lead on Truex.

After green-flag stops cycled through, Bowyer went to the lead with Busch still up by over four seconds on Truex and Bell. Bowyer pitted with 23 laps to go for the final time and left it to the Toyota trio to battle it out. Without much of a threat from his Toyota teammates, Busch saved enough fuel and hung on for the victory. The win was his first in 34 races and the 57th of his career.

All season I expected Kyle Busch to win a race. He’ll turn it on eventually, I figured. Then, when he was eliminated in the Round of 12, I gave up on him. There’s no way he’ll win a playoff race when he still has two teammates alive, I foolishly thought. Finally, on a Wednesday of all days, he delivered.

The win was his first since Homestead last November. Between the pandemic layoff and all the complaints in the media, it felt like much longer.

Busch can continue to say he’s won in every full-time Cup season he’s run, at least for another year. This win could give him some great positive momentum heading into the offseason for a fresh start in 2021.

Truex stood out for good and bad reasons at TMS. His day ended with a second-place finish. Great on paper, but he still leaves seventh in points – a virtual must-win situation. Currently 36 points out of fourth, he would’ve been right there had it not been for a 20-point penalty for a confiscated spoiler pre-race.

The No. 19 was competitive all day at Texas despite starting in the back. Had a few cautions fallen his way, he easily could’ve locked himself into the Championship 4. Now, he’ll go to a track where he’s won the last two trips desperately seeking a third. Martinsville has been good to its namesake in recent years, so he definitely shouldn’t be counted out.

How about Bell coming through with his career-best finish while running a Leavine Family Racing throwback scheme? LFR is set to close up shop in two weeks, and this was a much-needed last hurrah for Bob Leavine. Leavine, who is headquartered in nearby Tyler, Texas, has been a great owner for the sport, and it’ll be sad to see him move on.

As for Bell, the rookie was in the mix most of the evening and looked for a bit like he could’ve passed Truex. He’s had an up-and-down campaign, and it’s a bright sign to see him running and finishing up front with his future teammates. Moving into the No. 20 at JGR next season, he’ll be expected to compete for a playoff spot immediately.

As has been the case so many times in his young career, Elliott just couldn’t catch a break at TMS. He looked to be a top-10 car in the first stage and most of the second. The tire issue put him a lap down, and he was unable to take the wave-around when a few leaders stayed out. Then, the race went green for the entire third stage as he sat a lap down.

Joey Logano’s win at Kansas already hurt Elliott’s Championship 4 chances, and now he’s in a near must-win position. Twenty-five points out is attainable with stage points and an issue for Brad Keselowski or Denny Hamlin. The problem there is that Keselowski and Hamlin are two of the sport’s best at Martinsville. To avoid elimination in the Round of 8 for the fourth straight year, Elliott is essentially forced to win at the paperclip.

Hamlin and Harvick were set back after their early issues before the rain delay, and they never really got back on track. Hamlin recovered to finish ninth, though he continues to be uninspiring in this playoff run. Harvick had handling problems seemingly all day and struggled to a 16th-place finish. It’s his third finish outside the top 10 in eight playoff races after just five such finishes in 26 regular season events.

Luckily for these two, they accumulated enough playoff points to put themselves in decent positions heading into Martinsville. Still, a surprise winner or a slip-up would undoubtedly cost one of them a title shot.

Anyone can win any race at any time. As I wrote earlier, I did not see Kyle Busch winning after he got eliminated from the playoffs. We haven’t seen a non-playoff driver win a playoff race since 2017, so my reasoning was valid. But with the talent already eliminated – Busch, Blaney, etc. – we can’t rule anyone out.

Would I bet on a non-playoff driver winning a remaining race at Martinsville or Phoenix? No, not if my life depended on it. Still, that clearly doesn’t mean it can’t happen. We’ve established that I’m no Nostradamus.

Kyle Busch still has it. Overreaction after one fuel-mileage win? Possibly. He’s had one of the worst seasons of his career and he’s not a young gun anymore.

At this point, KB has entered the later stages of his career, which doesn’t mean he can’t win races and championships. Think of Jeff Gordon in 2007 or 2014. He was competitive and right there for the title even as he was past his prime. Busch is one of those drivers that should age really well and be able to compete into his 40s.

Every 500-mile race at TMS feels long, and this one was no different. Sure, there was a 72-hour rain delay. In the Sunday portion of the race, there was moisture and slippage that made things crazy. Then, the initial laps on Wednesday were chaotic as drivers got accustomed to the green surface. But once things got back to normal, ol’ TMS delivered a 118-lap green flag run to the finish.

This is not to call out Texas specifically. It’s a bigger problem – a problem I harp on almost every time we run a 500-mile race. Outside of the Daytona 500 and the Coca-Cola 600, there’s not much use for a race this long. At tracks like Texas and Atlanta, 400 miles easily does the trick.

This season, we’ve seen Jimmie Johnson run multiple Ally schemes. At TMS, he debuted another new design. Noah Sweet, a lifelong Johnson fan known as “Lefty,” designed the car and it was the best No. 48 scheme of the year.

Noah Sweet aspires to design race cars. Never give up on your dreams. 💜🖤💗

Thank you, @lefty_designs for helping us bring this car to life in Texas! 👏👏👏 pic.twitter.com/xSs7yd9YbY

Last year was a different story at TMS. Throughout the race, there were multiple comers and goers, including drivers outside of the playoffs in Daniel Suarez, Jimmie Johnson and others. This year’s edition had similar parody with Busch, Bell and Blaney around the front. 2019’s ending was more standard, though, as Harvick pulled away late for his third-straight Texas playoff win.

This year was slightly more entertaining, in my opinion. The caution-free final stage wasn’t ideal, but it did set up a fuel-mileage strategy that we rarely see anymore with stage racing. An unexpected winner also adds to a race’s value, and that’s the case here. Texas is still Texas, which is to say ”not great,” though 2020’s edition was OK.

Nobody joined Logano in the Championship 4. The three drivers in position currently have a sizable points cushion, although that can be erased pretty quickly if things go wrong at Martinsville. If any of Elliott, Bowman, Truex or Kurt Busch win, the three currently in position will all be in trouble.

At this point, the four on the outside essentially have to win. All four are capable, as they’ve each won this season, including Truex at Martinsville in June. Harvick, Hamlin and Keselowski all cannot clinch on points with a certain finish on Sunday, so we’ll likely have all three spots up for grabs the entire afternoon.

As we head to @MartinsvilleSwy, three spots in the Championship 4 remain up for grabs. #NASCARPlayoffs pic.twitter.com/lHc0penEo4

After a season full of unexpected twists and turns, the Cup Series heads to Martinsville next Sunday (Nov. 1) for the penultimate race of the season. The Xfinity 500 is set for 2 p.m. and will conclude the Round of 8, as the final three spots in the Championship 4 will be determined. After battles in recent years between Elliott and Hamlin or Truex and Logano, Martinsville’s playoff race rarely disappoints.

Previous 2-Headed Monster: Is Rudy Fugle the Answer for William Byron?
Next The Big 6: Questions Answered After the 2020 AutoTrader EchoPark Automotive 500 at Texas