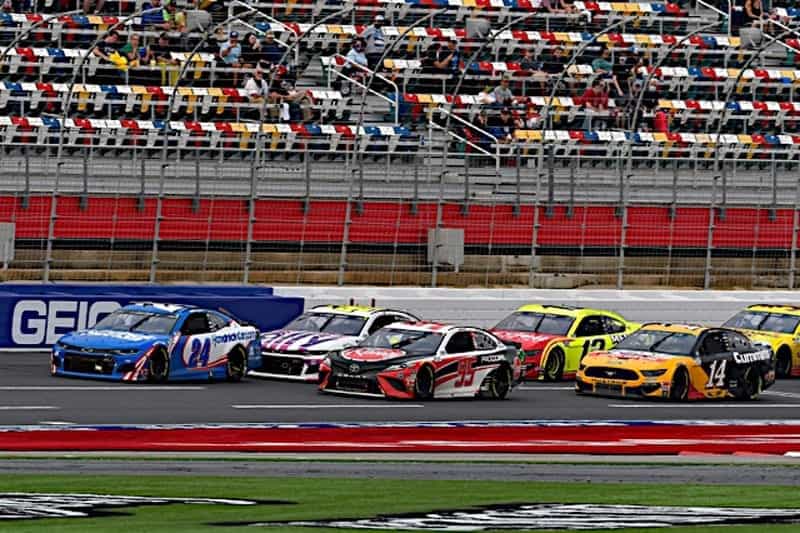 In a crazy season in a crazy year, there are still some positives coming out of it for NASCAR.

It looks like TV ratings will fall at about the same level as they did in 2019, just a percentage point or two. This is actually great news, as NASCAR’s audience has stayed much more stable compared to other sports’ numbers this year.

The two biggest moments ratings wise came during FOX’s coverage of the season.  To begin the season, President Donald Trump visited the Daytona 500. For NASCAR on that day, he was a huge needle-mover. While the race ended up being postponed by a day shortly after Trump left the facility, the pace laps and then the first 20 laps for the 500 drew an enormous rating.

.@FoxTV earned 10.935 million viewers for the 20 laps of yesterday's #Daytona500, which was eventually postponed till today, up 19% from the full-race average of 9.184 million last year.

The other was the very first race back from the COVID-19 break at Darlington Raceway. The 400-mile event, won by championship favorite Kevin Harvick, drew over 6 million viewers, an almost unheard-of number for a non-Daytona race.

A big day for live sports … @NASCARonFOX returns in style.

While the ratings will be lower year-to-year for the Cup Series, this year also deserves a caveat as the sanctioning body was forced to experiment with midweek races.

The midweek races just did not work ratings-wise, for the simple reason that nightly news shows exploded in ratings in the wake of COVID-19 and nationwide protests/riots. Demographics also just don’t make sense for midweek races, as the NASCAR audience is generally pretty old and white.

That demo has a weeknight routine of either news shows or baseball; they really didn’t come out that much for midweek racing. The only way midweek events would work would be to have a dedicated, 30-weeks-a-year series in a consistent time slot. That might well attract fans in the coveted 18-45 demo over time, but it would involve a lot of investment on the part of the sport and probably wouldn’t be worth it

Without midweek races, there’s a decent chance NASCAR either stays steady on the year or maybe even has a tiny gain. And the Bubba Wallace/confederate flag controversy had little obvious effect on the ratings; while NASCAR cheated a little bit by having races that were going to improve year to year no matter what in that time period, there hasn’t been a massive drop off in any metrics since early June. Either a mass boycott of the sport didn’t happen or those who left were replaced by new race fans.

It’s not fair to compare attendance to last year, both because no real numbers are released in that metric and due to the complications surrounding COVID-19. Not a lot of races had fans in attendance, with all that did having reduced seating and having to contend with economic factors such as massive job losses.

What about the ownership atmosphere in the Cup Series?

As far as teams go, the results are very mixed for this season. Cup owners Jay Robinson, Bob Germain and Bob Leavine are leaving the sport, while Archie St. Hilaire’s Go FAS Racing has downsized to a part-time effort.

In their place, three new owners will be fielding cars full time in 2021. B.J. McLeod has acquired a charter for his race team in a partnership with Matt Tifft and Joe Falk, while Justin Marks returns to NASCAR heading Trackhouse Racing Team.

Of course, the big news in this category is Michael Jordan. With Denny Hamlin, His Airness has launched 23XI Racing, becoming instantly the most famous person ever involved with NASCAR. Jordan should be able to pour money into this team for years to come thanks to sponsorships and his own immense wealth. It’s not a given that Jordan will attract fans, but it definitely seems to be a possibility based off media attention and poll data.

Did Ben Rhodes cross a line?

With the Cup race at Texas being postponed all the way to Wednesday, the big story coming out of this past weekend was Ben Rhodes in general.

Rhodes, who honestly is a veteran of this series and should know better, decided to wreck Christian Eckes for third with three laps to go in the Gander RV & Outdoors Truck Series race at Texas Motor Speedway, sending Eckes hard into the wall and forcing Rhodes to pit under caution to repair the damage. Yes, the playoff driver wrecked the non-playoff driver with three laps to go.

Then, Rhodes caused the final caution of the race by crashing into Josh Bilicki, ruining a top-15 run the underfunded Reaume Brothers Racing team had going, after contact from Chandler Smith. This led to both team owner Josh Reaume and Bilicki, both usually mild-mannered, to send out some very not-mild-mannered tweets.

NASCAR was cool with Rhodes wrecking people at the high-speed Texas, of course.

NASCAR says it reviewed the Rhodes-Eckes wreck and spoke with Rhodes and don’t anticipate any penalties coming out of it. #nascar @NASCARONFOX

I have zero problems with a driver if they wreck somebody while attempting to win the race. The bedrock of the sport’s rising years of the 1990s were based on Dale Earnhardt doing stuff like that. I do have a problem with people wrecking drivers not in the lead on a high-speed racetrack like Texas, however.

And Rhodes’ follow-up behavior of doing it again was completely unneeded. It’s something to wreck people at, say, Bristol Motor Speedway. But NASCAR has rules regarding who can drive on intermediates for a reason, and it’s to prevent behavior like that. NASCAR should have given Rhodes a points penalty this week instead of sitting on its hands, because there’s a chance now of a firecracker going off at Martinsville Speedway this weekend.

Who will advance in the Cup Series race at Martinsville Speedway?

While Joey Logano waits on the final three to be decided, the current final three are all fairly comfortable. Two are recent Martinsville winners and the third is Harvick, who has been dominant this entire season.

Kurt Busch is officially in a must-win scenario. There is no mathematical way for him to compete for a championship at Phoenix Raceway without winning at Martinsville first. Truex could mathematically advance on points, but it isn’t very likely, being 36 points out. The Hendrick Motorsports duo of Alex Bowman and Chase Elliott are both 25 points out of the final three, so really the most obvious path for any of these four to compete for a championship is to win.

Harvick maintains a 42-point cushion on Bowman/Elliott, while Hamlin has a 27-point edge and Brad Keselowski a 25-point lead. If any of those four win, however, those cushions go away; Harvick would have 17 points over Keselowski for the final spot, while Hamlin would have just two points between himself and the Team Penske driver.

I might be a little bit hopeful for an exciting battle, but I think Elliott beats Truex to win this race, in large part thanks to the edge Hendrick has in its road course program, which usually translates to success at Martinsville. Harvick and Keselowski would be the two drivers advancing; this No. 11 team has struggled with consistency since the playoffs have started, and while Hamlin is very good at his home track, it’s hard to go with him due to that uncertainty.

State of NA$CAR? Confusion at how to fix what they screwed up trying to fix what wasn’t broke.

Well, they now have their token Black and token racist, so we’ll see how that shakes out among the fans. All that’s missing is their token female and I’m sure they will rush the next Princess Sparkle Pony up through the ranks.

Making the tv ratings sound good is a crock of crap. The ratings have been sinking for how many years now? The ratings dropped after the Wallace fiasco. The play off races have had the lowest ratings in years. Read the reports. This sport has lost 60% of its fan base in the last ten years. The ratings should have gone up when they had no competition from other sports and fans not being able attend in person. They didn’t. So using competition from other sports now as an excuse is bs.
Mike Jordan is not going to save the sport. Fans don’t like the stages or the play offs..They have catered to the tv networks and attempted to make it a tv sport. It hasn’t worked.

NASCAR needs to get credit for finding a way to get the entire race season in this year, even given the shutdown during the pandemic. Fox Sports and NBCSN deserve kudos for also making adjustments to accommodate the rescheduled racing.

However, the pandemic led to Bob Leavine to leave the sport, which is sad because he was a good owner. And while performance issues certainly were at play, Germain Racing’s departure was hastened by the pandemic, too.

Will the situation be the same in 2021? Probably, since progress on a vaccine has been difficult. With severely limited fan attendance, I wonder if some more tracks will be following Kentucky and Chicagoland off the schedule? The track owners are not bottomless pits of money.

Great article, though I disagree about the TV ratings. NASCAR was the only sport to actually complete their whole season schedule and even despite poor mid-week ratings, a lot of people had nothing else to watch for quite some time. So, they tuned in to NASCAR as the only sort of sports entertainment on television. The playoff ratings are down due to weather and the usual stale corps of playoff contenders rising to the top. Next year, I look to Blaney, Elliott and Bowman to be among then after the round of eight.

Not sure that kudos are due to Nascar for getting in a full season. IMHO that was a move to salvage the TV contract, no more no less.
I think the reality is that it is a business to business enterprise now. No longer driven by needing to keep the stands full, although that would be nice. Particularly if they buy the products from the Nascar owned concession company.
But no matter the show will go on and we will love it.