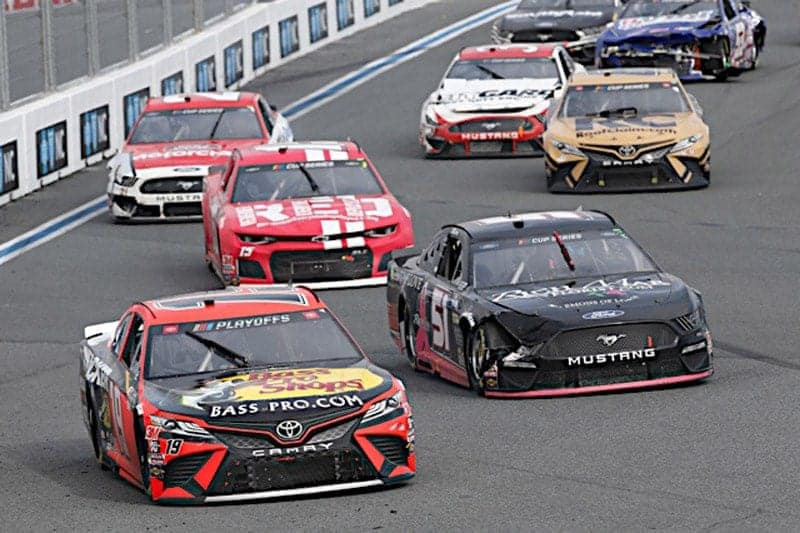 So, the 96 Hours of Texas Motor Speedway are over. There have been a lot of rain delays in the history of the NASCAR Cup Series, but this one was one of epic proportions. While it wasn’t the longest ever, it is apparently the longest in which the competitors didn’t leave the track.

Why did it happen? Because NASCAR didn’t have an option, which is why there is another change that needs to happen for 2021.

There are several changes coming to the schedule in 2021. Like them or not, they are made in an effort to appease the fans. If the sanctioning body isn’t going to eliminate the playoff element of the schedule, it needs to implement two more changes, at least, going forward: there needs to be an off-week the week before the playoffs begin and before the championship race.

Both of these dates serve two purposes. First off, they will provide a potential makeup weekend should we run into a scenario like we had this past weekend. Once the race didn’t happen Monday, NASCAR could have waved the white flag and planned to have the race the week before the championship. The same could occur if there were a rain event, or other reason to postpone a race during the run up to the playoffs. If something occurs, it allows NASCAR to move a race without disrupting the playoff schedule and still get in the entire regular season.

If a delay doesn’t occur, the weeks would allow for the contestants to receive the extra promotional coverage they deserve heading into the playoffs or the championship race. The measuring stick is always the Super Bowl. The NFL always has the week before the big game off so it can properly hype the match and the teams participating. Giving the playoff competitors and the final race championship contenders a week of hype will get everyone excited and give non-fans or casual fans a chance to learn more about them.

The exposure available on mainstream media would bring millions of eyeballs to the sport for the championship run or race that could lead to new fans and greater interest in the sport by fans and sponsors. The additional exposure for the car sponsors would provide them immense value and theoretically incentivize them to make a greater investment in the sport.

In addition to the exposure and hype, it would give the teams the opportunity to reset before the grind of the eliminations and for the championship contenders to have everything buttoned up to ensure their best effort in the final race. The longest season in professional sports takes a toll on everyone, and a week break before races 27 and 36 would do everyone some good.

Here’s to thinking that the sanctioning body will use their heads and build this cushion into the schedule. The dual purpose aspect of the weeks is undeniable and would help bring massive exposure to the playoff and championship teams while also giving them a chance to regroup.

It certainly is logical to have off weekends at those points but I don’t see how they could unless they either extend the season or forgo off weekends earlier in the season. We did see what is possible this year with mid-week and double header races so it is feasible but my impression was that ratings suffered. Hard to tell how at track attendance would suffer since Covid made it moot this year but I would assume negatively as well. I also doubt that those weeks off would bump interest much because most sports media outlets pay little attention to NASCAR. Only big wrecks get exposure in mainstream media.

Or how about starting the race at 1pm so that you can get the majority of the races in before the rains even start. How many races this year has the weather been just fine at 1pm, just to have the rains come in the afternoon when they insist on starting these races.

Apparently, even though Nascar has offices in the south, they still haven’t figured out it rains alot in the afternoons/evenings in most places in the summer/fall. Start the races earlier and you have better chance of getting them in on Sunday. It really is that simple.

Unless we are cutting races off the schedule, we don’t need to drag the season out any longer with off weeks during the playoffs.

Well DUH. Aren’t you just too smart for the rest of us Mr Common Sense.

Rain-proof the cars. Technically this is very difficult on closed-body cars with open windows, but it would allow NASCAR to race in most weather; heavy rain & lightning would still cause delays. Rain tires, windshield wipers and defoggers already exist. Perhaps more lights would be needed. Closing the windows probably would be needed for most ovals.
Rain is a great equalizer of teams. Fancy equipment and expensive aero advantages wash away. Driver ability takes the fore front. It would be very difficult, but it would be awesome!

NASCAR races back in the day almost always started at Noon, with few exceptions. i remember a few races that even started at 11 AM. The reason being that if the race was halted, they’d have a little extra sunlight to finish in the afternoon, if necessary. But, Brian France, in his infinite wisdom, did away with all of that. He wanted to compete with the NFL in prime time. NASCAR needs to go back to the future.