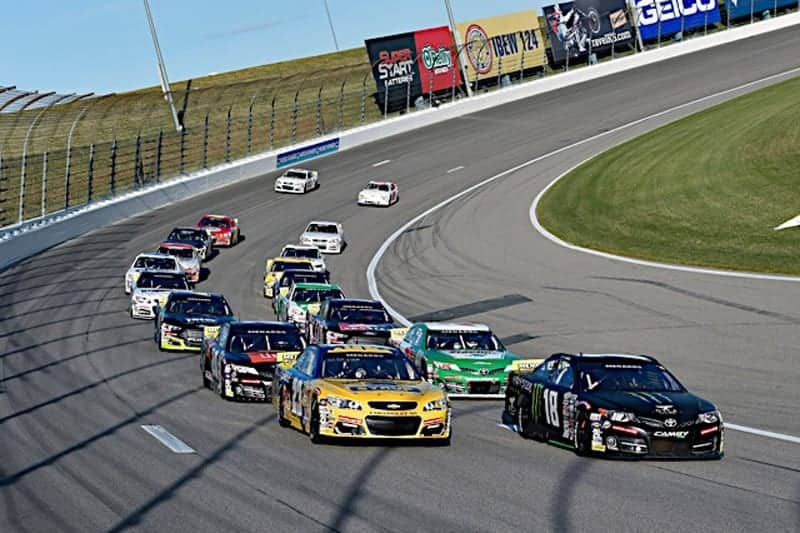 This year marked the first year the ARCA Menards Series was managed by NASCAR. In addition to that first, which included rebranding the NASCAR K&N Pro Series East and West into the ARCA Menards East Series and West series, ARCA dealt with the effects of the COVID-19 pandemic. ARCA President Ron Drager and his staff made changes to the series once it returned, which included running some races without fans, realigning races and establishing two competition cautions that had five-minute breaks.

ARCA successfully ran all 20 races of the main series, with Bret Holmes winning the championship. Meanwhile, Sam Mayer won both the East Series and ARCA Menards Series Sioux Chief Showdown, a 10-race championship within the main ARCA schedule, titles. One race remains in the West Series season, and Jesse Love is the points leader.

Following the season finale at Kansas Speedway, Frontstretch spoke to ARCA communications manager Charles Krall about the challenges of this season, how series officials are working to overcome the low car counts and detractors and what next season holds for ARCA.

Mark Kristl, Frontstretch: What letter grade would you give this ARCA season in its first year under NASCAR management?

Charles Krall: “A,” though I’m very biased (laughs), for all our challenges, merging rule books, updating schedules and getting to the race track. Honestly, I don’t think people understand how hard it was to get all 20 of those races in along with the East and West.

Kristl: What was your biggest accomplishment and challenge?

Krall: The biggest accomplishment was running all 20 races. The biggest challenge was getting the schedule realigned after the break. Just trying to figure where we could go, we had to move some dates around, to get those dates firmed up, and in many cases move some races elsewhere. That was such a huge task, and I’m glad we got it done. There were approximately 75 versions of the schedule. Some of them included racing all the way through Christmas. Thankfully, we didn’t have to do that, but there were so many contingencies. To run all those races without having to use those was a big sigh of relief, for sure.

Kristl: Are you anticipating COVID-19 restrictions to affect the schedule next season?

We hope not, but we are prepared if it is. We want to race with grandstands full of people. That’s important for us, our sponsors, our track operators and our promoters. We are definitely prepared for the first and second quarters of next year that these protocols may still be in place.

Kristl: Once ARCA returned from its hiatus, there were two competition cautions in every race, which consisted of five-minute breaks. Will those pre-set breaks be a fixture in ARCA in the future?

Krall: It’s possible. A big reason our fans come to the races is they like to see live pit stops. It’s the strategic calls that are made as part of that, which was lacking this year. Economically, we also understand that it’s not viable to fly in pit crews. We’d like to get to the point where we are back to that. But if we continue to operate under COVID-19 protocols next year, we will continue to see those competition breaks. Nothing has been decided on that for 2021. Budgetarily, it was a large saving for many of the race teams who compete in every race.

Kristl: Rookie of the Year Hailie Deegan and Showdown champ Sam Mayer are graduating to the main three NASCAR series in 2021. What does that say about ARCA as a driver development program?

Krall: It’s exactly what we’ve been saying about it for the past 30 years: this is the No. 1 series for young drivers to come launch their motorsports careers. Of the 99 drivers who competed in the season-opening races at Daytona International Speedway, at least 90 drivers have ARCA experience. About 50-plus have won ARCA races. So this is exactly what we are here to do. We’re here to be the bridge between weekly grassroots racing and starting your career as a professional racecar driver. While it was an informal part of driver development, now under NASCAR management, it is a formal part of that ladder.

Grant Enfinger is the perfect example of what ARCA is all about. Grant worked for years to break into big-league stock car racing. He worked extremely hard to scrape together full-time seasons in ARCA in 2013-15. Eventually, in 2015, he put it all together and won the ARCA championship. That launched him into a full-time NASCAR Gander RV & Outdoors Truck Series ride. That’s exactly what we are here for. Enfinger is the poster child for what ARCA is all about.

Kristl: Less than half of the races this year had less than 20 drivers competing in those. What are ARCA officials doing to bolster the field size?

Krall: The hallmark of our series is we work hard to keep costs in line. The engine programs now really allow these teams to own an affordable engine to maintain, and it has taken the high-dollar lease engines out of the equation. The Five Star body costs are a fraction of what they would have been. There are some other initiatives that I am not privy to talk about yet.

We are looking to add more chassis to the mix, ways to make readily available equipment eligible to compete. I don’t know that timeframe, but we are always working to make it attractive for prospective competitors to come race with us. Making more chassis eligible for the competition is definitely something we are looking at.

We are cognizant of the costs. We don’t want people spending millions of dollars to race in ARCA, because that return on investment doesn’t make any sense. The lower the costs, the more people will come race with us, which is what we constantly are trying to do.

Kristl: Who do you expect will become a breakout driver in ARCA next season?

Krall: Based on what we have seen this year, [Jesse] Love is one to keep an eye on. He’s done really well in the West series. He ran well in his few main ARCA series starts, too.

Gracie Trotter has done well this year on the West Coast, with a breakout season this year. I expect that to continue; I think we’ll see more of her.

As far as drivers in the East, I have been very impressed with Nick Sanchez. I hope he competes again next year. Another driver who ran well in family-owned equipment with a small budget was Justin Carroll. He ran wonderfully with what he had to work with.

It’s hard to speak about drivers in the main ARCA series, because that field is in flux. I hope we get to see Drew Dollar again next year. Drew had a pretty solid season this year; I think he could compete for the championship.

Taylor Gray has run well in all three ARCA series. He could achieve what Ty Gibbs did this year: reel off a bucket full of wins in a very limited ARCA schedule. He will turn 16 on March 25, so he will be eligible to compete for both the Showdown and East championships. As for the main ARCA series, he will not be eligible to run on anything bigger than World Wide Technology Raceway at Gateway. He can’t even run at Pocono Racewa,y because a driver must be 17.

Kristl: On the competitor portion of its site, ARCA lists the purses. Are series officials attempting to increase the purse next year?

Krall: That is beyond my purview. I am not included in those financial discussions to give an educated answer. I wish I was (laughs).

I know people are mocking us with how much it pays to win ARCA races. For most of the ARCA teams, such as GMS Racing, Joe Gibbs Racing, Venturini Motorsports, their budgets are not built around the race payouts. They’re here because it is a driver development platform, and that is where their customers want to be.

A late model race that pays $30,000 to win is there for that purpose: the purse. Our races are to give these drivers an opportunity to race on a superspeedway. It’s a different business model.

Kristl: What do you tell those detractors?

Krall: ARCA is not dying. We know we’ve had races with low car counts. We’re doing everything we can to rebuild that competitor base. Honestly, we want 40 cars at the track for every race. ARCA is not dying, though; no one is putting that kind of pressure on us, from NASCAR on down. It’s a tough time — the coronavirus situation, the economy, it truly is rough right now for a lot of people.

Eventually, it’s going to turn around. When that happens, we want to be a cost-effective platform to race, a series which will deliver exposure on live television, it’s going to get you the experience at a lot of different racetracks and send you on your way to become a professional racecar driver.

If all you have the budget to do is race here, we want to give you that place to race for a championship. We know we have work to do; we’re buckling down to get this series where we want it to be.

We’re still here and we’re putting on a race. If we decided not to race with low car counts, people would definitely think something is awry with ARCA. By completing this year, we’ve proven we’re here and we’re not going anywhere.

Kristl: What is something new fans can look forward to in 2021?

Our hope is we will be able to welcome fans back at the racetrack. Our goal is to deliver a cost-effective, reasonable at-track experience for our fans. Hopefully, that is the number one thing. We’re very proud of our short track races, we have on-track autograph sessions and our drivers are very accessible. We cannot wait to get back to that.