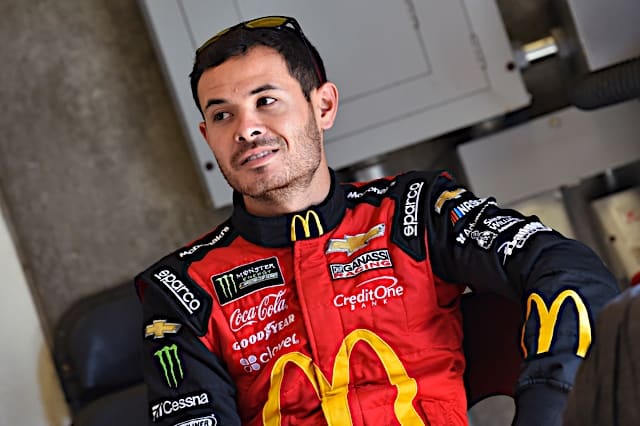 The announcement has been signed, sealed and delivered: Kyle Larson will drive for Hendrick Motorsports in 2021 in the NASCAR Cup Series.

In addition to the signing of Larson, the team will bring back the No. 5, a storied number for Hendrick Motorsports that last was on track in 2017 with Kasey Kahne. Crew chief Cliff Daniels, who currently sits atop the box for Jimmie Johnson, will be paired with Larson.

It was no secret in recent weeks that Hendrick was interested in Larson. When he was reinstated by NASCAR following a six-month suspension, all signs pointed to a spot at HMS.

No one, including Larson, saw what was coming in April for the 28-year-old. Before the season started, he was arguably the top prospect on many teams’ lists, including Hendrick’s. When Larson lost his sponsors and job after using a racial slur on an open iRacing channel, there was an uncertainty if he would return to NASCAR at all, let alone in 2021.

Now Larson will be with a championship organization and on a roster full of young talent. But will he live up to the hype and bright lights of Hendrick?

If Larson had never been suspended and still signed with Hendrick, there was going to be a microscope on him. Now that he has been given a second chance, it gets even closer.

Larson certainly has the talent to succeed. While his No. 42 ride at Chip Ganassi Racing was a good one, it was a tick off from being one of the top teams in the Cup Series. However, Larson was able to put it in victory lane six times, including four times in 2017. In 2019, he clinched a Round of 8 playoff berth with a win at Dover International Speedway.

Not only did this success put him on the radar, but so too did his accomplishments on dirt. Larson has won local, national and even global dirt races on a large scale. He won the coveted the Golden Driller at the Chili Bowl Nationals in January, an accomplishment that Larson strongly desired. When he was out of a job in NASCAR, Larson went above and beyond to prove his worth by winning 42 dirt races in 82 starts, including eight in a row at one point. Those performances, along with his effort to earn back his credibility, put him back on the radar.

There will be challenges next season. While he is a quick learner, Larson has not been in a Cup car since March, though he has experience with the current package. He is also on a new team with new expectations, new crew members and a new ride. His crew chief, Daniels, will also have to learn a new driver. Daniels was named Johnson’s crew chief mid-way through 2019, and the pair is still searching for its first win. Daniels will also be looking to earn his first playoff berth atop the box in 2021. Instead of making calls for a legendary veteran on his way out, he will be coaching a young driver with a whole different style.

While Hendrick has found plenty of gems in its past, the sting of what could have been has occurred multiple times. Tim Richmond came to HMS in 1986 and won nine races in two seasons, a superstar in the making. Unfortunately, Richmond became ill and passed away just as things looked bright. In 2004, the team called Brian Vickers to Cup after he won the 2003 Xfinity Series championship. Three seasons later, Vickers left the team for Red Bull Racing. Kyle Busch won four races and Rookie of the Year while at HMS but made the decision to pursue another opportunity at Joe Gibbs Racing in 2008. And while Kahne had his moments of success at HMS from 2012-2017, the expectation that Kahne would finally reach his potential and win a title never happened.

Hendrick has also struggled to have all four cars on the same page. Johnson has had issues the past three seasons and could be given the title of the fourth car at the team — unthinkable years ago, for sure. Kahne seemed to face it from 2015-2017. Casey Mears never could get on the same page as his teammates in 2007 and 2008. Even Busch faced some struggles in his time there. While Larson gets a lot out of his equipment, what will he do to avoid becoming the fourth car?

Larson certainly has the talent and makings to be a superstar in the No. The question is if external factors affect him and can he stay consistent enough to get to the pinnacle. Larson had success at CGR, but the inconsistencies to win or go deep in the playoffs plagued him at times.

Now Larson has a ride that can provide more leverage and ability to consistently win. He has the potential, talent and drive to make this move a long-term success. 2021 will be a great look to see how far the young star can go.

Please remove that file photo of Kyle Larson in a McDonald’s driving suit. We have no more relationship with that person.

Cream rises to the top. I believe Larson will do fine at HMS. The “fourth car” will probably be the #24.

None of the drivers at HMS have been setting the world on fire. I’d say the bar is set pretty low and Larson will be able to hold his own.

Exactly. Get a top 16 points finish and MAYBE win a race is something Larson should be able to clear pretty easily.

Unless HMS is expecting a miracle from the “new” car in 2022, that organization will continue to plateau as a mid-pack team as it has been for several years. The top teams now are Penske and SHR, with JGR slipping to 3rd, making HMS 4th. They won’t be any better with Larson. It’s actually pretty amazing that HMS has 2 drivers left in the Playoffs and they aren’t likely to make it to the Final 4. The HMS “glory days” are over and Rick seems to have bought a pig in a poke.

And even though Larson is not himself a racist, he has become the darling of racist fans, as a kind of anti-Bubba. I’m not sure that’s the image HMS wants.

What the hell do you know about who are racist fans or drivers? Your comment was pretty good until you came up with your last two sentences. I am tired of reading racial politics on a good NASCAR website. I want to read about racing when I am here, if you don’t mind.

I agree with your assessment of where each of the top teams are at this moment. And yes, the glory days are probably over unless they stumble onto the next Gordon or Johnson. The only thing I will point out is that none of the top four teams are ever so far out to lunch with respect to the others that the balance can’t change within a season or two. So write them off if you want but don’t be surprised when Chevy (and most likely HMS) is the one everyone is chasing. Nothing lasts forever. For instance look at SHR. You have them as the 2nd best team and maybe they are. But take away Harvick (who has to retire sometime) and how good do they look? My only point is that the pecking order isn’t going to stay the way it is now for long.

As for that last sentence, you keep selling that idea cheap but I don’t see anyone buying it. As for HMS worrying about their image, Dale Jr was the poster-boy for those types before he retired, even though he discouraged any such notion that he was one of them. I don’t think Jr or Larson are racists or would want any such fans to identify with them and, as long as that is the case, it’s business as usual at HMS. I still can’t see those racist fans identifying with Larson.

Bill B, you are probably correct in saying that I went too far in labeling Larson’s fans as racist. However, I do stand by the assertion that Larson appeals to many as the “anti-Bubba,” and among that group there probably are some racists. You are also right in saying that Dale Jr. appeals to the same fan base and that many of those fans would probably be shocked to know Junior’s political leanings.

How’s jojo feeling these days ! You don’t like Larson, you’ve never liked Joey and your pick every week is Harvick. Heads up for ya, if Brad is in the final, pick him or don’t you like him also.

That’s pretty funny. I’ve never been a Harvick fan, although I admit that he probably deserves a championship this season. I have two favorite drivers. One drives for HMS and one drives for JGR. Your crystal ball is looking pretty cloudy!

lol I know you

Hendrick admits he has no sponsor for Larson. He will probably drive the Hendrickcars.com car until that becomes a burden for selling cars to minorities. Once the cancel culture gets wind of his presence in a car sponsored by that company, all bets are off. Hendrick didn’t get rich being stupid. If no deep pockets come along, things could change.
Second chances, yes. An owner who plead guilty to bribery, yes. This culture, especially if Biden wins the Presidency, not too good.

The cancel culture is over-rated. Their only tools are bullying and boycotting, neither of which is an effective strategy because they usually fizzle out in a relatively short period of time. Quite often they backfire… ask Goya Foods. I’m not the least bit concerned about the cancel culture when it comes to Nascar. Nor am I worried about funding for the #5 team. Rick Hendrick may be a lot of things, but he ain’t stupid.

No one really knows how well Larson will perform at HMS…this whole article is about speculation. All we know for sure is that expectations are fairly high; results are TBD. Stay tuned.

While that may be true, now it doesn’t mean that won’t change prior to Daytona 2021. Hendrick is a salesman with lots of friends. I wouldn’t be surprised to see sponsorship gained prior to February.

NO! I do not see this “curdled cream” rising to the top of anything!

With one win, cancel culture can be canceled. Larson knows how to win at the Cup level. Bubba doesn’t. Give the nod to Larson…

It’s interesting that the”holier-than-thou” media never seemed to be bothered by the rappers using racist language, but want to crucify others. I’m on the Larson and #5 bandwagon!!!