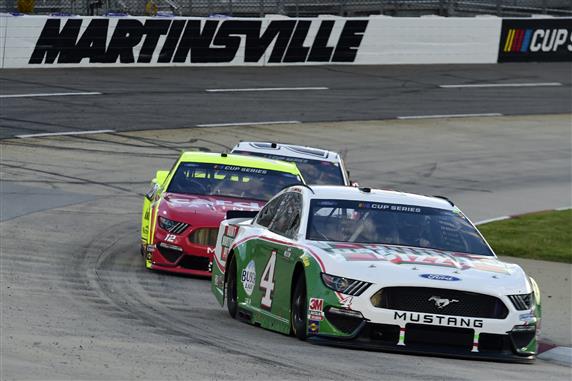 The fall winner NASCAR Cup Series winner at Martinsville Speedway has clinched a Championship 4 spot five years in a row. Will someone make it six? Who?

Luken Glover: Yes — Chase Elliott. If you look at the drivers who haven’t won at Martinsville that are due for a win, Elliott has a strong argument. Flash back to the infamous finish to 2017: Elliott leads in the closing laps when Denny Hamlin sends him spinning. In 2018, Elliott finished ninth and seventh. In 2019, he led 49 laps in the spring race but finished second to an absolutely dominant Brad Keselowski. His bad luck in last year’s Round of 8 started at the Paperclip when he blew an engine in practice, forcing him to start at the rear. He blazed his way into the top 10 before he had another motor issue that ruined his day. At the spring race in June, he finished fifth. Crew chief Alan Gustafson has a lot of faith in his driver, and Hendrick Motorsports is bringing strong cars to the track. If everything goes right, Elliott could finally win at the track and break his streak of Round of 8 dismissals.

Clayton Caldwell: Keselowski is the favorite this week. That team’s 750-horsepower package has been tremendous, and he’s good at Martinsville. Top that with him starting the race with the best track position possible, and it could be a long day for the rest of the field.

Amy Henderson: It’s hard to look past Martin Truex Jr. Truex has struggled without practice this year and is in a points hole.  He has to win. But guess who’s won the last two races at Martinsville: Truex. The other drivers not currently in the top four haven’t been all that good at the paperclip, but Truex has become a threat every time out. He could oust one of the current favorites for sure.

With everything on the line this weekend in all three national series, do you think the races will be chaotic affairs, or will drivers try to avoid making enemies for the finale?

Henderson: If history bears out, they’ll be fairly tame. We’ve seen a few fireworks at Martinsville in the fall: Matt Kenseth and Joey Logano, Logano and Truex, Denny Hamlin and Elliott. But most of the non-playoff drivers seem to avoid the contenders like the plague and the playoff drivers don’t really take chances either. The four drivers outside the top four are the most likely to make noise.

That said, the Xfinity race could be a bit of an outlier, not because of playoff implications, but because there are exactly two drivers on the entry list with Xfinity experience at the track. Some have raced there in the Cup or Truck Series, but not in their current rides and others not in years. It’s a tough track, and it’ll make the winners work for it for sure.

Caldwell: The races will be chaotic in different ways. In the Gander RV & Outdoors Truck Series, pretty much everyone seems mad at each other for what happened at Texas Motor Speedway. In the Xfinity Series, most of the field has very little experience at Martinsville, which should make for an interesting event without any practice. For the Cup race, well, this event has always had some controversy tied into it. Being the final race of the Round of 8 shouldn’t change that.

Glover: We will see a mix of both. The first stage and a half will likely be good, clean short-track racing. After that, hold onto your hats. As the day turns into night, drivers’ aggression levels will pick up and desperate playoff drivers will not hesitate to move anyone. The short-track package this season has created some good racing, and that should carry into Sunday.

Which recently announced driver and team will get to Cup victory lane first: Bubba Wallace in the No. 23 or Kyle Larson in the No. 5?

Glover: Kyle Larson. Larson has the knowledge of how to get to victory lane in a Cup car and will have better equipment to go with it. While Larson’s equipment while he was at Chip Ganassi Racing was not as strong, there were times when he could consistently outrun the HMS cars. Now that the Hendrick team is beginning to find its footing and pick up speed, Larson should be able to get a win or more in the next season or two. 23XI Racing will likely become competitive, but as with all new teams it will take time to get up to par.

Henderson: Larson. Wallace has shown major improvement, but he still lacks experience racing up front for wins in a Cup car, and that generally has to come first. In good equipment, he could have a season similar to what we saw from Matt DiBenedetto this year. But Larson has that experience already, and he has a lot to prove. While Larson still needs to show that he can close races on a consistent basis, he’s getting the tools to do that at Hendrick–an established team. Any new team, no matter how well-funded, is going to have some growing pains, and 23XI principal owner Michael Jordan doesn’t have NASCAR experience. Hamlin does, of course but he’ll be busy trying to win a title in his own car. Expecting the team to win in its first year is unrealistic.

Caldwell: Larson, hands down. First, he’s going to a very established and polished organization. Plus, he’s won in this series before — six times, in fact. I’ll be stunned if Larson doesn’t get to victory lane at least once in 2021. 23XI could have some growing pains getting established to the Cup Series in year one.

Brandon Jones is running the Truck race at Martinsville. Should full-time Xfinity drivers be allowed to participate in Truck playoff events?

Caldwell: It’s wrong, especially since there was such a big fuss made about DGM Racing and Alex Labbe testing at the Daytona International Speedway road course a few months ago. Brandon Jones is in the playoffs and now will have 200 more laps on the track than his fellow competitors. I know his dad helps spends a lot of money in the sport and NASCAR may be afraid to ruffle some feathers there, but it seems a little ridiculous to allow that during this part of the season in this type of season.

Henderson: No. I’d like to see one uniform rule: drivers cannot run playoff races in any series other than the one they have declared as their points-paying series. That lends consistency across the board and gives no driver an advantage of extra track time. What if Jones–an Xfinity playoff driver–were to have a tire go down, lose his engine, or simply make a mistake in the Truck race and cost a driver a spot in the title race? Sure it could happen with another Truck driver as well, but that seems more fair than a driver from another series.

Glover: There is no problem with it in the regular season, but no to playoff races, especially a cutoff race to decide the Championship 4. It isn’t a huge issue, but if Jones were to affect or ruin a playoff driver’s chance of making it to the Phoenix Raceway finale, there would be a problem. While it is an opportunity for Jones to gain more experience at Martinsville before the Xfinity Series makes its return to the track, it will certainly present more of a challenge for playoff competitors if he finds his groove.

The Frontstretch Staff is made up of a group of talented men and women spread out all over the United States and Canada. Residing in 15 states throughout the country, plus Ontario, and widely ranging in age, the staff showcases a wide variety of diverse opinions that will keep you coming back for more week in and week out.
@Frontstretch
Previous William Byron’s Pit Crew Sidelined Due to COVID-19
Next 4 Burning Questions: What Is the State of NASCAR?