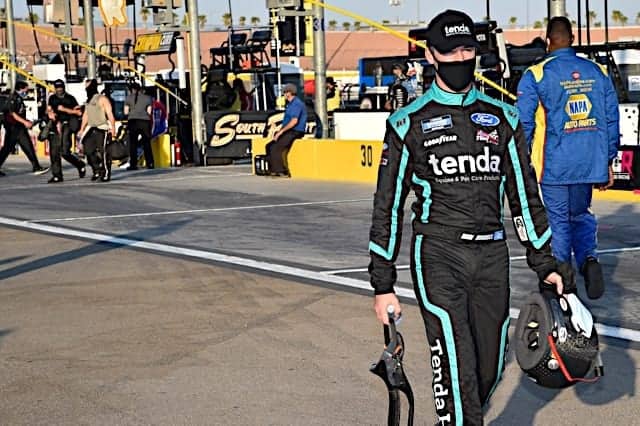 Though the NASCAR Cup Series just finished its race at Texas Motor Speedway Wednesday afternoon, the penalty report for the Gander RV & Outdoors Truck Series has already been released. And while Chandler Smith received a penalty (rightfully so) after one of his wheels came off as he was leaving pit road, the sanctioning body failed to take any action against Ben Rhodes for his blatant wrecking of Christian Eckes last weekend.

In case you missed it last Sunday, Eckes and Rhodes were battling for third behind leaders Sheldon Creed and Austin Hill, who were embroiled in their own fight for the win. With just two laps remaining, contact from Rhodes sent Eckes hard into the outside wall, down the track and onto the infield grass where his truck came to a rest.

Ben Rhodes hooks Christian Eckes and sends him into the wall.

Eckes gingerly climbed from his truck, clearly sore from the heavy impact with the wall but still had enough in him to share his displeasure with Rhodes.

“That was a pretty big hit, and I’m okay. Just ready to get to Martinsville,” Eckes said after the race. “It started with just hard racing, and we’ve had this problem before. I’ve raced [Rhodes] hard, but I race everybody hard, and that’s what I’m here to do.

“We had a little bit of an incident at Las Vegas, and all day today, he didn’t really give me much room. Every time we would race side-by-side, if you backed it up to the turn 3 entry even, he was laying on my quarter panel, which caused me to go up the race track.

“Sure, I was being aggressive and trying to clear him, but in the same aspect, it’s just hard racing on a one-groove race track. Then he got a little upset and we got straight down the straightaway and I was separated and had a run. Was going to probably clear him, and he just turned left as hard as he could and hooked me.

“You could see that he turned left with the way the truck reacted after he turned me. Unfortunately, it’s just the nature of the business.”

Rhodes denied any wrongdoing immediately over his team’s radio and reiterated that in an interview with FOX Sports after the checkered flag flew.

“It’s two times the guy runs me out of the groove,” Rhodes said of Eckes after the race. “I almost knocked down the turn 4 wall, completely on the gas, hand over fist, and I’m trying to catch it. So I’m trying to gather it up, we get into him, which is unfortunate.”

Excuse me? First of all, there was no contact between Eckes and Rhodes when Rhodes slid up toward the wall but didn’t even hit it. Second, you’re not going to convince me that a driver turning straight left and hooking another competitor in the right rear quarter panel was an accident because he couldn’t control his truck. If that No. 99 was really THAT out of control, the better response would’ve been to let off the throttle, collect the truck and buckle down to fight back.

But for just a moment, let’s consider that maybe it truly was a mistake.

That’s what happens? Talk about an admission of guilt. I understand that Rhodes was frustrated, especially since he needs a win to keep his championship hopes alive. But what I don’t get is how NASCAR could have possibly looked at the same video and come to the conclusion that no penalty was necessary, especially with that type of radio chatter.

We saw Johnny Sauter get suspended for retaliation against Austin Hill last season, though his move was made under caution and was quite a bit more blatant than Rhodes’ was.

But what about if we were to go further back and look at when Kyle Busch intentionally dumped Ron Hornaday? Busch was parked for the remainder of that race and suspended for the rest of the weekend at Texas Motor Speedway. So not only did he face a consequence in the Truck Series, he also had to face it in the Xfinity and Cup series as well.

“Intentionally wrecking another vehicle, whether or not that vehicle is removed from competition as a result,” is listed in the 2020 NASCAR Rule Book as a reason for a driver to suffer a point and/or monetary fine and/or a one-race suspension, indefinite suspension or termination. Obviously, a driver’s history is going to be a factor when it comes to the gravity of the punishment, but to just brush that incident off as a racing deal and assess no penalty whatsoever is the wrong call.

What is perhaps more concerning is that if the roles were reversed, it’s almost guaranteed that some sort of penalty would have been assessed. After all, Rhodes is a playoff driver and has a lot more to lose than Eckes when it comes to the standings. But if that’s the reason NASCAR opted not to suspend Rhodes, that’s even more outrageous.

With all of that said, that doesn’t even take into account the potential for injury. Clearly Eckes was sore when he emerged from his wrecked truck, but thankfully he did walk away under his own power. It could have easily been a worse result, but safety innovations have come a long way in this sport.

All things aside…. thankful for my @KBMteam for building me safe @safelite Tundra’s. Pretty sore but could have been a lot worse. Ready to get to Marty’s next week!

Plain and simple, Rhodes should not be behind the wheel of the No. 99 this week. Instead, he should be sitting at home with the reminder that using a race car as a weapon is simply dangerous, especially at a track where lap times tend to eclipse 170+ mph.

NASCAR should have sent a strong message but failed to do so, which of course invites payback at Martinsville Speedway this weekend.

Eckes finds himself between a rock and a hard place when it comes to payback, though. There’s no doubt he wants to make sure Rhodes knows he’s unhappy, but should Eckes so anything to Rhodes that looks even the slightest bit intentional, you can bet NASCAR will drop the hammer quickly. After all, that would be considered “premeditatedly removing another competitor from championship contention,” something that we’ve seen previously in Cup.

Interestingly enough, after his victory at Texas, Kyle Busch didn’t encourage his drivers (publicly, at least) to issue payback this weekend at Martinsville but instead offered a suggestion for Rhodes to use the situation as a chance to make a difference.

“They’re all kids, man. They all come up in late models and K&N and door banging and beating the hell out of each other every series they run in, so they might as well keep doing it in trucks,” Busch said when asked if he’d spoken with his drivers about how he wants them to race next weekend. “That’s what’s going on right now. Rhodes is just as guilty as they are in his earlier years, no question. He has certainly mellowed out and has done a better job as of late, so he if wants to help be a mentor to some of those kids that are just coming in for their first year, I would take that approach.

It remains to be seen what will actually happen this weekend at Martinsville, and it could turn out to be nothing at all. But we all know there’s one driver who’s racing this weekend but should be sitting at home instead.

Kyle the voice of reason? Perhaps he is growing up – but that was post-win Kyle, which is very different from every day Kyle.. But in terms of the situation – make no mistake, both NASCAR and their TV overlords want this – driver safety be damned.

Nobody deserved or deserves what Hornaday got and had Kyle Busch not been a t-shirt selling media maker, he would’ve been toast after that move. Should have been anyway, in my opinion. And anyone who would wish a hit like that on someone needs help.