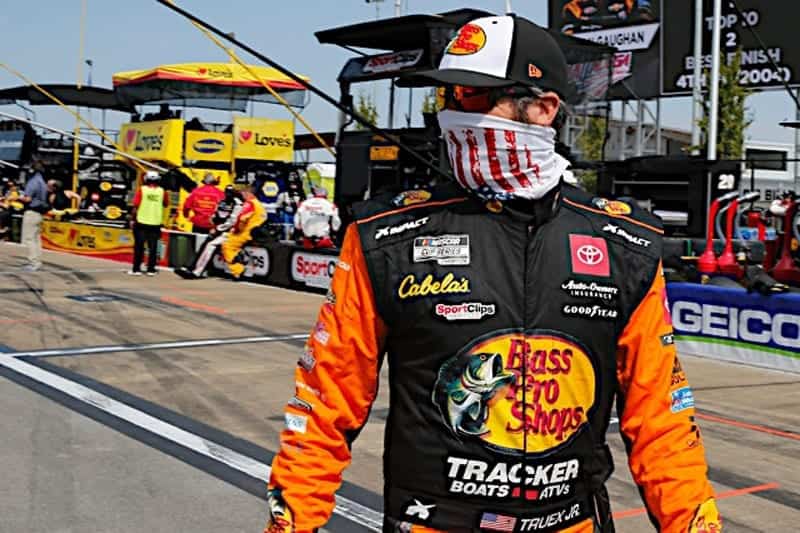 The fall race at Martinsville Speedway is the oldest race in NASCAR, having been first contested in the Cup Series’ first season in 1949.

In the last 71 years, many great drivers have found victory at “the Paperclip”. In fact, only eight series champions, representing only 10 of those 71 championship seasons, have failed to win at Martinsville at some point in their career. The only one of the eight that is still active is Matt Kenseth; I’ll leave the comments section to figure out the other seven on their own.

This is the final race for seven of the eight remaining playoff drivers to stamp their name into the championship four. There doesn’t seem to be much of a chance for a big points battle, with a 25 point difference between fourth and fifth on the playoff grid. With four drivers all but going exclusively for a win, it might be smart to hedge against those in must-win scenarios and focus more on consistency. That being said, there is one win-or-out driver that should be a very attractive pick for any fantasy team …

The 2017 Cup Series champion spent 13 years in the series before getting his first short track victory at Richmond last season. Ever since that breakthrough victory, Truex has won three more short track races for a total of four wins in the last 10 races on the discipline.

Two of those wins happened to come out of the last two races at Martinsville. While Truex will be looking for a third straight at the Paperclip this weekend, his main priority will be to get into the championship four. There’s simply not a lot of avenues for Truex to get in without winning, which isn’t common for this iteration of the No. 19 team; while they’ve been pretty consistent this year since Cole Pearn retired from atop the pit box, they just don’t have the raw speed Pearn could get out of these TRD engines. Still, that didn’t stop Truex from winning at Martinsville in June, and it might not stop him from winning on Sunday.

Keselowski has taken to Martinsville like a fish to water. In 2019, Keselowski led 446 laps on his way to victory, which has to be an all-time record for the daily fantasy era when it comes to points in a single day. While it’s unlikely that Keselowski is going to go out there and lead 400 some laps again, there’s a lot of evidence outside of that race that points to a good result for Keselowski regardless.

For a track where so much is taken out of the driver’s hands, the No. 2 Ford has been remarkably consistent. Keselowski is riding a streak of nine straight top-10 finishes at Martinsville entering this weekend, with a whopping eight of those races ending in top-five finishes.

There’s also a little bit of personal pride on the line here. Look, it’s been eight years since Keselowski won his only championship. Since then, he’s personally recruited Joey Logano, who has gone on to equal and perhaps even eclipse Keselowski in a few ways. While the two are friends, it’s hard to imagine Keselowski would just laugh if he doesn’t advance and root for Logano to get another championship. No, Keselowski wants to advance, win this championship, and remind everybody who’s the leader of Team Penske.

Johnson continues his full-time retirement tour heading into Martinsville, the site of nine Johnson triumphs. Four of those wins came in the fall as Johnson was en route to one of his seven championships, with two other of those wins coming in playoff races where Johnson ended up being this close to a championship (2004 and 2012).

Johnson probably isn’t going to get win No. 10 this weekend, especially with teammates Alex Bowman and Chase Elliott being the focus for Hendrick Motorsports this weekend as they chase their own championship. But for this price, Johnson is a solid pick who should be able to stay out of trouble and maybe walk away with a top-10 finish, like he did in the June race here.

Bell really didn’t impress much at Martinsville in his lone start there, but that was the summary of the first half of Bell’s season. While Bell’s record doesn’t really show it, the No. 95 has had speed. They’ve struggled to finish races or have much consistency, but they’ve definitely had speed at times.

It’s clear that of all of the rookies in the field this season, Bell has been the most improved. A 10th-place finish at Kansas Speedway a couple of weeks ago was followed up with a career best third last week. Bubba Wallace is an attractive pick near this price range due to his spirited run at Martinsville in the June race, but the hot hand usually has the edge over prior experience.

Preece doesn’t have a great record at Martinsville, but his 2019 starts at the paperclip ended in solid top-20 finishes. Preece should be able to match that, especially with how well he’s been in the playoffs. Martinsville should play right into Preece’s wheelhouse; the former modified series champion came up racing on flat ovals in the northeast similar to this one.

Fanning the flames and stoking the fire. Typical BS from the lame stream “reporters”