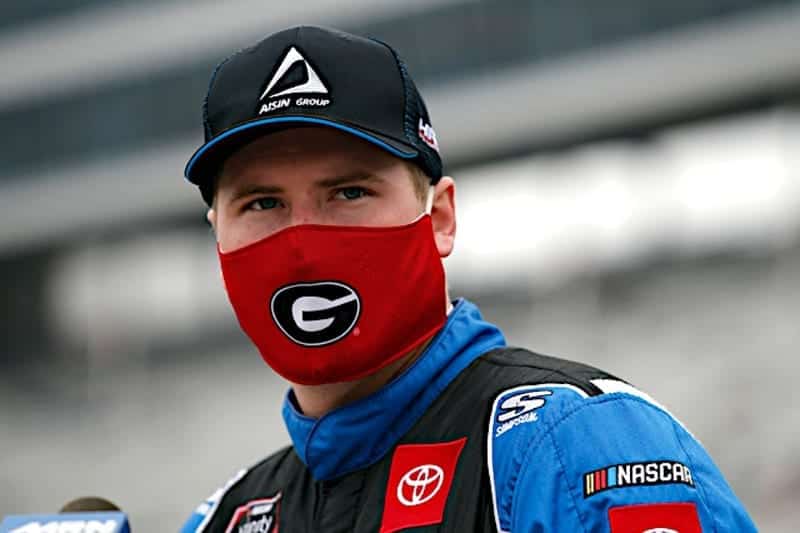 The regular season NASCAR Gander RV & Outdoors Truck Series champion won’t be vying for a title at Phoenix next weekend.

Friday, Oct. 30 was a whirlwind of emotions for Austin Hill. Before the NASCAR Gander RV & Outdoors Truck Series Round of 8 finale at Martinsville Speedway, it was announced he would return full-time with Hattori Racing Enterprises Truck Series next year with part-time competition in the NASCAR Xfinity Series.

The 26-year-old started the race with a 27-point cushion above the Round of 8 cut line. Moreover, Hill started the NASCAR Hall of Fame 200 in third place, but he soon began developing issues with his No. 16.

During the lap 48 caution, Hill told his team, “I have no rear grip… feels like a LR (left rear) is going down or something.”

Early in the third stage on lap 117, the engine blew, confirming what the team already knew: It was only a matter of time.

“We don’t know 100% sure what happened but it blew up on us,” Hill told FOX Sports 1 after climbing from his No. 16, upset with his premature exit. “We had a tire going, lost some track position, got into the lucky dog. Then it started losing power, cutting in and out. Really great built Ilmor engines don’t like to breathe fire.

“It’s just frustrating to potentially end your season on an engine failure like that. Everyone that makes this deal happen deserves a lot better. We should be in this final four. We got a lot of racing to go, I don’t know what the points look like. I guess anything can happen and we had a little cushion. It’s frustrating; I cannot put into words what I’m feeling right now.”

"I can't even put into words what I'm feeling right now."

Barring a miraculous scenario, @_AustinHill will see his championship hunt come to an end. pic.twitter.com/YW8XQX0UWc

Hill was credited with 35th place, barring any post-race inspection issues. After winning the Truck Series regular season title on the strength of two wins this year, Hill’s championship hopes ended in Martinsville. He ultimately missed the Championship 4 by 21 points.