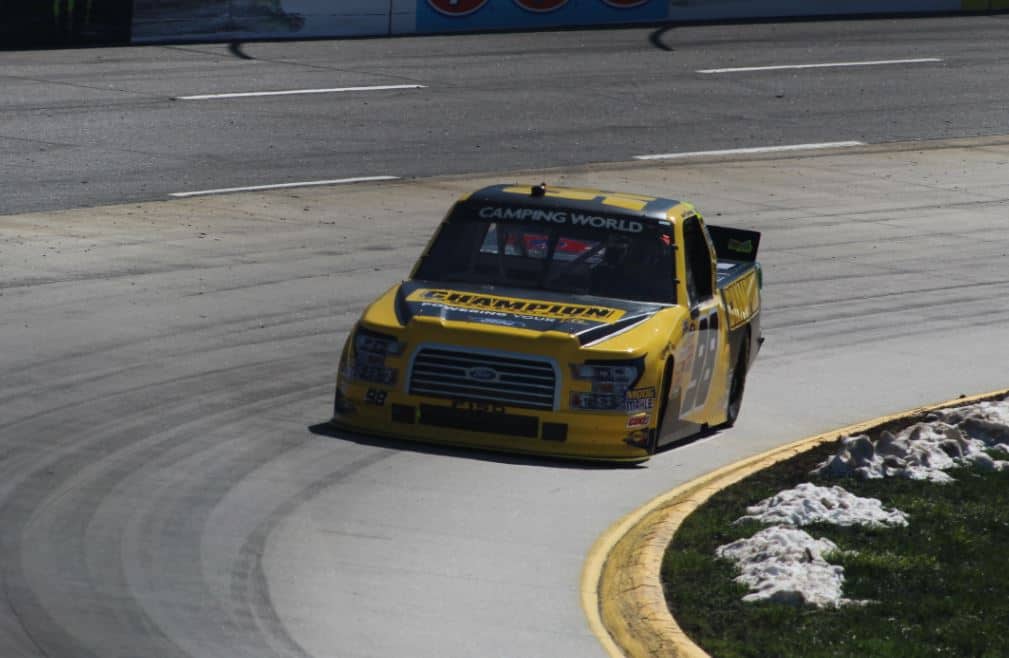 It was a nearly full-moon Friday night for the first-ever NASCAR Gander RV & Outdoors Truck Series night race at Martinsville Speedway, and the action did not disappoint.

With crashes, problems, and tempers wreaking havoc throughout the night, Enfinger kept the nose of his No. 98 Ford clean to grab the holeshot on a final two-lap sprint to the finish. The result was even sweeter for ThorSport Racing as it scored a one-two finish with Enfinger’s teammate Ben Rhodes finishing second.

“It was tough,” an exhausted but jubilant Enfinger told Fox Sports 1. “We knew this one was [a race] we would have to take the gloves off and fight for but we had a just good enough Champion Power Equipment Ford F-150 to get it done. It’s been an up and down season for us but we’ve tended to have peaked when we have needed to.”

The win held even more significance for Enfinger as he earned a coveted spot in the championship four for next weekend’s season finale at Phoenix Raceway.

The problems were dramatic and frequent throughout the night, beginning with a bizarre lap 13 dust-up which turned the frontstretch into a parking lot. Tanner Gray, Trevor Bayne, Tate Fogleman and Ray Ciccarelli were among those involved.

We … haven't exactly seen this before ?.

Follow live scoring as we sort this out: https://t.co/g7Y6GfZVw6 pic.twitter.com/XxSaJCEkPZ

It was not a good night for Gray, as he would be involved in two more incidents throughout the night. Fogleman’s night would come to an end after a collision involving Carson Hocevar just after the final stage went green.

While many playoff drivers avoided the early wrecks, the same could not be said for mechanical gremlins, the biggest of which belong to Austin Hill‘s Toyota. Hill, who many considered to be one of the favorites to win the 2020 championship, fought major engine issues all night.

On the same day in which he announced he would return to the series next season, Hill’s suffered through a disaster as his No. 16 Hattori Racing Enterprises entry ran sour all night before finally dying under a lap 117 caution period. Because of his 35th-place finish, a heartbroken Hill was stunningly denied a spot in the championship four after previously winning the regular-season championship.

Although he is already locked into the season finale, Sheldon Creed led early but was forced to pit under green with a flat tire. Despite losing a lap, Creed scratched and clawed back into the top spot.

But it lasted just one straightaway, as Enfinger sent him for a late spin that took him out of winning contention.

Creed’s teammate Brett Moffitt, who is also locked into the championship four, had his night end with nine laps to go after triggering a crash with Rhodes and Raphael Lessard.

.@raphael_lessard gets spun in front of the entire field!@Brett_Moffitt had nowhere to go and gets caught up ?. pic.twitter.com/Owi74XjdUm

Todd Gilliland, an eliminated playoff driver, fought overheating and electrical issues. The 20-year-old and defending Martinsville winner even needed a push from a tow vehicle after the No. 38 stalled under caution. Gilliland finished 32nd.

After the dust settled, Zane Smith‘s third-place finish solidified his points cushion well enough to claim the final spot in the championship four alongside Moffitt, Creed, and Enfinger.

Christian Eckes and Matt Crafton rounded out the top five finishing positions. Crafton, Hill, Rhodes, and Tyler Ankrum were the four drivers eliminated from the playoffs following the contest.

A champion will be crowned after the season finale at Phoenix Raceway. The Lucas Oil 150 is set for Friday, Nov. 6 at 8:00 p.m. ET with TV coverage provided by FOX Sports 1.

The number of caution laps in these truck races are needless and ridiculous! It would have been nice to have more racing in a race that determines who goes to the championship round.