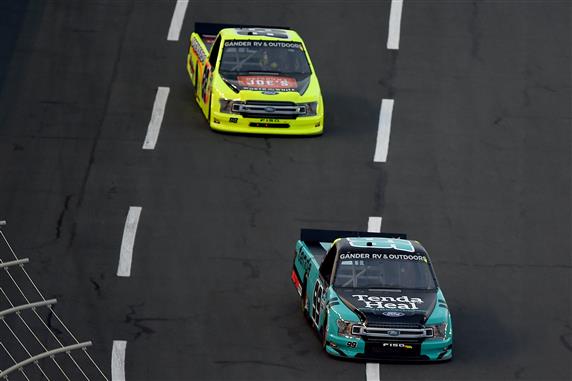 A second and fifth place run wasn’t enough for the ThorSport Racing duo of Ben Rhodes and Matt Crafton to advance to the Championship 4.

Their teammate’s victory saw Rhodes and Crafton fall short of advancing to contend for a title in Phoenix, while Grant Enfinger‘s fourth checkered flag of the year vaulted him into title contention.

Rhodes restarted with two laps to go on the outside of the front row, with Crafton a distant sixth. As the field worked its way into turn 3 coming to the white flag, Rhodes received a shove from Christian Eckes, who was wrecked by the No. 99 last weekend, forcing him to fall behind Enfinger and see his shot at the win go out the window.

HE WILL RACE FOR A CHAMPIONSHIP. Retweet to congratulate @GrantEnfinger on his WIN at Martinsville!

“A lot of controversy. I don’t want it, but it’s racing I guess,” Rhodes told FS1 post-race. “You’ll have that with the playoffs and short tracks. Every position, every point, every spot matters and I’m not about to give it away.”

Rhodes also made contact with Raphael Lessard on a prior restart, and sought out the No. 4 team to apologize for his mistake. However, pre-race, Rhodes said he received criticism he felt unjust for the controversies he was involved in last week at Texas.

A dejected @benrhodes comes up one spot short of championship eligibility.

"I really wasn't worried about it," he said of his rivalries from Texas carrying over. "The biggest thing that upset me was the insults that I got walking up and down pit road today & going to my truck." pic.twitter.com/qhiPciDAYN

Crafton, who led six laps on the evening, was critical of NASCAR’s slow clean-ups throughout the evening. 82 of the total 200 laps were run under caution, translating to roughly 41 percent of the race.

“That was pathetic. We rode under caution for the double we should’ve,” he told FS1 post-race.

"That there at the end of the race was absolutely pathetic. … Someone spins out and it takes us at least 10 laps to get going." @Matt_Crafton

Sheldon Creed, Brett Moffitt, Zane Smith and Enfinger will battle for the title next weekend at Phoenix Raceway (Friday, November 6 at 8 p.m. ET).