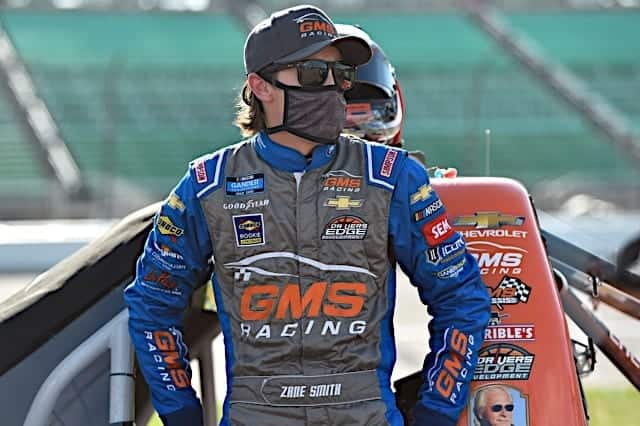 Zane Smith entered the final race of the NASCAR Gander RV & Outdoors Truck Series Round of 8 with a precarious 12-point cushion as the last driver above the cut line. After the NASCAR Hall of Fame 200 at Martinsville Speedway, he advanced to the Championship 4 as the lone driver to make it via the points standings.

Smith started the race in second place but led the opening 11 laps. When the first stage ended, he was in fourth place, gaining seven valuable stage points. He then failed to score any points in the second stage, leaving him in a tight points battle with Matt Crafton.

When the checkered flag flew, Grant Enfinger was the race winner, leaving only one available Championship 4 berth for drivers via the points standings. Smith finished third, two spots ahead of reigning Truck Series champion Crafton.

Crafton finished fifth and first in the first two stages, respectively, accruing 16 points. However, he trailed Smith in the wins category, two to one.

“My first trip to Martinsville; everything I expected plus more,” Smith told FOX Sports 1 post-race. “I, unfortunately, had to play it safe all night. I really wanted to join the fun there, especially when the No. 13 (Johnny Sauter) punted me out of the way. I wanted to get him back pretty bad but I maintained my cool and my team never gave up. That’s the story of our year. These guys deserve a championship. I can’t wait to get to Phoenix, it’s such a good racetrack for me. Awesome night.”

Smith joins GMS Racing teammates Sheldon Creed and Brett Moffitt, who both clinched their berths via wins in the Round of 8, as three of the four drivers in the Championship 4.

The 21-year-old Smith is only a rookie in the Truck Series, but he has been reflective of his success thus far this year.

“That’s just things that build up throughout the year,” Smith told media members in a post-race Zoom call. “That’s what a lot of my emotion came from, at Michigan. It’s embarrassing for me to do that on TV but it’s real at that point. I can’t wait. I know at the final four I get to have guests and family at Phoenix. So for my family to see me compete for a championship will very special.”

In his three starts there, he has two top fives and two top 10s. He finished fifth there in his Xfinity Series start last year. In the inaugural ARCA race there this year, Smith led nine laps en route to a fifth-place finish.

So, this new points system is supposed to be easier to keep track of than the old Latford system, right? boy, have they failed miserable.

If that was the only thing they failed miserably at, they wouldn’t be where they are now. It would have been easy to fix. Go back to it. By now they have too many miserable failures. Thanks, Brian, and the toadies who kept his legacy going.

Nascar did a sorry job of restarting the race after the last two cautions. Its almost like they did it on purpose. It may have caused Crafton a shot at the final four.