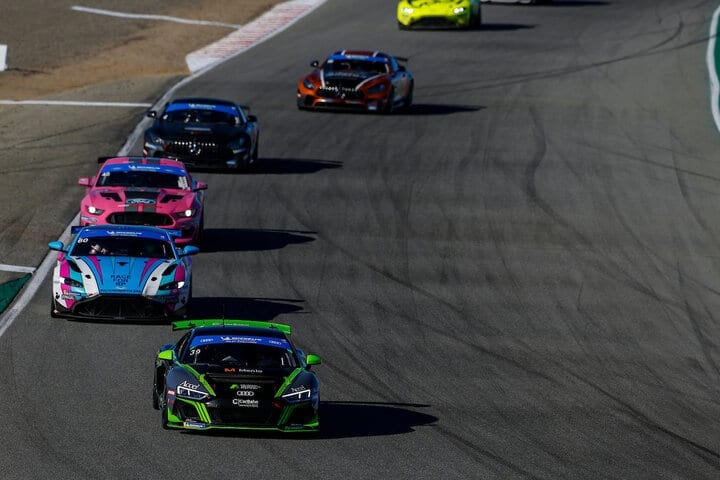 After the drive-time error at Michelin Raceway Laguna Seca, Tyler McQuarrie stated in an interview on NBCSN that he and teammate Jeff Westphal needed to win the last two races of the year to have any chance to successfully defend the Michelin Pilot Challenge championship. So far, so good.

Westphal was able to get an excellent run off of turn 11 coming to the white flag. Westphal used that momentum to get past Archangel Motorsports’ Trent Hindman in the Andretti Hairpin. From there, Westphal was able to hold on to take his and McQuarrie’s second win of the season.

“To be honest, I needed [Trent Hindman] to make a mistake,” Westphal told NBC Sports’ Kevin Lee in victory lane. “He was having a phenomenal stint ever since he left the pit lane.To be fair, I didn’t have a lot for him. In the last [few laps], I could tell that he was struggling with his rear tires. [Hindman] went wide in turn 11 and I thought this was my only chance. I squared up, got the rear tires to hook up, got in a drag race on the straight… and beat him to [turn 2].”

McQuarrie started from the pole and seemed to have the best car early.  However, much like the FOX Factory 120 a couple of weeks ago, it was a start-and-stop affair early on.

Exiting the Andretti Hairpin on the first lap, Multimatic Motorsports’ Hailie Deegan got in the back of Motorsports In Action’s Sheena Monk. While Monk did not spin out, this caused a series of check-ups. Further back, BGB Motorsports’ Thomas Collingwood collided with the TCR Hyundais of Bryan Herta Autosport’s Ryan Norman and Harry Gottsacker, resulting in a four-car crash that also collected Mason Filippi to bring out the yellow.

Flippi’s car was out on the spot as he was unable to drive it back to the paddock. Gottsacker was able to get back to the pits, but his right-rear suspension was bent. After 34 laps behind the wall, Gottsacker and Mark Wilkins returned to finish seventh in class. Collingwood and Norman were able to continue without issue.

A series of casual bouts of contact resulted in the 2.238-mile road course being littered with debris. That eventually caused a second full-course caution in order to rid the track of large pieces of bodywork.

Much of that bodywork seemed to come off of the Rebel Rock Racing No. 71 Chevrolet driven by Frank DePew, who had been jostled around quite a bit early on. A couple of laps after the second restart, DePew was hit in turn 11 by Roadshagger Racing’s Gavin Ernstone and spun. A secondary hit littered the track with debris and brought out another yellow. DePew was able to stagger back to the pits, but retired shortly afterwards.

The caution resulted in a split pit strategy for the rest of the race. Most of the leaders chose to stay out, but others waited for the 40-minute mark and stopped during the yellow. Monk was in the second group, stopping in order to put Corey Lewis in the car.

The three yellows early on took up 16 of the first 23 laps, allowing everyone to save a substantial amount of fuel. Two weeks ago, CarBahn Motorsports with Peregrine Racing couldn’t go much more than 43 minutes on a tank of fuel. That was one of the root causes of their strategy.

With the yellows and much slower speeds, they were able to go nearly 70 minutes on their original tank of fuel Saturday. McQuarrie pitted the No. 39 Audi R8 LMS GT4 with a little more than 50 minutes to go for their one and only pit stop. KohR Motorsports had already stopped their Aston Martin two laps earlier and were borderline on being able to make it to the finish without a yellow.

In the pit sequence, Kyle Marcelli in the KohR Motorsports Aston Martin was able to jump Westphal. Archangel Motorsports’ Aston Martin with Trent Hindman at the wheel went an extra lap on fuel and got out in front of Westphal as well. Meanwhile, Lewis ended up in the lead on his alternate strategy and was 18 seconds ahead up the road. However, he had to pit again.

Marcelli took the lead when Lewis made his final stop, but it was right about here that Hindman made his charge. Coming into turn 11, Hindman dove to the inside of Marcelli and took the lead away. Westphal followed into second. Marcelli, forced to save fuel in order to make it to end, fell away from the leaders.

Westphal was every bit the equal of Hindman, but simply couldn’t do much with him. That is until the final couple of laps, when he came on strong, took the lead and held on to win.

The margin of victory was three-quarters of a second over Hindman and Alan Brynjolfsson. Marcelli and Nate Stacy held on to finish third, followed by Winward Racing’s Nico Bastian and Russell Ward. Turner Motorsport’s Robby Foley and Vin Barletta were fifth.

BimmerWorld Racing’s Nick Galante and Greg Liefooghe were sixth, followed by Murillo Racing’s Eric Foss and Jeff Mosing. The second BimmerWorld BMW of James Clay and Mike Skeen were eighth, while Lewis and Monk had to charge late on fresh tires to get back to ninth. Alec Udell and Bryce Ward were 10th.

In TCR, the opening lap crash claimed Gottsacker, who started from the pole. Despite damage to the right-front corner, Norman was able to emerge from the first-lap incident with the lead. Teammate Spencer Brockman gave chase.

During the debris caution, Norman pitted the No. 33 Hyundai in order to take on fuel and get his damage repaired. That put Brockman in the lead with Ernstone giving chase. The slowest Grand Sport teams were mixed into the battle. That’s how Ernstone ended up having contact with DePew in turn 11.

Norman was able to charge through the field and got back to Brockman to take the lead on lap 28. From there, he held onto the lead until he made his pit stop to hand over to Gabby Chaves with 52 minutes remaining. That gave the advantage to Roadshagger Racing’s Jon Morley, who had stopped 10 laps earlier.

Morley had a nine-second lead once Chaves came out of the pits, but Chaves was able to run down the Audi at nearly a full second a lap. Once Chaves got to Morley, the two battled for multiple laps before Chaves got past in the Corkscrew with 26 minutes remaining.

Once in the lead, Chaves opened up a decent lead and held on to claim his and Norman’s third win of the year. The final margin of victory was 9.333 seconds over Ernstone and Morley. Brockman and Parker Chase were third, while LA Honda World Racing’s Ryan Eversley and Taylor Hagler were a lap down in fourth. Fast MD Racing’s Max Faulkner and James Vance were fifth.

The 2020 IMSA Michelin Pilot Challenge season will come to a conclusion at Sebring International Raceway on Nov. 13. The Alan Jay Automotive Network 120 will start at Noon and will be streamed on NBC Sports’ TrackPass service.