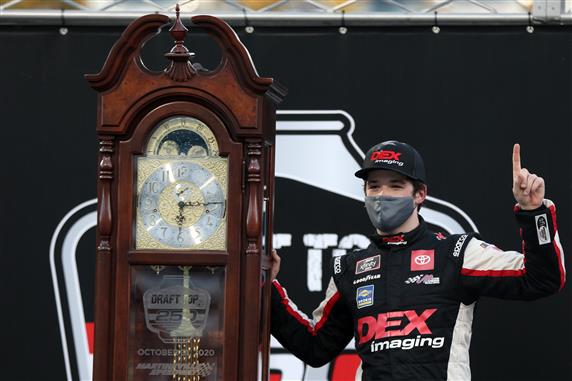 The Joe Gibbs Racing driver earned his fourth victory of the season in the series’ return to Martinsville Speedway, the first time the Xfinity Series has competed at The Paperclip since 2006.

"What's up dad? That was pretty awesome."

Burton eclipsed his father Jeff’s record as the youngest driver to win in the series at Martinsville (22 years, 22 days) and earned his fourth victory of the season.

“It was a really fun race,” Burton said in victory lane. “Martinsville is one of those places that’s really cool to win at. For me in particular because my family is from here. There’s a guy in a hot dog for Halloween. The fans here are awesome. It’s amazing to win here at what is one of my home tracks I would say and do what my dad did. I think it was his first Xfinity win was here.”

"I won't make any bones about it: I was super nervous about today."@J_Allgaier can breathe easy now going to @phoenixraceway, one of his best tracks statistically.

Says he was a bit surprised at how calm today was, especially compared to the Truck race last night. pic.twitter.com/sA7Hk6G9zf

For the first time in team history, KAULIG RACING IS HEADED TO THE CHAMPIONSHIP 4! ?@Justin_Haley_ battled all day and all year long to earn himself a berth in the Championship race next weekend at @phoenixraceway! ?#TrophyHunting | #DARK11ORSE | #Championship4 pic.twitter.com/2ElGIT2XaL

The 250-lap race was slowed 10 times for 63 total laps. AJ Allmendinger (led 63 laps) was forced to pit late with a flat tire after making slight contact with Burton.

Flat tire for @AJDinger from the lead. "He drove into the side of me, man. God damn it," he says.@HBurtonRacing assumes the lead.

The championship race will be held at Phoenix Raceway on Saturday, Nov. 7 at 5 p.m. ET.