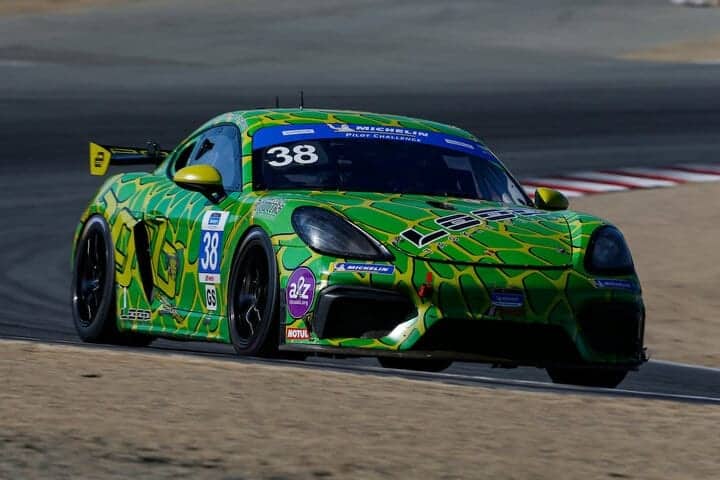 In the midday session Friday, Heylen was quickest overall in his Porsche Cayman GT4 MR with a lap at 88.564 mph. Heylen’s lap was four-hundredths of a second faster than Riley Motorsports’ Dylan Murry in a Mercedes. Sebastian Priaulx was third quickest in his Ford Mustang, while Westphal was fourth in his Audi. Archangel Motorsports’ Trent Hindman, driving a repaired Aston Martin after a crash at Michelin Raceway Road Atlanta, was fifth.

Rebel Rock Racing’s Robin Liddell was sixth in the sole Chevrolet Camaro GT4.R, while Winward Racing’s Alec Udell was seventh. Turner Motorsport’s Robby Foley was eighth in the No. 95 BMW, while Motorsport In Action’s Corey Lewis was ninth in the sole McLaren entered. Tom Dyer was tenth in the second CarBahn Audi.

In the late-afternoon session, Westphal showed that the CarBahn Motorsports with Peregrine Racing is not jaded in any way from their terrible strategy miscue two weeks ago. Westphal posted the fastest lap of the day at 88.613 mph, just five-hundredths of a second faster than Heylen’s lap in the first session.

Westphal’s lap was one-seventh of a second faster than Heylen, while KohR Motorsports’ Kyle Marcelli was third in his Aston Martin. Winward Racing’s Nico Bastian (driving once again in place of regular driver Indy Dontje, who is competing this weekend in ADAC GT Masters action at the EuroSpeedway Lausitz) was fourth fastest, while Dyer was fifth.

For those of you that are Hailie Deegan fans, the young racer had her struggles early on Friday. Having never raced a sports car at WeatherTech Raceway Laguna Seca, the undulating road course was sure to be a challenge. However, she seemed to be a quick study. She was three seconds off of Priaulx’s pace in the first session. By the end of the second session, Deegan’s best lap was only one-third of a second slower than Priaulx and 12th overall of all drivers.

In TCR, Eversley took the sole Honda Civic Type-R TCR on the property to the top of the chart with a lap at 85.872 mph, the quickest TCR lap of the day. Eversley’s lap was a quarter of a second faster than Wilkins. KMW Motorsports with TMR Engineering’s Tim Lewis Jr. was third quickest in his Alfa Romeo, followed by Roadshagger Racing’s Jon Morley and Fast MD Racing’s Max Faulkner.

Qualifying for the WeatherTech Raceway Laguna Seca 120 is scheduled for 12:20 p.m. ET. We’ll have a wrap-up of the session Saturday afternoon here on Frontstretch.