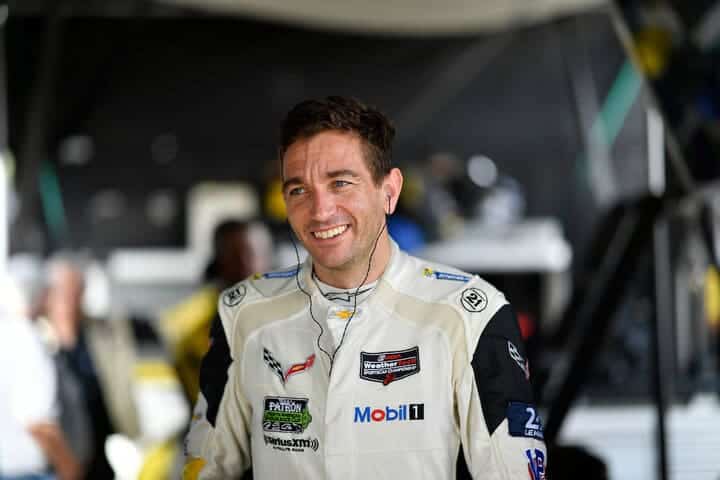 Corvette Racing’s Oliver Gavin announced on his Twitter feed Saturday morning (Oct. 31) that he will step away from full-time racing at the end of the 2020 season. The 48-year old Gavin has raced professionally for nearly 30 years, starting out in open-wheel competition in England before transitioning to sports cars.

2/4 I want to thank from the bottom of my heart each and every person who has shared that journey with me.
It’s been an amazing run, and I’ve been very lucky to have been able to drive at such a high level for so long. I’m extremely proud of what we’ve achieved together, cont pic.twitter.com/pA6ADACdUc

I look forward 2 exploring opportunities 2 represent @chevrolet & @CorvetteRacing in the future.
I must thank my wonderful wife Helen &my three fantastic children, Lily, Isaac & Fergus
They’ve been my rock throughout. So much love &support, couldn’t have done this without them ❤️ pic.twitter.com/oacyNmQRtM

Gavin started in feeder series in his native England, winning the Formula First Great Britain championship in 1991 before competing in the Formula Ford Festival. In 1993, Gavin moved up to British Formula 3, where he finished second in points. Over the next few years, he moved back and forth between Formula 3 and Formula 3000, then the top feeder series to Formula 1. In 17 attempts, Gavin only managed to qualify for eight races. In those eight starts, his best finish was fourth at Monaco in 1999.

Gavin had plans to eventually race in Formula 1 itself. He tested one time for Pacific Grand Prix in 1995 at Snetterton, which turned out to be a nightmare.

“I drove the car once, for five laps at Snetterton, and it had F1 suspension on one side and F3000 suspension on the other because they didn’t have enough bits,” Gavin told MotorSport Magazine in 2013. “That was my career as a Pacific test driver.”

After winning the 1995 British Formula 3 Championship, Gavin and Keith Wiggins put together a deal for Gavin to make his World Championship debut in the final Grand Prix of Australia to run at Victoria Park in Adelaide in place of Bertrand Gachot. However, he had to get a Super-license first. Unlike today, where there is a points system that determines whether you qualify for one, it was more subjective.

Despite being fitted into the rather terrible Pacific and doing an interview with Murray Walker about his upcoming debut, he ultimately never got to race. Crushed at the time, Gavin sought out F1 Supremo Bernie Eccelstone, who gave Gavin some time to talk. Eccelstone was quite honest with him.

“Oliver, here’s the deal: You’re obviously a very good driver, but the problem is that Pacific Grand Prix are going out of business,” Eccelstone told Gavin at the time. “They won’t be here next year. You haven’t tested the car properly, you haven’t driven at Adelaide before, you haven’t done a Grand Prix before. Come back to us with a good team next year and we’ll be delighted to have you.”

Sure enough, Adelaide ended up being Pacific’s final race. Gavin never got another chance to drive in a Grand Prix. However, he did get to test for Benetton in 1997 and 1999.

Following the Super-license mess, Gavin switched to closed-cockpit vehicles. He ran a full season of touring cars in 1996. After a generally failed return to open-wheel action, he switched to sports cars permanently for 2000. He drove in both Grand-Am and ALMS competiton for Intersport Racing in their Lola that year. 2001 saw him move to the GTS class, driving a Saleen S7R for Konrad Racing. He also made his first appearance at Le Mans.

Overall, Gavin has 49 career victories in American-based series (ALMS, the IMSA WeatherTech SportsCar Championship and the Rolex Sports Car Series). The first of these came for Konrad Team Saleen in the 2001 12 Hours of Sebring.