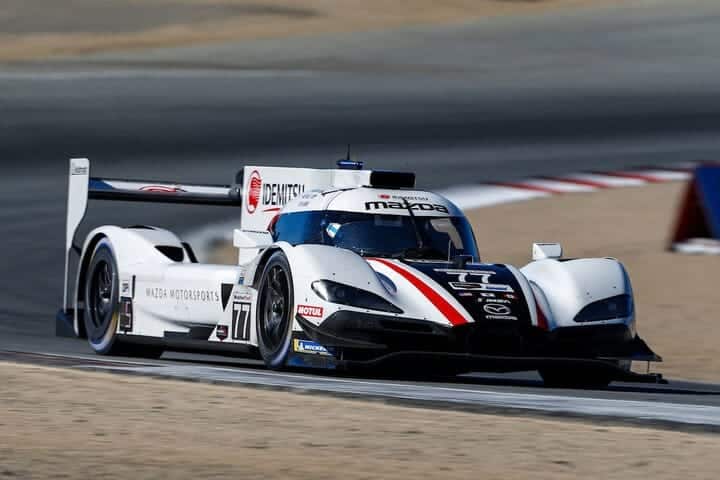 Mazda Motorsports’ Oliver Jarvis was fastest overall in IMSA WeatherTech SportsCar Championship practice Saturday afternoon (Oct. 31) with a lap at 106.442 mph. However, there are still some frayed feelings after the Motul Petit Le Mans two weeks ago.

Jarvis’s quick time of the day came right at the end of the session. It ended up being one-sixth of a second faster than Acura Team Penske’s Dane Cameron. Jonathan Bomarito in the second Mazda was third, followed by Wayne Taylor Racing’s Renger van der Zande in the fastest of the Cadillacs. JDC-Miller MotorSports’ Tristan Vautier was fifth.

The trouble started right at the beginning of the portion of the session where DPi teams were allowed to participate. On their out lap from the pits, Action Express Racing’s Felipe Nasr and Acura Team Penske’s Helio Castroneves collided in turn 3. Both cars suffered damage in the incident.

IMSA judged Castroneves to be at fault for the incident and gave him a stop and 60-second hold for “unsportsmanlike conduct.” Ultimately, the No. 7 Acura ARX-05 never completed a lap during the session, while Nasr was able to time in sixth quickest.

What caused these shenanigans in a practice session? It appears that there may still be some hard feelings from how the Motul Petit Le Mans played out two weeks ago.

Pipo Derani and Ricky Taylor collided with 13 minutes to go in the race, resulting in Derani hitting the wall and Ricky spinning out. Both sides blamed the other for the incident, with Castroneves confronting Derani on Taylor’s behalf after the race. By all indications, no one has spoken to each other since after said post-race conversation.

This wasn’t the only issue that took place in the session. Later on, JDC-Miller MotorSports’ second car with Matheus Leist driving had a suspension issue in the right rear corner and spun at turn 2. He was able to resume, only to spin again and stop. This brought out a red flag for 13 minutes.

GT Le Mans saw Corvette Racing’s Jordan Taylor top the chart with a lap at 97.920 mph, good for eighth overall. Jordan’s lap was three-tenths of a second faster than BMW Team RLL’s Connor de Phillippi. Porsche GT Team’s Nick Tandy was third, followed by Jesse Krohn and Oliver Gavin. Prior to Saturday’s practice sessions, Gavin announced his intention to step back from full-time racing at the end of the season.

In the first session, which took place bright and early at 8 a.m. local time, there were no such issues. The full 60 minutes were clean and green. Here, Derani was fastest with a lap at 106.219 mph.

Derani’s lap was a half-second faster than van der Zande. Juan Pablo Montoya was third in his Acura, then Castroneves and Jarvis.

GT Le Mans saw Antonio Garcia fastest in the No. 3 Chevrolet Corvette C8.R with a lap at 98.376 mph, the best GTLM lap of the day and good for 10th overall. Garcia’s lap was one-eighth of a second faster than Tandy’s Porsche, followed by Earl Bamber in the second Porsche. Tommy Milner was fourth, while John Edwards was fifth.

Bill Auberlen was fastest in GT Daytona with a lap at 95.061 mph, the best lap in class for the day. Auberlen was one-sixth of a second faster than the Lamborghini of GRT Magnus’ Andy Lally. Meyer Shank Racing with Curb-Agajanian’s Mario Farnbacher was third, then the McLaren of Compass Racing’s Paul Holton. Scuderia Corsa’s Alessandro Balzan was fifth.

There is only one LMP2 team entered this weekend, that being PR1 Mathiasen Motorsports. They only participated in the first practice session, where Simon Trummer was fastest with a lap at 101.324 mph, good for ninth overall.

Qualifying for the Hyundai Monterey Sports Car Championship is scheduled to be held bright and early Sunday morning. The session is scheduled to begin at 11:25 a.m. ET (8:25 a.m. local time) and will be streamed live at IMSA.com.