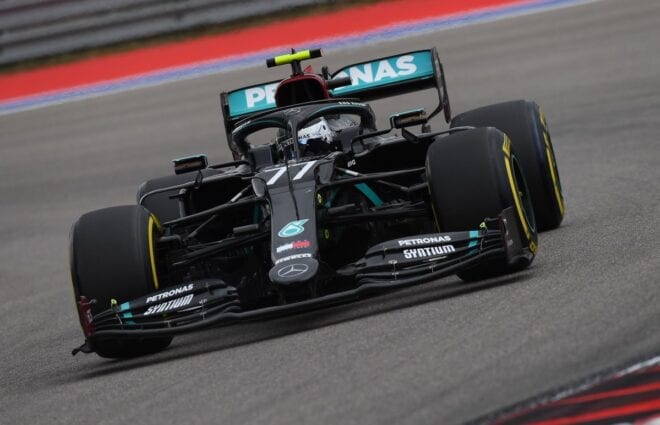 For the first time in nearly 14 years, F1 returned to the legendary Enzo and Dino Ferrari Circuit in Imola for the Emilia Romagna Grand Prix.

Last time out in Portugal, Valtteri Bottas dominated the weekend. Fastest all throughout practice as well the first two qualifying sessions, he was nipped by his teammate Lewis Hamilton for the pole in Q3. Hamilton would eventually beat Bottas in the race to claim his record setting 92nd victory, a bittersweet moment for Bottas.

Flash forward a week and finally Bottas would best his teammate.

By a margin of 0.097 seconds, Bottas will lead another Mercedes front-row lockout in 2020. Continuing the streak of Mercedes scoring every pole in 2020, Saturday marked the Fin’s 15th career pole and fourth of the season.

In an unusual two-day weekend due to the heavy rains in Germany last week, the FIA opted for only a single practice session a few hours before qualifying.

Hamilton lead the session with a time of 1 minute, 14.726 seconds putting him just under three tenths quicker than Verstappen. Bottas came home third around five tenths off Hamilton’s time.

Gasly of AlphaTauri was fourth and Leclerc of Ferrari wound up fifth.

In Q1, Bottas opened up the charts with a blistering lap time. With teammate Hamilton in hot pursuit, he managed to best Bottas on track until the stewards deleted his lap time for track limit breaches. The deletion relegated Hamilton to second, 0.008 seconds off of Bottas.

Bottas, Perez and Albon were among the drivers who also suffered deletions or warning from the stewards.

Nicholas Latifi, both Haas cars and both Alfas were eliminated after Q1. Antonio Giovanazzi will be starting last for the second time this season.

Q2 was much of the same, only this time Bottas would nip Hamilton by a slightly larger 0.058-second margin. Albon would go for a spin and get his time deleted again in Q2, forcing some late-session heroics from the Red Bull driver.

Right next door, his teammate Verstappen suffered a spark plug failure, a very rare occurrence to say the least. Christian Horner and his men went to work and were able to give Verstappen one shot at making Q3. The Dutchman delivered and got his car up to P4 by session’s end.

In the top-10 pole shootout, Bottas finally got the better of his Mercedes teammate. In their two final laps of the session, Hamilton would go P1 before a fraction of a second later Bottas would claim pole by a margin of 0.097 seconds. Bottas’s pole lap would clock in at a 1:13.609.

The lights will go out for the Emilia Romagna Grand Prix tomorrow at around 7:10 a.m. ET or 12 noon local time.

Bottas will look to claim another victory on the season, while Hamilton shoots for career win 93.

Alex has been writing in the motorsport world since he was 19. Starting his career with the NASCAR Pinty's Series, Alex's work has been featured in Inside Track Magazine, TSN & NBC Sports as well as countless race programs. Alex has also worked within the junior hockey world in Canada, appearing as a desk host for the OHL's Barrie Colts. He also got the opportunity to cover the 2018 Chevy Silverado 250 which appeared as the headlining article on NASCAR.com.
@@alexgallacher95
Previous Xfinity Positively Impacts NASCAR During Trying 2020 Season
Next Oliver Gavin Announces Retirement From Full-Time Driving At End of 2020

Tony Kanaan to Run Ovals in Chip Ganassi Racing’s No. 48