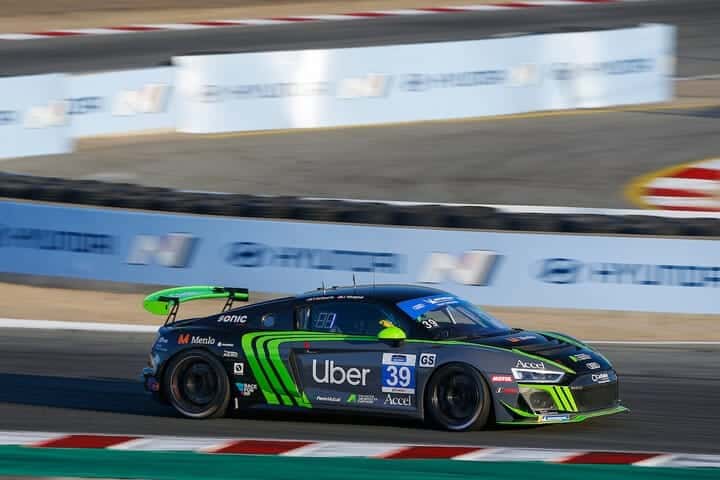 For McQuarrie and teammate Jeff Westphal, this is exactly what was necessary due to the drive-time issues that they had in the FOX Factory 120 at Michelin Raceway Road Atlanta two weeks ago. They had a car that could have won, but an ill-timed full-course caution closed the pits during the three-minute stretch that the team needed to make their final pit stop to put Westphal in the car and get him his minimum drive-time (40 minutes).

Failing to do so meant they had to pull out of the race before the 90% mark in order to not be classified at the rear of the field. A 12-point haul instead of a potential 35 put them 20 points back of KohR Motorsports’ Kyle Marcelli and Nate Stacy with two races to go.

That said, the KohR Motorsports Aston Martin will not be far away when the race gets underway. Stacy qualified second, but a full six-tenths of a second slower than McQuarrie, who was fastest in all three sectors on-track. Winward Racing’s Russell Ward, fresh from a 22nd-place finish in last weekend’s Total 24 Hours of Spa, will start third. PF Racing’s James Pesek was fourth in his Ford, followed by Archangel Motorsports’ Alan Brynjolfsson.

In TCR, Bryan Herta Autosport’s Harry Gottsacker took the class pole with a lap at 86.208 mph, good for 13th overall. Gottsacker’s lap was a tenth of a second faster than teammate Mason Filippi. Ryan Norman in a third Hyundai will start third, followed by the Audi of Fast MD Racing’s Max Faulkner. Spencer Brockman will start fifth.

Two teams did not take part in the session. Turner Motorsport made a driver change for this weekend, putting Robby Foley and Vin Barletta in both of their cars. In practice, this means that the No. 96 may not take part in the race. If they do, they’ll start in the back. The other team not to participate was the Roadshagger Racing Audi for Gavin Ernstone.

The WeatherTech Raceway Laguna Seca 120 is scheduled to go green at 6:35 p.m. ET Saturday. The race will be streamed live on NBC Sports’ TrackPass service starting at 6:30 p.m.