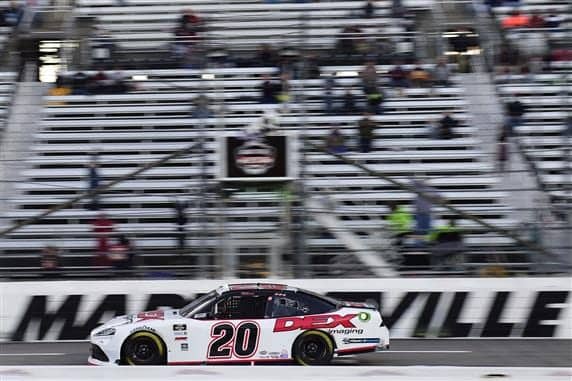 It had been 14 years since Kevin Harvick took the last checkered flag for the NASCAR Xfinity Series at Martinsville Speedway. But Saturday’s Draft Top 250 made up for plenty of lost time.

It was the perfect meeting of many elements that made Saturday’s race a memorable one. There was the race for the win, along with the jockeying to make the final playoff field at Phoenix, at a place where bumpers get wrinkled up and drivers’ emotions sometimes get pushed past their limits. And on to of all that, the race went green on Halloween.

But nothing was too spooky for Harrison Burton, as he backed up his win from Texas last week by collecting his fourth trophy of the season and of his Xfinity Series career.

Along with the highs of Burton’s win came the four drivers who left Martinsville with bags full of candy and the chance to race for the 2020 championship next weekend in Arizona.

Allgaier finished runner-up to Burton and comfortably advanced into the final round. He could have pushed the issue and tried to go for the win. But Allgaier’s been in this situation before, instead using his past experiences in the playoffs to earn a shot at a championship-winning performance at Phoenix, a place where he has plenty of good history.

Austin Cindric finished 10th on Saturday. But he isn’t the regular-season champion for nothing. He has five wins to his name and has run well at Phoenix in the past. Could it be the Team Penske driver who claims the championship?

Though quiet on Saturday, Chase Briscoe’s nine wins in 2020 make him the winningest series driver. He is destined to compete for Rookie of the Year honors in the Cup Series next year. Can he cap off his stellar Xfinity Series career and go out on top?

Lastly, 2020 has marked the season that Justin Haley finally came into his own at Kaulig Racing. He does have three wins, although they have all come on superspeedways. He will likely be the biggest underdog amongst the championship contenders. Can he pull off the upset in this title fight, just like he did with his first Cup Series win at Daytona last summer?

On the opposite side of the spectrum, there were four drivers who left Martinsville with bags full of rocks and with all championship ambitions gone.

Two-time winner Gragson will find it hard to forget about Texas, as his third-place finish on Saturday was not enough to help him move on to the final round. We’ll see how well he can rebound in 2021 with JR Motorsports.

Chastain, who’s moving up to the Cup Series next year with Chip Ganassi Racing, will go without an Xfinity Series championship to his name.

Brandon Jones does have three wins this year. But he just wasn’t strong enough to edge his way past the Round of 8. Fortunately, he will remain at Joe Gibbs Racing for another season to try it all again.

And for Ryan Sieg to make it this far into the playoffs with his family-owned operation is deserving of a pat on the back. Even though he’s out of the running, it doesn’t mean that Sieg can’t use this season as a form of motivation to repeat his successes earned this year — and go for more.

As far as the race for the win went, Burton may have been triumphant, but AJ Allmendinger was distinctly the second-best car at the paperclip. The two-time 2020 winner kept his No. 16 Kaulig Racing Chevrolet in the lead for 68 laps. But contact with Burton with 52 laps to go resulted in the deflation of Allmendinger’s left-rear tire, forcing him to make a costly green-flag pit stop and lose two laps. Unfortunately, he would not get back into contention and would settle for a disappointing 26th-place finish. Not the way he would’ve wanted his 2020 season to end, but there’s always next year for us to see “The ‘Dinger” make more marvelous moves on the track again.

54-year-old Canadian racer Donald Theetge made his first start of the season on Saturday, but it took a wild turn on lap 76. He would spin his No. 90 Chevrolet over the curbs in turn 3, coming back up in front of BJ McLeod and Stefan Parsons. They all came to rest against the turn 3 wall with all the mud kicked up by Theetge located beneath them. The incident resulted in a red flag, which track workers spent shoveling mud off the racing surface. Theetge carried on to finish 31st, five laps down. He is scheduled to race in the season finale at Phoenix for his sixth career Xfinity Series start, again for the DGM Racing team.

Even though he’s been a part of the NASCAR scene for 16 years, it’s been a while since we’ve seen JJ Yeley given such positive exposure in a race. After starting last in the 39-car field, on a lap 65 caution, his Rick Ware Racing team made the call for Yeley to stay out after a cycle of pit stops. He led five laps in total before losing the lead to Burton shortly after the restart. It’s the first time he’s led multiple laps in a race since he led three laps at Indianapolis in 2018. Yeley endedup finishing in the 14th position on the lead lap. Although it wasn’t a “magical” type of finish, the Arizona native still got to have time in the spotlight.

Now that the scary nature of Halloween racing at Martinsville is out of the way, all eyes will be set on the finale event at Phoenix Raceway. The last time the series raced there, Jones took the win just before the COVID-19 pandemic stalled NASCAR action for two months. But now we have just 200 more laps before season’s end. A championship awaits to be awarded. Allgaier, Briscoe, Cindric and Haley must go big or go home. Right now.

32 races down, one more remains. The Desert Diamond Casino West Valley 200 will take place on Saturday, Nov. 7, slated to begin at 4:00 p.m. ET. NBC Sports Network will televise the event while MRN and Sirius XM will broadcast the race on radio.