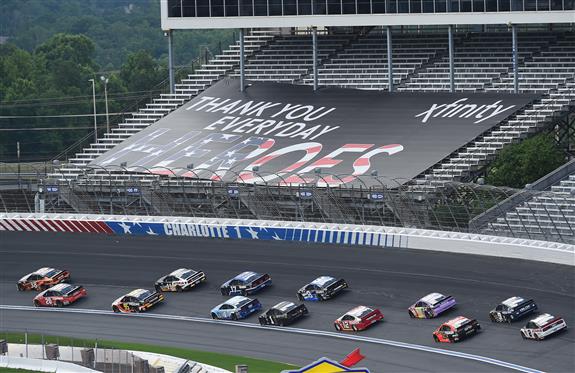 The 2020 NASCAR season is one that won’t soon be forgotten, as the industry had to adjust on the fly due to the COVID-19 pandemic. The new normal consists of neither practice nor qualifying, instead one-day shows.

Meanwhile, it was a pivotal season for NASCAR, who for the first time since 1970 was without an entitlement sponsor. NASCAR insisted on premier partners, consisting of Anheuser-Busch, Coca-Cola, GEICO and Xfinity.

For Xfinity, becoming a premier partner was a new opportunity, spending the previous five seasons as the entitlement sponsor of NASCAR’s second division. And even through this new occasion in 2020, the brand remained loyal to the NASCAR Xfinity Series.

But what Xfinity didn’t anticipate was the sport to be shutdown just four weeks into the season due to the pandemic. Surely it was a small hurdle to overcome in order to promote its product.

“From the partnership standpoint, not 100% what we had planned or anticipated,” Matt Lederer, VP of brand partnerships and activation at Comcast, tells Frontstretch. “Over the last five years of being in the sport at the NASCAR Xfinity Series level, we had really begun to pivot a lot of our activations into digital and social, in terms of ways to reach the fans beyond TV.

“In a strange way, the oddity of this season didn’t detour or impact many of our activation plans because we were already in the space where digital and social has done nothing but grow for the sport for obvious reasons.”

In fact, Xfinity’s numbers were up across the board. In the first half of the season, the @XfinityRacing handle on Twitter and Instagram added over 25,000 followers combined, with over 20 million impressions, up 44% from last year. Because the brand was shifting its focus to digital and social media, it didn’t derail plans.

After more than six weeks on the sidelines, NASCAR announced on April 30 it would resume the 2020 season at Darlington Raceway on May 17.

Those new premier partners were crucial in getting the season back underway.

“I would say the communication line between us and NASCAR was fantastic,” Lederer says. “They gave us updates every step along the way. … I’m sure that I speak for other partners because I know they take their partnership – especially premier partnership – very seriously. It was really outstanding.”

Over the 10-week hiatus, NASCAR on FOX began broadcasting iRacing events, which is right up Xfinity’s sleeve as a TV and internet service provider. Surely NASCAR was going to capitalize on that.

“We’re grateful to have so many partners that contribute both on and off the track, but our partners at Xfinity are working with us to help affect change and shape the future of our sport,” Jeff Wohlschlaeger, VP of partnership marketing, NASCAR says in a statement to Frontstretch. “They have demonstrated leadership and innovation across each platform they support, including important initiatives like esports, the introduction of new technologies, sharing best practices on diversity and inclusion, and elevating the profile of drivers competing in the NASCAR Xfinity Series. Their commitment to the sport is exemplary.”

Prior to the sport returning at Darlington, Xfinity unveiled a new 30-second commercial, titled “Return of Loud,” just before the in-person return. Additionally, the company purchased more signage at a few of the racetracks: Darlington, Charlotte Motor Speedway and Bristol Motor Speedway.

During the Cup race Sunday, ⁦@Xfinity⁩ will have this 30-second ad for NASCAR's return, titled "Return of Loud". pic.twitter.com/9cwIQf2euU

The signage didn’t say “Xfinity” in big, bold letters; rather, it thanked the frontline heroes battling to save lives during COVID-19. And though there weren’t any fans in attendance at those specific racetracks, it was a good investment, according to the company.

“Anytime we think about signage, ironically we think more about the TV audience than the at-track audience,” Lederer says. ”That’s not to diminish the at-track audience, that’s important and there is lost value to all partners for not having fans at the track. … What we wanted to do was we wanted to buy some signage that thanked our frontline heroes, both frontline heroes that are out in the public but also to make sure our employees saw it as well.”

Aside from the signage at track, Xfinity also stepped up and was the presenting partner of the fastest lap award across all three national touring divisions this season. Little did the company know it would be a contributing factor to how the starting lineup was set for the following week’s races.

That, too, gave the brand some recognition across the board.

“The goal this year from a product standpoint within NASCAR and will be I would anticipate for next year as well, is to have speed be synonymous with both Xfinity internet and NASCAR,” Lederer says. “The exposure value across the board was really strong. What’s most important to me is the consistency. … I want fans to know speed is synonymous with NASCAR and Xfinity internet.

Meanwhile, with travels restrictions and no vaccination, Xfinity had to cancel some of its marquee NASCAR events. The annual Xfinity Takeover of Philadelphia? Off the schedule. The Comcast Community Champion awards banquet will take place virtually Nov. 6. The champion’s trip to Universal Orlando Resort – which used to host just the Xfinity champion but this year was going to feature the champions from all three national touring series – is also canceled.

Because those events contribute in-person fan engagement, Lederer says he is personally disappointed those events have been affected.

On the flip side, Xfinity is the entitlement sponsor of the Cup race at Marinsville Speedway this weekend, – the Xfinity 500 – the final event in the Round of 8. It’s the first time the company has sponsored a NASCAR race.

“I think it’s important for us as a sport to take that front-and-center role with the fans again and our employees,” Lederer says. “When I think about where this brand [has grown] in the sport over the last six years, to now be the brand that’s going to decide the final four heading into Phoenix [Raceway], that’s extremely exciting.

“The fact it times up well with big-brand moments that happen for us at the end of the season. Whether it be the NASCAR Xfinity Series playoffs or the fact we just announced or Comcast Community Champion; we strategically want the brand to have a big role at this time of the year.”

Since NASCAR is entering the penultimate race weekend of the season, it means it’s the only sport this year to run its full schedule. Altered, yes, but knock on wood, all 36 Cup races will get in, which is important for the sanctioning body, teams and presenting partners.

“It was incredibly important for the sport to have some type of normalcy,” Lederer adds. “The fact they are going to get the whole season in across all three national series, I tip my hat off to Steve Phelps (president of NASCAR), Steve O’Donnell (NASCAR evp and chief racing development officer) and Jill Gregory (NASCAR evp and chief marketing and content officer).

“From a brand standpoint, we’re happy we got a full season in. We got all of that exposure that we were hoping for from TV, but [NASCAR] should be really proud for what they’ve accomplished.”

For 2021, Lederer says in a perfect world it would go back to 2019, where the pandemic is gone and all parties are allowed at the racetrack. But from an activation standpoint, he believes it will look similar to 2020.

“I would anticipate for the first half of the year that we are limited, still, with what we can do at the track,” he says. “… I would expect a very similar type of activation. That was the way we were going anyways, so I don’t expect too much. I hope at some point in the 2021 season we’re going to be able to get back to the track.”