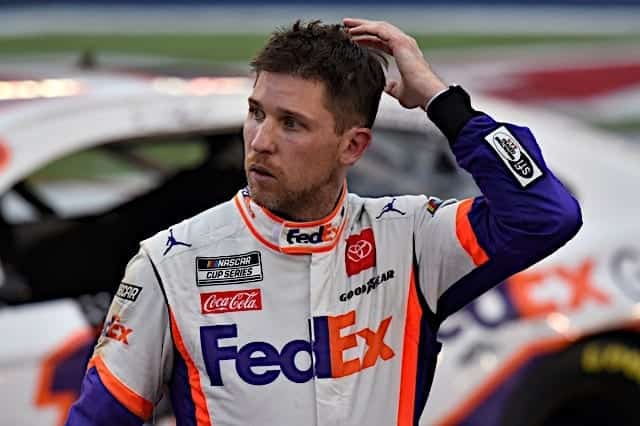 Despite seven wins so far in 2020, Denny Hamlin rode the playoff cutline for most of the NASCAR Cup Series’ Xfinity 500 at Martinsville Speedway. With just a couple points separating him and Kevin Harvick, Hamlin found his way into the championship round at Phoenix Raceway after a last-lap incident involving the No. 4.

Hamlin led 42 laps before his car began to get away from him. Even after having to pit twice to fix loose lug nuts later on, Hamlin recovered to finish 11th.

“I think we were in [most of the race],” Hamlin said in his post-race interview. “Just lost the handling there as soon as it [became] night and [we weren’t] very good; but a lot of that too is I was getting up in sixth or seventh and some guys’ teammates were kind of rubbing up against me. Like, yeah, I don’t want to cut a tire, so I’m kind of backing out of that, and then we kind of fell to a spot that was a little bit more open.

“Proud of this whole team, [but] feel bad for Kevin [Harvick]. They probably deserve a little bit better than that – it’s just the format I guess, three races and everything you do for eight innings doesn’t matter if you don’t have a great ninth inning. It’s just tough to see, I really wish we were gonna race those guys next week, but it’ll be a tough battle with all those other three [drivers] that we’re going to have to race, and we’re gonna have to definitely step up our short track program for sure.”

Hamlin thought his car fading as the race unfolded was due to a few factors.

“Definitely wasn’t as good as the sun started setting,” Hamlin said in his post-race interview. “I really just struggled with the balance and I don’t think it was necessarily a this race thing, the last 4 years at Martinsville it’s been the same kind of thing where we get to the end of it and we’re not as good when the track cools off or rubbers up or whatever it might be, but I told Chris after the race – ‘I’m gonna spend a week this offseason working on Martinsville trying to figure out why when it gets nighttime we’re just not as good. Let me know when you want to go do simulator work on it, so obviously definitely want to get better.”

Outside of Harvick, Hamlin won the most races of any driver in 2020. He kicked off the season with a victory in the Daytona 500, and reeled off six more once the Cup Series returned from its COVID-19 pandemic hiatus. Hamlin will not have to compete against Harvick for the title after the No. 4 team was eliminated at Martinsville.

“I think they deserve to be in…they got nine wins,” he said. “There’s not a person on this planet that would say they’re not a top-four team, but we wanted to create a ‘Game 7 moment,’ so this is what you get. If you have a bad race or two in a three-race series, you’re out. We’re very fortunate with our FedEx team to be able to lean on all the work that we did in the regular season to get playoff points, [we won] the most stages throughout the season, we’re optimistic [for Phoenix]. We’ll see.”

Hamlin won the fall event at Phoenix last year in a clutch situation, securing a spot in the title round at Homestead-Miami Speedway. With Phoenix now the site of the season finale, Hamlin was asked about his setup for next weekend.

“It’s an entirely different ballgame now, it really is,” he added. “The aerodynamic package is a lot different, there’s no similarities that you can really draw to it. You just never know, but obviously we’re gonna be ready, we’re gonna be prepared and hopefully we’ll go out there and show what we got.”

Hamlin will compete against Brad Keselowski, Joey Logano and Martinsville winner Chase Elliott for the 2020 Cup championship. Coverage is scheduled to begin at 3 p.m. ET on Sunday, Nov. 8 on NBC.

Brad has to love his chances with the rocket he has waiting.

Eric Jones was told over the radio to not pass denny hamlin for any reason, Sorry but that is not RACING that is why NASCAR’s playoffs are so FAKE

Please read my post. I feel the same way. Who got caught doing the same thing a couple of years ago and they got suspended and fined. That move was total classless crap and I expect nothing less from the Gibbs organization.

About 80 seconds later, on the No. 20 team’s radio channel, spotter Rick Carelli said: “Don’t pass him, Jones. Stay with him and drive what you can.”

If this is the case, that is cheating and don’t give me any team orders. Each driver drives as hard as he can the entire race and yet a teammate is told not to pass him. Hamlin should sit next Sunday and Harvick should be put into the field for the Gibbs team cheating. Gibbs should face a huge fine and other penalties also. Any bets that won’t happen?

Who got suspended a couple of years ago for not racing as hard as they could under similar circumstances. I forget, but it did happen and the precedence has been set. Watch Gibbs/Hamlin skate. Oh, wait, I forgot, CRAPCAR won’t do anything to Hamlin because he is a new owner with MJ. CRAPCAR will fall all over those two next year and it will be worse than Danica. Pathetic.

And Harvick should get a 20 point penalty for purposely wrecking Kyle Busch. With both Hamlin and Harvick penalized that will hand the final spot to Bowman.