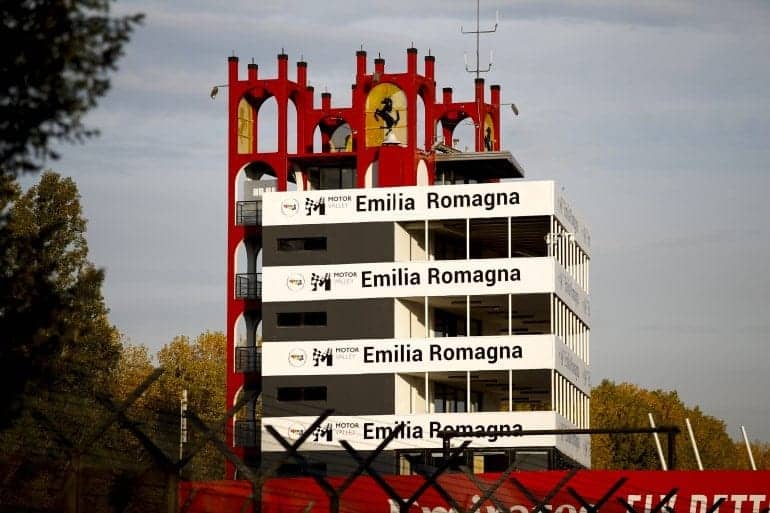 For Lewis Hamilton, winning the Emilia Romagna Grand Prix looked like a case of things just going his way.  Hamilton qualified second, leaving him at a disadvantage to his teammate.  When Valtteri Bottas took the lead in a convincing fashion, it looked like the Finn might be able to disrupt Hamilton’s dominance.

That Max Verstappen also made his way by Hamilton on the opening lap provided further evidence in what looked like a day for Hamilton to prove vulnerable.

With Bottas damaging his car by driving over the leftovers of Lance Stroll’s front wing and unable to hold his thoroughbred speed at the front, Hamilton began to find an opening.  That Verstappen could not pass Bottas, meant that they were running times easily matched or bettered by Hamilton.

The two leaders pitted, leaving an opening or Hamilton to lay down fast laps and cover their pace with ease.  When he pitted he came out four-seconds in front of Bottas and the race was, in effect, over.

The late-race drama did nothing to thwart Hamilton’s chance at victory and at the end, he earned his 93rd career win and his ninth of the year.  He now leads the driver’s standings by 85 points (282 – 197) over Bottas.

Verstappen suffered some kind of failure, possibly a tyre or possibly a part, and lost his car with a handful of laps to go.  Under the ensuing safety car, George Russell took himself out of the race as he spun off the track and into the barrier.

From there, Alex Albon spun once under green and fell to last, and Charles Leclerc drove off the track to give his fourth-place spot away.

Mercedes finished in one-two order and demoralized their competitors by winning their seventh-straight Constructor’s title.  Daniel Ricciardo made a quiet drive into the third spot and was followed by Daniil Kvyat claiming a surprising fourth.

Leclerc wound up fifth, following by Sergio Perez who had a podium in his grasp but his team called for a questionable late pitstop.  Carlos Sainz and Lando Norris gave McLaren the seventh and eighth spots, while Kimi Raikkonen finished in the points for the second time this year, in ninth.

Antonio Giovinazzi rounded out the top ten by earning his third points-paying finish of the season and when combined with Raikkonen’s result, giving Alfa Romeo their best result of the year.

– Mercedes scored yet another Constructor’s Title, bringing to total to seven.  They accomplished this feat by winning all seven consecutively tied Ferrari’s record in that regard, though Ferrari still hold the overall title with 16.

MAKING @F1 #HIS7ORY! ❤️ WE ARE CHAMPIONS OF THE WORLD FOR A SEVENTH TIME!! ? pic.twitter.com/FqAHS6yYza

During the hybrid era, Mercedes have

– Daniil Kvyat is often an example of a driver being in over his head.  He has made questionable moves, has driven the car too hard at the wrong time, and often is a disaster waiting to unfold.   Therefore, Kvyat’s fourth-place effort deserves some credit.

This kind of finish is exactly what he should be showing every so often, being both quick enough to be near the front while fortunate enough to benefit from other drivers’ errors.  While Kvyat may not be back with AlphaTauri next year, putting together a solid close to the season could go a long way toward lining up his next gig.

– Daniel Ricciardo secured his second podium finish of the season, definitely ensuring that his bet with team principal Cyril Abiteboul becomes a reality, while also putting Renault into third place in the constructor’s title fight.

Ricciardo legged his Renault through the race with aplomb but never showed the speed that the Renault had just a couple of races ago.  While the performance dip for the French team may be of some concern, Ricciardo’s third-place finish gave everyone a rare treat.  Not only did Ricciardo have a shoey (drinking the champagne from his shoe) but Hamilton joined him.

One for Danny and one for Lewis ?

– Sebastian Vettel seems to be enduring fascination ways to amass terrible results this season.  Though the German driver has found ways to do this on his own, at Imola his Ferrari pit-crew helped him along.

Come into the pits just past mid-point of the race, Vettel looked set up for a usual pitstop.  And then the team locked up putting the left rear on.  And then the front right.  And those two miscues were enough to drop him a couple spots and

– Alex Albon may have sealed his fate with Red Bull with his late-race spin after getting passed by Perez.  Albon looked positioned to finish in sixth and make Red Bull contemplate keeping the young Thai-Brit driver around for another year.

Christian Horner has openly applied pressure on Albon in the press, going so far as to say that the Turkish GP is Albon’s last chance to shine – and the was before Imola.  Albon has continued to show excellent pace but he seems to have blips when he loses his car control and those moments may be his undoing.

The Questionable (or What Were They Thinking?)

– Racing Point pulled the biggest strategy blunder of the race when the team pitted Sergio Perez and gifted third place to Daniel Ricciardo.  The move was as baffling   Perez had the measure of Ricciardo and looked poised to bring home a podium finish for the team.  Instead, Perez fell down the order, finished sixth, and missed on collecting valuable points for the constructor’s title.  With Lance Stroll’s P13 finish, the team finds itself further struggling for the third spot.

– George Russell added to the peculiarity of the latter stage of the race by spinning off the track during the safety car period.  Russell appeared to be swerving in an effort to keep his tyres warm and lost control of his Williams.

The dejection for Russell shown through as he sat against the guardrail near his car, clearly reveling in his error.  To add to his embarrassment, the mistake cost Williams a points-paying finish, something that has yet to happen this season.

– Hamilton had fallen behind and sat third and looked to be out of contention for the win.  But when the leaders pitted and Hamilton stayed out, ripping off laps, he earned the strategic advantage.

“Max stopped much earlier than I thought he would and then Valtteri stopped to cover him,” stated Hamilton.

“There was no way I was doing the same. Naturally, at the beginning of the race we get given a bunch of different options of strategy and I understood that the only way to do something was to do something different, to extend as long as I could. I didn’t know how long the tyre would go but I think that’s really where the race was won today.”

– Albon may have given the understatement of the day when discussing his fall from sixth to last.

“In hindsight we could have done something a bit different there and boxed, but it’s one of them things. I think we could have easily got a podium today…[instead we finished in] last position. Not what we wanted.”

– Albon teammate was also at a loss for words when talking about his sudden spin.  He stated, “once I got past Valtteri, the pace was good, the car was feeling good and suddenly on the straight, I lost the car because there was a tyre blow-out. I don’t exactly know what happened, but when I quickly looked at the car, there was nothing broken on the car, so it’s a big shame.”  Apparently, there was something mysterious going on with the Red Bull rides at the ERGP.