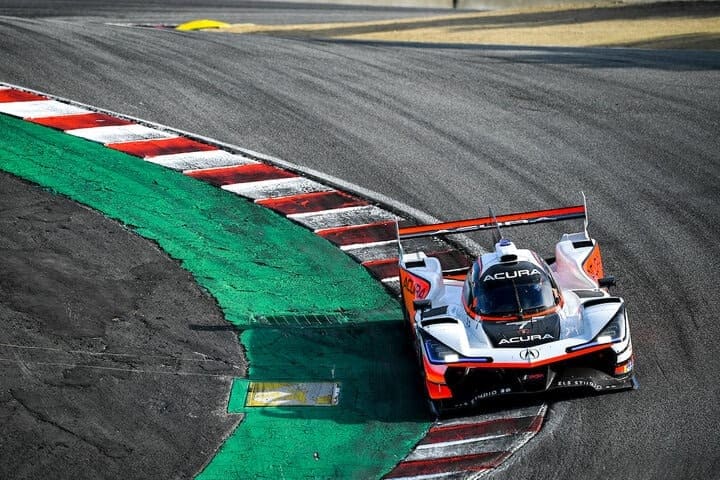 Montoya led the field to green Sunday afternoon and quickly started to pull out an advantage over the rest of the field.  Within a few laps, he had an eight-second lead on Castroneves.

Castroneves had his own issues early on.  20 minutes into the race, he had contact with Corvette Racing’s Jordan Taylor exiting turn 11.  This caused a dive plane to break off of the nose of his Acura ARX-05, negatively affecting his handling characteristics.  Despite the contact, his pace was not hampered too much.

Much of the discussion in the DPi class has centered around the whole mess at Michelin Raceway Road Atlanta between Acura Team Penske and Action Express Racing.  Earlier in the weekend, Castroneves copped a stop and 60-second hold for “unsportsmanlike conduct” during practice.  Why?  Because he intentionally sideswiped Pipo Derani on the out lap during a practice session.  NBC Sports stated prior to the race that no one from either team would talk about the situation on camera.

Did the rivalry come back during the race?  Yes and no.  Yes, the No. 7 Acura and Action Express Racing’s No. 31 Cadillac spent almost the entire second half of the race running together, but they never had contact with each other.

Cameron and Montoya were pretty much untouchable on Sunday.  The lead was extended to as much as 18 seconds over second-place.  However, a late caution bunched everyone back up.  Remember the contact that Castroneves had 20 minutes into the race?  Nearly two hours later, the Mazdas of Tristan Nunez and Harry Tincknell had contact of their own in turn 11 (described on the NBCSN broadcast as “Mazda-on-Mazda crime”).  This kicked up the aforementioned dive plane from the dirt into the middle of the track.

With everyone bunched up, Cameron was able to get a good restart and pulled out a couple of seconds on the pack.  Meanwhile, Ricky Taylor had to deal with Felipe Nasr stalking him from behind.

Cameron ended up losing most of his advantage when he came across the slower GT Daytona cars and had trouble getting past them.  That put Cameron and Ricky Taylor nose-to-tail, giving Acura Team Penske the opportunity to institute the orders.

The margin of victory was just over a half a second for Castroneves and Ricky Taylor over Cameron and Montoya.  Derani and Nasr ended up third, followed by Mazda Motorsports’ Tincknell and Jonathan Bomarito.  Jarvis and Tristan Nunez were fifth in the second Mazda.

In LMP2, there was only one team entered.  PR1 Mathiasen Motorsports’ Patrick Kelly and Simon Trummer claimed the victory by default.  Kelly also clinched the LMP2 championship just by starting.  Despite the complete lack of competition, Kelly was still overjoyed with his championship.

Corvette Racing’s Jordan Taylor led the field to green in the GT Le Mans class.  He managed to keep the advantage early on without issue, but the contact with Castroneves forced him to pit for a checkup.  That gave the lead to teammate Oliver Gavin until the first full round of stops.

Porsche GT Team put their Porsche 911 RSR-19s on separate pit strategies as well.  Laurens Vanthoor made his first stop right around the time Jordan Taylor did.  When the first sequence was complete, he was in the class lead and held on until he made his second stop on lap 52.

Teammate Frederic Makowiecki, who was on a more traditional strategy, assumed the lead at that point.  When Makowiecki stopped with a little more than an hour to go, the No. 912 Porsche with Earl Bamber now at the wheel assumed the advantage.  Antonio Garcia moved the No. 3 Corvette back up to second.

The late caution allowed Garcia to get up to Bamber’s rear bumper for the restart.  Over the final 15 minutes of the race, Bamber and Garcia fought hard for the lead, but Garcia was never able to get a run on the Porsche.  At the end of 160 minutes of racing, Bamber and Vanthoor were able to take their first win of the year and the second straight for Porsche.

Bamber and Vanthoor’s margin of victory was just under a second over Garcia and Jordan Taylor.  Gavin and Tommy Milner were third across the line in the second Corvette, but they ran into problems after the race.

In post-race inspection, IMSA officials determined that the rear diffuser on the No. 4 Chevrolet Corvette C8.R was out of spec.  As a result, the team was moved to the rear of the class.  Previous to this, Garcia and Jordan Taylor would have taken a 30-point lead to Sebring.  The No. 4 moving to the rear of the class means that Garcia and Jordan Taylor have now clinched the GT Le Mans class championship for 2020.

GT Daytona was dominated by Meyer Shank Racing with Curb-Agajanian Sunday.  Matt McMurry won the pole Sunday morning and once the green came out, he simply pulled away from the rest of the class.

The only team that was realistically able to keep pace with the AutoNation-sponsored Acura NSX GT3 was the Turner Motorsport BMW of Bill Auberlen and Robby Foley.  Foley did well early on to stay within five seconds of McMurry.  Everyone else was more than 20 seconds back by halfway.

The late caution brought Auberlen right up to the back of Mario Farnbacher in the Acura.  For the first couple of laps after the restart, Auberlen was able to keep pace with Farnbacher.  Then, slowly but surely, Farnbacher began to pull away.  Meanwhile, Auberlen had to deal with a charging Alvaro Parente in the Heinricher Racing with MSR Curb-Agajanian Acura.

Farnbacher was able to pull away to take a dominant victory, his and McMurry’s second win of the year.  The victory also gives the duo the points lead.

The margin of victory was 10.119 seconds over Auberlen and Foley.  Parente and Misha Goikhberg were third, followed by The Heart of Racing’s Roman DeAngelis and Ian James in the sole Aston Martin.  GRT Magnus’ Andy Lally and John Potter charged from 10th on the grid in class to finish fifth.

There is but one race remaining for the IMSA WeatherTech SportsCar Championship.  That is the Mobil 1 12 Hours of Sebring presented by Advance Auto Parts.  That race is scheduled for Nov. 14 at 10 a.m. ET.