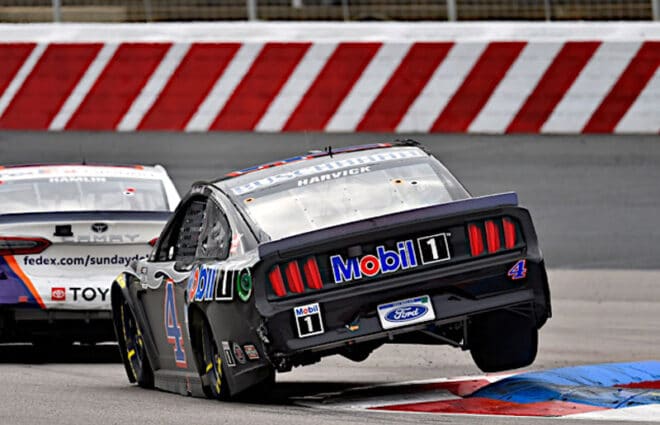 And yet somehow despite it all, this week we find ourselves looking down the barrel of the three touring series season finales to be run at Phoenix. Weather permitting, of course. Mother Nature gave us all a crash course in what becomes of the best laid plans of mice and men with the 96 Hours of Texas last week. Yet as it stands right now, not only will those three touring series host their season finales, they will be hosted on the same dates scheduled prior to the pandemic despite a challenging year full of unwelcome surprises way back when adults only wore masks on Halloween.

How is such a thing possible in a world suddenly turned on its ear? Not to overstate the hard work here, but as we learned during World War II, sometimes ordinary people do extraordinary things under extraordinary circumstances.

There were times this year I wouldn’t have thought it possible, but right on schedule with a very displeasing sneezing and wheezing, NASCAR’s 2020 calliope is set to fall to the ground blinding us with its light next weekend.

For all that went right to get us to this point, NASCAR’s method of crowning champions remains so fundamentally flawed as to approach a level of ridiculousness that makes my head spin.

The stick and ball sports all have their own methods of crowning a champion at the end of the season. Brian France even hinted at what he wanted in NASCAR’s new and unloved title-deciding process. He was after “Game 7” moments similar to baseball’s World Series. In the World Series, the team that wins the best of seven tournament claims the title whether it’s in four games or seven. The NBA and the NHL use similar tournaments to select a champion. Among top-drawer sports, the NFL is the only other one to decide a champion based on a single event, in this case the all-singing, all-dancing Super Bowl. (Naturally, teams have to survive the playoffs to grab one of those two golden tickets to the Big Show, and every year the playoffs seem to grow longer.) In football, the two teams that play the big game often have not squared off during the regular season.

Here’s where stock car racing is different. There are currently 36 points races in a season. There are currently somewhere around 38-40 teams that at least on paper are vying for the yearlong championship, at least when they arrive at Daytona for the 500-miler. In the Daytona 500 and every other event, every team competes against all the other 39 teams.

It once was the driver who averages the best finish amongst the full field was necessarily the regular-season champion. With the advent of stage racing (and a pox upon that gimmick), bonus points awards for how a driver is running at approximately the 1/3 and 2/3 breaks in the race (it can vary rather widely week to week) make it entirely possible that a driver who ran up front during the first stages of the race before fading to a 10th-place finish at the end of the event will accrue more points than the actual race winner. Please don’t talk to me about “playoff points.” That’s NASCAR code for “magic fairly dust” as I see it. Go ask Alice.

In the late May race at Charlotte, race winner Chase Elliott scored 49 points while third-place Ryan Blaney scored 52. Blaney had scored 20 points by winning the first two stages of the race. Elliott had scored one point in the first stage and seven points in the second. Yet somehow they still allowed the scallywag to exit the track with the big trophy. Sixth-place Joey Logano matched Elliott’s 49 points in a statistical quirk.

Kevin Harvick won those nine races this year. Kyle Busch won only one (so far) after crashing from the playoffs. One of those races Harvick won was at Atlanta in June. Harvick earned 51 points for that win. Busch got 52 points for finishing second, and he didn’t win either of the stages either. It’s madness I tell you, sheer madness.

Earlier in the season, Logano earned 52 points for winning Las Vegas while Harvick got 54 points for finishing second.

With four stages rather than the typical three in the World 600, Elliott got 49 points for finishing second while race winner Brad Keselowski got just 44 for winning the race.

Kansas a few weeks ago again highlighted the points disparity in modern Cup racing. Logano got 42 points for his win while second-place Harvick got 48 points, third-place finisher Alex Bowman got 46, Keselowski earned 47 for his fourth-place finish and Elliott got 47 for his sixth-place result.

To the best of my knowledge, the NFL doesn’t award extra points to a team that is leading at the end of the first quarter, at halftime or the end of the third quarter to spice the game up and keep the scores closer. I could write everything I know about football on the head of a pin with a ballpoint pen or a can of spray paint. But last I heard they don’t make field goals suddenly worth five points in the second half of the contest to help keep things interesting.

As I write this Saturday afternoon in my office (with my gauze mask ready at hand in case I am disturbed by another one of those pushy “can we count on your vote?” Moonie zealots … a hazard of living n a key swing state), Harvick has won nine points races this season. Who is even close to Harvick’s stellar mark? Even after being eliminated, Harvick has won 25% of this year’s points races. Hamlin with seven wins is the only driver to keep Harvick honest. If one of those two drivers does not win this year’s title, I will consider the titleholder to be an illegitimate champion. The fact Harvick won’t even have a chance to compete for that title is a travesty.

That travesty has a lot to do with NASCAR and its dark network overlords. Recall at Texas two weeks ago the forecast called for only a 6% chance of rain. But I am 100% certain it was raining when NBC, desperate not to lose the time slot, insisted that the green flag fly anyway despite every driver to a man insisting the track was too wet to race or at least to race safely. Harvick wasn’t the only victim of racing on a wet track, but he was the highest-profile one and the victim with the most on the line. Recall he had won the last three fall races at TMS, and in 36 Cup starts at the track his average finish was 10.4. Recall also the traveling circus ended up stuck in Texas for four days despite the premature attempt at starting the race. On lap 30, Harvick slid up the rain-slick track and walled his Ford. The No. 4 team was able to continue but posted a 16th-place result. After the event, the team admitted as bent-up as the chassis of that car was, even a 16th-place finish was a miracle. Had it not been for that lap 30 mishap, Harvick would almost certainly not ended up scrapping for a single additional point to make the playoffs at Martinsville to advance to the final four. I seem to recall after the “Spin-gate” fiasco at Richmond in 2013 they found a way to get Jeff Gordon into the playoffs anyway.

No, I can’t say where Harvick would have finished at Texas absent the lap 30 incident, but considering NASCAR blew the call so badly, I think they should have offered Harvick and the No. 4 team a mulligan and opened a fifth slot to compete for the title at Phoenix.

Back to football (momentarily I promise): Last I checked, a team’s regular-season games amount to 16 contests. A team that wins only four of those games, 25%, is unlikely to make it into the playoffs, much less make the Super Bowl. But again to stress my point, and I do have one here, Harvick has won nine times this year, beating every other driver and team in the field all nine times. That’s damned impressive.

I believe the highest winning percentage in NASCAR Cup racing ever was way back in 1967. Richard Petty won 27 of 49 races that year. Recall that back then the two 125-mile qualifier races at Daytona were separate points-paying events, so the maximum amount of races any driver could run was 48. That gave Petty a 56% winning average. Petty in fact also had a total of 40 top-five finishes that same year. In 1998, Gordon won 13 of 34 races, or 38% of the races he ran. Impressive but well short of the King’s mark.

Frankly, the current championship points system is such a mess it just needs to be scrapped, not modified. A top NASCAR official said this week that the reason the bonus points don’t follow a driver into the final round of the playoffs is because NASCAR wants the system to be simple enough that even the most casual fan in the grandstands or watching at home needn’t do any math. There are four drivers who are eligible for the championship. Whichever one of them has the best finish takes the title. Simple. Unless of course someone gets disqualified in post-race tech.

I’d suggest an even simpler title-deciding format. At the end of the season, whichever driver has scored the most wins in points-paying races is the champion. Ties are decided by second-place finishes, etc.

Yes, very likely the title would be decided prior to the season finale. That happened a lot under the old points system. And as it turned out, once a driver had clinched the title, the quality of the racing improved dramatically. Drivers were no longer gunning for points. They were racing wide open for wins, not trying to stay out of trouble when quarters got tight.

If a driver had six wins going into the traditional stretch drive that kicked off with the Southern 500 at Darlington Labor Day weekend, there’d likely be only one or two drivers who had a mathematical chance to best his tally of wins that season. And they’d have that chance only if they won a bunch of races in a row, which would provide plenty of those Game 7 moments.

If you hate that idea, and likely some of you will, relax. There’s not a chance in hell NASCAR will embrace the “most wins” system. So for yet another year it’s time to fade to black.

As Bob Seger once wrote,

Matt joined Frontstretch in 2007 after a decade of race-writing, paired with the first generation of racing internet sites like RaceComm and Racing One. Now semi-retired, he submits occasional special features while his retrospectives on drivers like Alan Kulwicki, Davey Allison, and other fallen NASCAR legends pop up every summer on Frontstretch. A motorcycle nut, look for the closest open road near you and you can catch him on the Harley during those bright, summer days in his beloved Pennsylvania.
Previous Jack Wood Running ARCA Showdown, East With GMS Racing in 2021
Next The Underdog House: Ty Dillon Survives Spooky Weekend at Martinsville