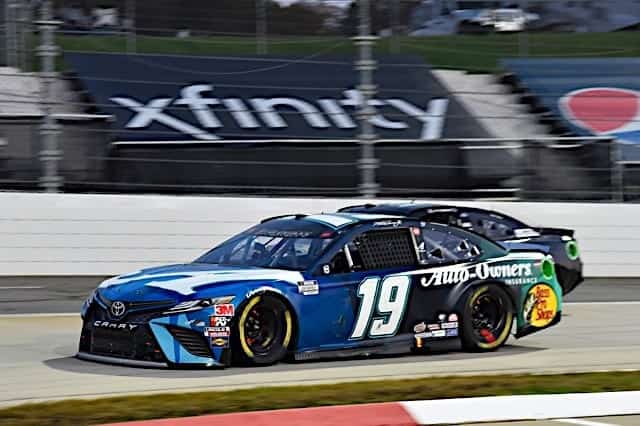 For the most part last weekend, it was dry in Martinsville (Sunday morning being the exception). Thankfully, that meant that everything got in on time. It was also cutoff weekend, which brought problems in its own right.

Sunday brought the NASCAR Cup Series back to Martinsville for their second visit of the year. Everything was on the line and some unexpected stuff went down.

Pre-race coverage was rather rushed, but I knew that it was going to be like that going in. They only had a half-hour for Countdown to Green (in practice, it was more like 25 minutes) and the close confines of Martinsville means that the drivers weren’t really inside of the track for long before the race started. The only driver that viewers got to hear from prior to the race was Chase Elliott, who just so happened to win the whole thing.

If there is one aspect that encapsulates Sunday’s broadcast, it is a complete domination by all things having to do with the playoffs. In all honesty, I don’t care what time of year it is. Show me everything that is important. I don’t want the playoffs to determine everything that I see. I felt that that was the case for the vast majority of the race. It was irritating at times.

For example, Michael McDowell was smoking heavily 10 laps into the race Sunday with a massive tire rub. This came via significant contact with Jimmie Johnson, which we saw via replay. He ends up driving around until his left-rear fender cuts his tire and forces him to stop. His day goes in the toilet right here. The flat would have been bad enough, but given what we know from how Kevin Harvick’s day turned out and Front Row Motorsports’ prior performances at Martinsville, he might have still gotten a decent finish.

Instead, he shot himself in the foot and got busted for a commitment line violation when he made his first stop, then got caught speeding while serving his pass-through penalty. I don’t recall this ever getting referenced on the broadcast. Even if it only got the quick treatment on-air (some kind of quip from Dale Earnhardt Jr. or Jeff Burton along the lines of “Dang, Michael just can’t buy a break here!”), it would have been more than he got. When it was all said and done, McDowell ended up five laps down. While he did make up a couple of laps and ended up finishing 28th, the whole affair ruined his day.

Given how the first two races of the weekend went in Martinsville, I would have liked to hear more about how the tires were doing. One of the big topics entering the day was that there was a lot of tire wear. Part of that is the fact that it was in the 40s Friday night during the truck race, but the Xfinity race saw teams dealing with cords showing at times. The combination of NASCAR having a hard time getting rubber to lay down (which is darn near every time they race at Martinsville) combined with Sunday morning rain would have normally made it a story.

In practice, it was only a thing when driver cut tires. Left-rear tires, in particular. If you’re cutting that tire, more than likely, it’s because of contact. In Harvick’s case, NBC traced his tire failure to contact with Matt Kenseth. Martinsville used to have a plague of right-front tire failures due to melted beads. We didn’t have much of that all weekend. The only flat right-front tire of the weekend sent Bayley Currey into the wall on Saturday.

I’m not sure what tire wear really looked like Sunday. Viewers never really saw any tires off the cars unless they were cut. Since NASCAR doesn’t run interliners at short tracks, you can’t tell much about them because they get shredded to heck.

Speaking of Harvick, he got a lot of coverage because of his various problems on Sunday. First, the coverage was based around his handling difficulties, then it was the cut tire on lap 182. That was every bit of the big deal that it was. Says a lot that it took him to lap 400 to get back on the lead lap, even with a quick wave-around 20 laps after his stop. It was only in the last quarter of the race that the Stewart-Haas Racing team finally got the No. 4 car up to snuff to compete.

Yes, Harvick tried to intentionally wreck Kyle Busch on the final lap to get into the Championship 4. I don’t condone that trash, but I understand why he did it. I’m happy that he failed and got his just desserts.

Post-race coverage was somewhat limited as the race ended a few minutes later than expected. Viewers only got a couple of driver interviews on NBC before the broadcast switched over to NBCSN. Those were with Elliott and Harvick. On NBCSN, viewers got a few more interviews.

Normally, post-race coverage before the championship race has comments from all of the drivers still eligible for the title. That wasn’t the case here because we never heard from Joey Logano. I suppose that’s because he was the only driver that was already locked in before Martinsville. Luckily, NBC did speak to Logano after the race and that interview is available at NBCSports.com.

Almost none of the post-race discussion pertained to Martinsville at all. That’s probably the most infuriating part. The race doesn’t even matter. It’s just a means to an end. That’s especially knowing that Martin Truex Jr. fell victim to a loose wheel that forced him to pit out of the top five late. Truex did talk after the race, but not on NBCSN. I wish NBC could have gotten a look at that tire. Instead, Truex’s stop was treated like an afterthought even though he’d led 129 laps to that point.

I’ve never claimed to be a fan of late-season races. They tend to be so focused on one single topic (the points) that you miss so much stuff. Yes, Corey LaJoie got some dap for getting himself into the top 15 on merit. Then, he proceeded to pull a Rusty Wallace and jump the restart from the lead. That always works well.

All I ask with these races is that the playoffs should not significantly change how the event is covered. That wasn’t the case on Sunday, and I’m probably not going to be pleased with how next weekend will be covered.

The Xfinity Series made their first visit to Martinsville since 2006 on Saturday. Back then, that weekend was marked by a TV-related change that moved the race from Saturday night on TNT to Saturday afternoon on NBC (the original plan was to bring in temporary lighting in order to run the race at night).

Saturday’s Draft Top 250 was also on NBC, but not without some compromises. For example, there was no pre-race programming at all. NBC started their coverage at 3:30 p.m. ET after the national anthem had already been complete. Four minutes later, we had the command.

The race was given a 150-minute time slot on NBC. The race ended with about two minutes to spare. As a result, there was next to no post-race coverage. Viewers saw Jeff Burton interview his son Harrison on the radio while Harrison was doing his burnout. Given that this was a father and son moment, it was quite momentous. Problem is, you couldn’t hear part of it since Harrison was burning it down, as is his right as race winner.

That said, the ongoing insanity that is COVID-19 has resulted in a glut of major events all taking place at nearly the same time. NBC couldn’t allow for on-air time for a pre-race show.

Think of it like this. The weekend of Nov. 13-15 in sports car racing has the season finales for the IMSA WeatherTech SportsCar Championship, the FIA World Endurance Championship and the GT World Challenge Europe powered by AWS Endurance Cup. This is effectively a sports car racing perfect storm (the first two are racing at the same time, believe it or not), forcing teams to make alternate plans because of conflicts. That’s effectively what last weekend looked like for NBC with racing, rugby and Premier League action.

This past weekend once again showed the difference between Cup and Xfinity broadcasts on NBC/NBCSN from on-site and Gander RV & Outdoors Truck Series broadcasts on FOX Sports 1 that are still being done remotely. Martinsville is a small enough venue that the commentators can point things out in progress. It’s always guesswork as to what happened if you don’t see it happen in real time. For instance, when Ryan Preece spun out Sunday, Earnhardt Jr. was able to see that it was coming because Preece and John Hunter Nemechek were giving each other the business.

Even with 10 cautions on Saturday, this was probably the cleanest of the three races. There was no blatant intentional wrecking here and the race ended with a short run, but more than 10 laps.

There was a playoff focus on Saturday’s broadcast, but it was nowhere near as substantial as what we got on Sunday. I could still follow the race at large. There were still decent battles shown that didn’t necessarily have playoff implications.

That said, it was difficult at times to follow drivers as they moved up (or down) through the field. AJ Allmendinger was one of the best drivers on Saturday. Through the draw, he ended up starting 36th and put himself in the conversation for potentially winning the dang thing. Then, he cut a tire and lost a couple of laps.

That’s all for this week. Next weekend is Championship Weekend for NASCAR at Phoenix Raceway. Personally, I don’t think this is the right choice of venue to decide the championship, but I can’t do anything about that. Homestead was just about perfect, but NASCAR decided that they wanted to make a change.

It is a quadruple-header as the Gander RV & Outdoors Truck Series wraps up Friday night, followed by both the ARCA Menards Series West and Xfinity Series on Sunday. Finally, you have the Cup finale Sunday. Should be interesting.

We’ll have critiques from Phoenix in next week’s edition of Couch Potato Tuesday here on Frontstretch. Later this week, we’ll have a look at Friday night’s broadcast of the NASCAR Hall of Fame 200 in the Critic’s Annex.

So tired of havein coverage all about the ‘playoff’ from day 1.

NASCAR playoff suck, team orders suck, that is why no one watches anymore, i will not waste my time watching next week after the BS NASCAR puled this week, and the dummys at NASCAR don’t understand why ratings are so low,