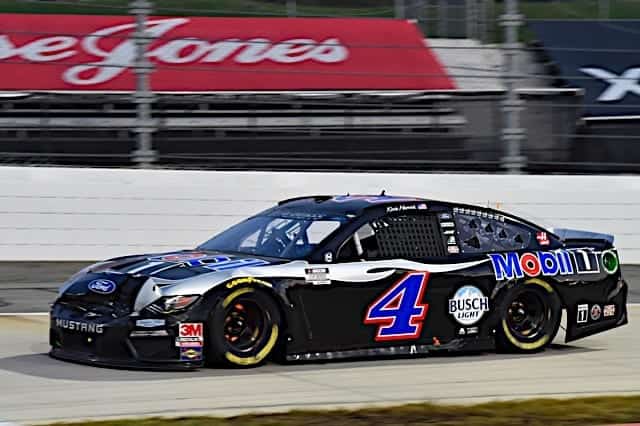 Martinsville Speedway has been hyped from the moment it became the cutoff race NASCAR’s Round of 8 in all three national touring series. Beginning in 2020, the track determined the Championship 4 for Phoenix Raceway’s season finale. But could the paperclip-shaped oval live up to those lofty expectations?

The answer we got was yes, three times… and then some.

All the races this weekend at Martinsville were compelling. In particular, the NASCAR Cup and Gander RV & Outdoors Truck series events stood out. Why? Each division’s respective regular season champion wound up bounced from the playoffs. Who would have thought that was going to happen, especially in the case of Kevin Harvick? A nine-win season was reduced to rubble despite a last-ditch effort to spin Kyle Busch on the final lap.

Trucks, meanwhile, suffered from disrespectful driving. As bizarre as 2020 has been without practice and qualifying, the lower two series have been affected the most. Young drivers learning on the fly have led to mistakes and torn-up equipment that’s left tempers flaring. Through it all, the drama raged on like a five-alarm fire, keeping fans on the edge of their seats for three days straight.

Martinsville… well done. Whenever a solid, entertaining weekend of racing happens at a track, the viewers want to bottle that up and have that same feeling the following season. Let’s hope this place stays in the championship cutoff race for years to come.

Now, time for a closer look at some meaningful stats from the weekend.

Considering how Kevin Harvick’s 2020 season has gone, would anyone in their right mind believe the No. 4 team was going to miss out on the Championship 4? Hell, I wouldn’t even consider that question credible entering the 2020 Round of 8.

What a horrible Halloween weekend dream that came true.

Harvick kicked off the round with a runner-up finish to Joey Logano at Kansas Speedway (man, doesn’t he wish he could have found a way around the No. 22 car now). The No. 4 team was then leading at Texas Motor Speedway last Sunday (Oct. 25) when, on lap 29, he pancaked the wall after slipping in what he believed was a damp racetrack. Less than 20 laps later, the caution waved for rain and the race was red-flagged for three days.

Harvick rebounded to finish 16th… but the damage was done.

Despite his Texas struggles, Harvick entered the cutoff race at Martinsville with a 41-point cushion over the cutline, +15 and +17 on Denny Hamlin and Brad Keselowski, respectively. As long as the No. 4 team had an average race at the paperclip, he’d cruise into the Championship 4 at Phoenix.

But Martinsville was by far Harvick’s worst performance of the season. He missed out on stage points and ran into Matt Kenseth, cutting down a left rear tire. Two laps off the pace at one point, Harvick’s championship hopes looked like they might be over. He spent much of the second half of the race one lap down and change, sitting well outside the top 20.

Finally, with 99 laps to go, the No. 4 got its second lap back. Suddenly, Harvick had a fighting chance to advance, though it would’ve been better for him without a driver below the cutline winning the race.

Chase Elliott didn’t let that happen, as he went on to win the race, securing a spot for Phoenix. Keselowski, who had a late speeding penalty, rebounded to finish fourth, pushing ahead of Harvick in traffic. That left him one point behind Hamlin on points. Going into the final lap, Harvick knew the stakes. So he made a desperate, banzai move off turn 4, turned Kyle Busch and went around himself.

It didn’t work. So the nine-time winner this season, who also leads the series with 20 top-five and 26 top-10 finishes, was eliminated from title contention.

By far, this upset is the biggest since NASCAR added playoff points to the format in 2017. You could date back to 2014 and still call this the biggest upset under the 16-driver system, although Harvick has missed titles while being the fastest car for the duration of the year (2015, 2018).

How good has Harvick been this season? Thanks to my colleague Phil Allaway tracking season-long point standings under just about every format possible, Harvick would have a points lead of 110 without the playoff reset. In fact, he would have clinched the championship on Wednesday at Texas! Under the pre-stage format between 2004 and 2013, he would have a 94-point advantage and clinched the title at Martinsville. Remember the season-long format until 2003 where Kenseth’s one-win championship season led to the playoffs? Harvick would have also won the championship on Sunday by 297 points.

Instead, arguably Harvick’s best season of his 20-year career is stopped short of battling for a championship. It’s just the second time since 2014 he hasn’t been able to advance to the final round (2016). He’s just the fifth driver in Cup history to win at least nine races in a season and finish no better than fifth in points. Note most of them didn’t run the full season (Junior Johnson, 1965; Bobby Issac, 1969 (ran entire schedule); David Pearson, 1973 & 1976).

Anyone in their right mind knows Harvick’s No. 4 team is among the best four on a given weekend, especially in 2020. But whether one likes it or not, that does not matter under NASCAR’s current points system. Either way, Harvick would tell you he’d rather “win races and do what we did” than having it all come down to one race, winner-take-all for the title.

"I'd rather go through the year, win races and do what we did" @KevinHarvick tells reporters on a Zoom call. #NASCAR

Through the opening 10 races of the 2020 Xfinity season, Harrison Burton looked to be a serious threat for the championship, scoring two wins and a rookie-record 10 consecutive top-10 finishes to start his first season on tour. So much for people criticizing the Joe Gibbs Racing lineup.

But then inconsistency struck the No. 20 team. It took Burton 21 additional races (through his victory last weekend at Texas Motor Speedway) to score 10 more top 10s. Not stellar for an Xfinity Goliath.

Sure, some of that instability was self-inflicted but some of it was not. Remember what happened in the second race of a doubleheader weekend at Kentucky Speedway in early July? Noah Gragson drove through the No. 20 Toyota late in the event, leading to a post-race grapple. Burton also had a loose wheel at the inaugural race on the Indianapolis Motor Speedway road course that gave him a 25th-place finish. That came after consecutive DNFs at Talladega Superspeedway and Pocono Raceway. His most recent DNF came at the Charlotte Motor Speedway ROVAL when Burton broke a transmission, ending any shot he had at a championship in 2020.

Boy, does Burton wish he could have that race back.

In the Round of 8, Burton finished a mediocre 11th at Kansas Speedway but followed that up with a victory. Over the weekend, he led 81 laps, trying his career-high for a single race, en route to another win.

Look, when you’re driving in Xfinity for JGR, all eyes are on you with the team’s history of success. By winning consecutive races toward the end of his rookie campaign, expect Burton, a four-time winner this year, to have loads of confidence entering 2021.

Unless something bizarre happened in Friday’s Gander RV & Outdoors Truck Series race, Austin Hill was going to ease into the championship race at Phoenix.

Instead? We got a same song, different verse (see Harvick above).

Hill lined up third for the start of the NASCAR Hall of Fame 200. As soon as the green flag waved, the No. 16 Toyota began to slide back through the field, quickly seeing any stage points in the opening stage vanish. Race leader Sheldon Creed was setting such a tearing pace, Hill was off the lead lap 50 laps into the race, believing he had a flat left rear tire.

Instead, Hill fought engine woes, coming up 83 laps short of the finish. Still, the regular season champion had a shot. He needed a driver in the back half of the top eight not to win and either Zane Smith or Matt Crafton not accumulate enough points to make up their respective 15 and 27-point deficit to the No. 16 truck entering the race.

Come lap 200, Grant Enfinger, who entered the race eighth on the playoff grid, found himself in victory lane. That secured the Thorsport Racing driver an automatic spot to Phoenix. Meanwhile, Smith and Crafton both finished inside the top five with the edge going to the rookie driver. Their success meant Hill was left on the outside looking in by 21 points.

Yes, a 48-point swing happened via Enfinger’s win and Hill’s engine expiring. It also means it’s the third time in five Truck playoffs that the regular season champion failed to compete for a championship in the final race of the season (William Byron, 2016; Enfinger, 2019). Surely, those additional 15 playoff points should matter, right? Then why, 60 percent of the time, the best driver in the regular season hasn’t even had a shot in the season finale?

Well NASCAR has been robbing Peter to pay Paul regarding the whole system. Not saying there were not legit winners. One I can think of finally deserved what they were denied via various forces for at least a couple of times, one other via a faulty jack at a critical moment. Game over. Then they got it, cleanly and dominantly and children still howled! And now people are outraged? Yeah, o.k. whatever! What are you gonna do about it NOW????????????????????????????