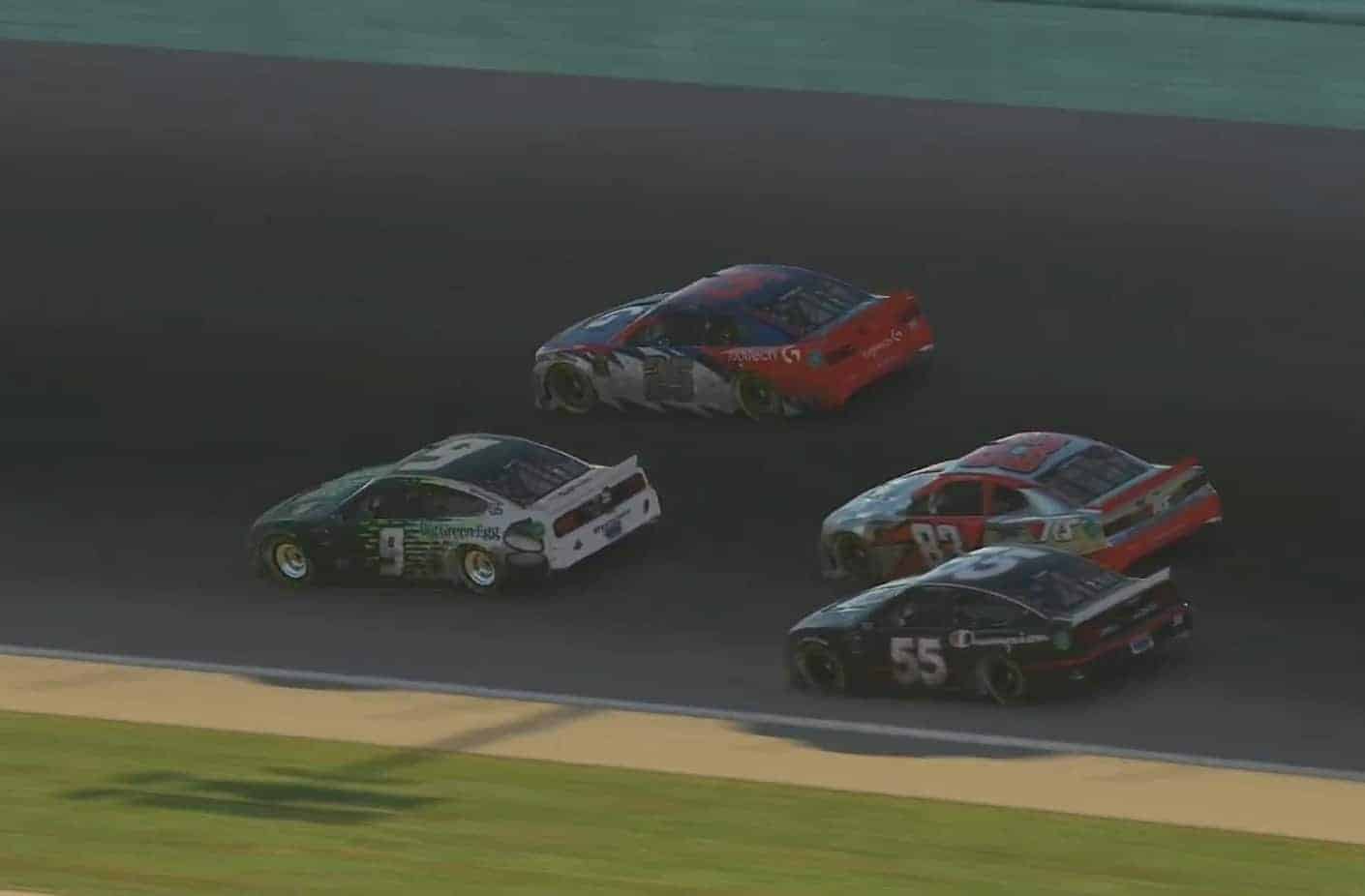 The 2020 eNASCAR Coca-Cola iRacing Series season concluded at Homestead-Miami Speedway on Monday night, Nov. 2, in dramatic fashion. It took three overtimes, but in the end Nick Ottinger claimed the championship.

A late-race caution allowed the William Byron Esports driver to pit for fresh tires. He quickly moved through the field on each ensuing restart, and finally passed Bobby Zalenski for fourth in the final two laps.

“I got the best dang team owner there is in William [Byron],” Ottinger said. “He’s believed in me from day one. 2020’s definitely been a weird year for a lot of people. There were a lot of preparation challenges this week. I didn’t have power or internet for three days in a row, and I actually went to one of my buddy’s houses last night and tried to race. … It’s just a huge amount of challenges to overcome. It’s just like how our race went.”

Ottinger didn’t seem too daunted by the chances of success for the final pit strategy near the end of the race.

“It’s never over, and the strategy call, it was a 50-50 shot. You don’t look too smart if a caution doesn’t come out, and we just took the biggest risk you could. Me and the 8 [Michael Conti] were on the same deal there, and you know, it just worked out.”

OMG WE ARE CHAMPIONS!!! So overwhelmed with emotion still. Worked so hard this year with my @WBeSports_ team to get to this opportunity and we never quit after being on the outside looking in. Was some of the best restarts I have had in my sim-racing career late tonight!

While Ottinger won the $100,000 prize, Chris Shearburn went on to win the race after taking the lead on the next-to-last restart.

“It’s been a long time coming,” Shearburn told the broadcast after the race. “I’ve felt like I’ve let a lot of wins slip through the fingers, especially this year. The luck certainly hasn’t been on my side. But for once, for one time, I finally caught a break in traffic there on the first restart, which probably allowed me to get the win more than anything. It feels great, it’s amazing.”

Chris Overland came in second, Eric Smith was third, Ottinger fourth and Caine Cook rounded out the top five. However, Overland and Smith did not earn enough points to move up into the top 20 in points and will compete in the Road to Pro Series over the offseason.

The race was relatively clean for much of the first half, and the four championship drivers went on different pit strategies under green. Ottinger pitted well before the other contenders, while Zalenski and Ryan Luza got service on lap 51. Michael Conti and Ray Alfalla came down later on lap 65.

Luza had a fast car all night, going back to first within the next 10 laps. He needed some fresher tires, though, so he came back down just before the caution came out.

Luza was able to maintain his position up front, taking the lead shortly after the restart. Zalenski then got drafting help to get to the point with 33 laps to go, but then another caution flag would wave involving Jarl Teien. Conti narrowly avoided the spinning No. 66 car, but kept going without harm.

And, as often is the case, cautions bred cautions. Luza and Zalenski decided to pit for his final set of tires under this yellow, while Conti and Ottinger stayed out. The Williams Esports and WBE drivers moved up within the final 20 laps, with Zalenski out in the lead. Luza was gaining ground and made some slight contact with Alfalla for the second spot, causing Alfalla to get out of the racing groove.

Luza then had his sights set on Zalenski, passing him within the last few laps. As Zalenski came up on the outside to try to return the favor, Luza made what appeared to be a late block and got turned, hitting the outside wall. Luza had too much damage to contend anymore; he finished a disappointing 31st.

Did that just happen?!?!

Title rivals @RyanLuza and @bobbyzalenski collide with 4 laps to go.

This set off the first of three two-lap battles, allowing Ottinger to work his way through the field on newer tires. The final caution came out for a big wreck involving Matt Bussa and Brandon Kettelle.

BIG WRECK IN THE BACK! @BrandonKettelle UP AND OVER!

Zalenski couldn’t hold off his competition any longer, and Ottinger easily passed him to take the championship.

The move that made it happen!

Here are the results from Homestead:

The 2019 champion, Zack Novak, had a rough year and was the first one out of the top 20 (unofficially). He’ll likely be relegated to run the Road to Pro Series and will need to finish in the top 20 in points there in order to return to the eNASCAR Coca-Cola iRacing Series next season.