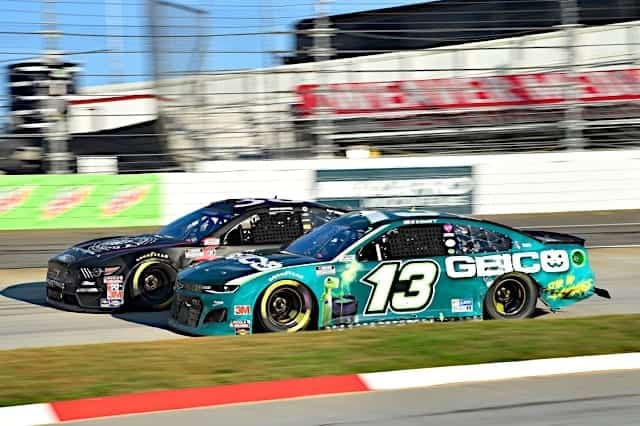 Ty Dillon was the highest-finishing NASCAR Cup Series underdog in Sunday’s (Nov. 1) Xfinity 500. Adorned with a “GEICOween” paint scheme, Dillon drove the No. 13 Chevrolet to 16th after starting 25th.

Dillon had an up and down day in Germain Racing’s final trip to Martinsville Speedway. An ill-handling car prevented him from moving up in the first fifth portion of the race. However, his crew chief told him to stay out while others pitted on lap 135, bringing him up inside the top 10. The car would continue to fight against Dillon all through the day and he dropped back. His car eventually came back to life, and he gained 13 positions in 30 laps.

All of the team’s hard work suffered near the end, though. Dillon had to return to pit road on lap 444 so his crew could tighten some lugnuts on a tire. Still, it was a valiant effort for the single-car team.

“I had a lot of fun behind the wheel today,” Dillon said after the race. “To finish 16th is a great way to end our final Martinsville start together as a team.”

Though there weren’t any other underdogs in the top 20, I have to give a shout out to Corey LaJoie and Go Fas Racing. He stayed out when others pitted during the last caution, leading the field to green. Unfortunately, LaJoie had a restart violation and had to serve his penalty. He finished 25th.

The Xfinity Series’ event at the paperclip-shaped track saw multiple dogs shining throughout the race. Though Ryan Sieg missed out on moving to the final four, he still ended in a respectable 11th-place. Brett Moffitt was 13th, JJ Yeley was 14th after leading five laps in the No. 17 car of Rick Ware Racing, and Jeremy Clements placed 15th.

The Gander RV & Outdoors Trucks took to Martinsville Friday night, and boy, was it wild. In the end, Danny Bohn took his No. 30 On Point Motorsports truck to seventh, his first top 10 of the season and second of his career. Austin Wayne Self ended ninth and Derek Kraus took home 10th. Trevor Bayne was 11th in Niece Motorsports’ No. 45 entry. Carson Hocevar, Timmy Hill and Spencer Boyd finished 13th-15th, respectively.

After a tumultuous year, all three national series host their season finales this weekend at Phoenix Raceway. In Cup, look for Dillon and Michael McDowell to again earn top-20 finishes at the 1-mile track.

Then in NXS, Sieg and Brandon Brown ended 11th and 12th earlier this year. Both could be the top dog in this race as well.

Finally, in Trucks, Niece Motorsports drivers Bayne, Ryan Truex and Boyd should all earn top 15s. Truex finished ninth in his first truck start at Phoenix. Also, Self could build on his 19th and 18th place results in the past couple of years.

Our Ford Mustang was fast all race long, just unfortunate circumstances early on that put us behind.

New leader, the @KeenParts Ford! Hey, it’s our last race with them (for awhile at least!) so might as well put it up front huh?

P15 at Martinsville Speedway in the #20 @PlanBSales Chevy!

?? Thank you guys for all the support, it was great to get a good run with 500 names on the truck and so many of those names being in the military. ??

Top 15 lead lap at the ?! pic.twitter.com/koleUIcd4U

I’m so incredibly thankful for the way that Jesus loves us all! His presence was so undeniable Thursday, October 29th when Kapton Reed Dillon was born.

Welcome to the world sweet boy. I can’t wait to see the amazing things you do in this life and it’s honor to be your dad! pic.twitter.com/J2zYkGygCZ