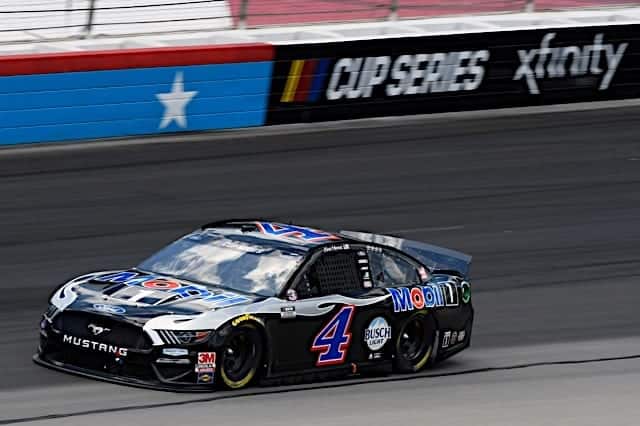 Did You Notice? … As if the 2020 NASCAR Cup Series season (and 2020 as a whole) hadn’t been chaotic enough and there wasn’t enough around the corner with the season finale at Phoenix Raceway, Sunday’s (Nov. 1) race at Martinsville Speedway injected a dose of adrenaline into the season and its playoffs.

Let’s start with the winner. Chase Elliott was 25 points below the cutline as the haulers headed to Virginia for the penultimate race of a bizarre season. Tied with Hendrick Motorsports teammate Alex Bowman, Elliott needed to have a very good race to make the Championship 4 and have a shot at his first Cup title.

Elliott ended up leading a race-high 236 laps. He suffered a scare with roughly 100 laps to go when his jackman vaulted over the pit wall too soon – realizing his mistake, the crew member reversed course in time to (eventually) avoid a penalty for the No. 9 team. NASCAR initially handed out a sentence for the infraction, but rescinded it after taking a closer look.

This put Elliott back in position, and he hounded Martin Truex Jr. for the lead, eventually scooting around the No. 19 for the top spot. Truex had to pit a few laps later for a loose wheel, while Elliott led the final 44 laps en route to his fourth win of the season.

The clutch victory locked Elliott into the final round with a shot at the title, but he’ll be joined by three other drivers.

One of those is Denny Hamlin, who, after a seven-win season, had mostly cruised through the playoffs. Despite mediocre runs at both Kansas Speedway and Texas Motor Speedway, the No. 11 team was 27 points to the good upon arriving in his home state. He seemed strong early and even led 42 laps, but admitted after the race that his car began to fade as night fell on Martinsville.

Pitting twice during a cycle to tighten lug nuts didn’t help his case, and Hamlin found himself teetering on the precipice of elimination with the laps ticking down.

To flash back in time for a moment, Hamlin was in a must-win situation in the penultimate race last season at Phoenix. He won that race outright to lock himself into the final round, one of the more clutch wins that year.

Hamlin didn’t necessarily need to win at Martinsville, but tinges of desperation had to be setting in amongst driver and crew as another very middling race ended with an 11th-place run – still on the positive side as the laps wound down. But Hamlin’s fate rested entirely on a few cars elsewhere on the track.

Harvick has had one of the greatest seasons in recent memory, on paper the most consistent season since Dale Jarrett’s 1999 season. The No. 4 car has completed all but three laps ran the entire year, adding nine wins along with a series-high 20 top-five and 26 top-10 finishes to boot. In the season-long format, Harvick would have clinched the championship last week at Texas on points alone, ahead by 134 when that race ended.

With the current playoff format, it didn’t matter.

Harvick was unable to pass Joey Logano for the win at Kansas two weeks prior, which locked Logano in and filled up one of the four slots at Phoenix. The next week wasn’t kind to Harvick either, with a disappointing run at Texas after slipping in the dampness on the racetrack in the opening laps.

A few days later at Martinsville, Harvick didn’t score a single stage point, later suffering a cut tire after contact with Matt Kenseth and going two laps off the pace. Despite methodically working his way back onto the lead lap and with a tie with Hamlin in sight, the No. 4 made contact with Kyle Busch coming out of the final corner as he attempted to move the No. 18 out of the way, needing that one point.

Busch indeed spun, but Harvick took himself out as he went spinning and lost several more spots mere feet from the start/finish line.

When the smoke cleared, Elliott locked in the second of four spots at Phoenix with the win, which left only two to play for. Hamlin and Brad Keselowski squeaked in with few points to spare, and Harvick – after an all-timer of a season – was on the outside looking in.

This could be the year of reckoning for the playoff format as a result.

NASCAR’s newest postseason experiment — which succeeded the original Chase setup — has been hit or miss since its inception. The elimination format is in the midst of its seventh year after beginning in 2014.

Each champion has won at least three races in their respective title-winning seasons, but at times, the championship pick has seemed clearer than others. Harvick won five races in 2014, Busch the same in both 2015 and 2019 and Truex put eight on the board in his 2017 title run.

In 2018, Logano secured the championship after a season dominated by three drivers who didn’t have the No. 22 plastered on the side of their car. Harvick and Kyle Busch each won eight races apiece, and Truex had a solid follow-up effort to his 2017 crown. But it was Logano who snuck a win at Homestead-Miami Speedway to clinch the championship.

So is the fickle, unpredictable nature of the NASCAR playoffs. Unpredictability is an inherent guarantee in almost any sport’s postseason: a Super Bowl upset, an unprecedented World Series run, an underdog making a charge at the NBA Finals or even a No. 1 seed going down in March Madness.

NASCAR’s playoffs really only entered this realm of having things hit the fan with the 2014 revamping and the elimination format. Kenseth denied Logano with a chance at a title in 2015, avenging Logano’s actions against him a few weeks prior. Logano seized the 2018 title out from the two most dominant drivers that season. Busch, having used a portion of the 2015 season to heal broken legs, reeled off win after win and made the playoffs by cracking the top 30 in points before going on to win the championship.

Other years, the season finale ends the way many expect: Truex’s and Busch’s respective titles in 2017 and 2019, along with Harvick’s 2014 crown, were all fitting in one way or another for the seasons the drivers had.

It feels very much like 2020 will be the breaking point for NASCAR’s current playoff format. Points have been raised with ideas ranging from wins counting for more playoff points, the regular season champion securing an automatic berth in the finale by that accomplishment alone and either scaling back or getting rid of the format altogether.

Again, NASCAR has faced criticism for this bracketed postseason pretty much every single year of its existence, But think about this: earlier in the season, Harvick had a theoretical shot at matching Jeff Gordon’s untouched average finish of 5.7 in 1998. Harvick is hovering just around 7.3, but his dominance this season – again, finishing more than 75% of the races in the top 10 and still with a chance to score double-digit victories – had a majority, myself included, penciling him into the championship race before the playoffs even got underway.

It wouldn’t be surprising for the sanctioning body to make some changes to the playoff format in the wake of Martinsville either. The inherent chaos that can unfold over just one race could end a dominant driver’s title hopes, as it did on Sunday.

To be fair to NASCAR as a footnote, that’s the point of the playoffs. As Hamlin mentioned in his post-race interview, if someone has two bad games in a three-game series, their dominant season could be over just like that. Surprising things happen. Harvick had a couple dismal races, things happened and the No. 4 won’t be able to compete for a title at Phoenix.

As for this weekend, Hamlin is going up against two former Team Penske champions in Logano and Keselowski, as well as a fellow title-less driver in Elliott. Each driver has won at least three races in 2020, and Hamlin hopes to end the season the way it started — with a win. Logano won at Phoenix in the spring, Hamlin there last fall. There’s history in Arizona between Hamlin and Elliott, which shouldn’t surface at all, but it bears noting.

In just over 100 hours, the 2020 NASCAR season – scary crashes, pandemic stoppages and all – will have concluded and every single person who pays attention to this sport will have a few months to process what happened this year and what’s to come (not to mention the silly season looming before us).

Adam Cheek what you should do an article on is Joe Gibbs Racing cheating, Do you know what point shaving is, That’s when basketball team members conspire together to alter the finish of a game by not giving a 100% effort in the game and it is against the law, Sunday Joe Gibbs Racing team members conspired together to alter the finish of the race by not giving a 100% effort in order to get Hamlin in the championship, Remember a lot of money was bet on Harvick to win the championship, and what Gibbs did changed all of that, NASCAR wants people to bet on races through such things as Draftkings, but if the fix is in, that is not right, Maybe this is a job for someone like the FBI. What do you think Adam Cheek

I can’t believe CRAPCAR gave Gibbs a pass on this incident. Not a Gibbs fan nor a Harvick fan. However CRAPCAR just told all the teams that not racing to win is OK in this case when the faster car could have passed Hamlin and he would have missed the “playoffs.” Wow, don’t talk to me about staged races or team orders and cheating. Money talks and BS walks doesn’t it. Can’t wait to see what they let Bubba get away with next year and how much he will be hyped by the media. Danica all over again.

That’s one of the perks for having team members. Helping their team member win if they can’t. Back in the Mercury Marine Hemi days they almost killed a driver who was competing against one of their potential Championship race cars.