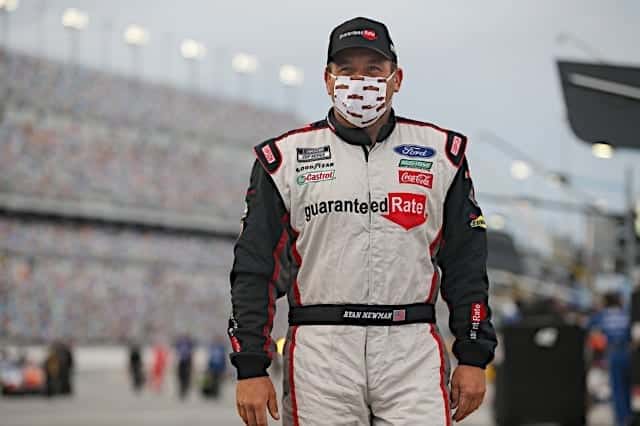 Ryan Newman‘s 2020 NASCAR season started off with a bang. With just a few hundred yards prior to the checkered flag of the Daytona 500, the No. 6 was turned into the outside wall from the lead, flipped on its lid and was hit by Corey LaJoie, sending Newman soaring through the air.

Newman finished ninth, but was transported to Halifax Medical Center in Daytona Beach, Fla., where he walked out less than 48 hours later.

The Indiana native would miss the next three weeks of action prior to the sport being shutdown due to the COVID-19 pandemic. Fortunately for Newman, he was able to to return to racing when NASCAR returned on May 17 at Darlington Raceway.

There, Newman finished a respectable 15th. Three days later, he backed up that finish with a 14th-place effort at the same racetrack. In fact, in his first seven races back, the No. 6 team scored finishes of 17th or better on six occasions.

But then the struggles began, and in his 32 starts this season, Newman has scored just two top-10 finishes. His best outing was a sixth-place result at Talladega Superspeedway in early October.

“One of my best racing performances was my first race back,” Newman recently told Frontstretch. “I think we’ve struggled with a lot of things on the racetrack since then at different places at different times.

“We’ve got a lot of work to do to play catchup at Roush Fenway [Racing], and we’re in the process of doing that.”

Newman was coming off a 2019 season in which the No. 6 team overachieved and made the playoffs, narrowly missing out on the Round of 12. He ended the season 15th in the championship standings.

For this season, much of the team has remained the same, including crew chief Scott Graves. But with NASCAR going the route of having neither practice or qualifying, the 2002 Rookie of the Year believes his performance has been hindered negatively.

“We’re [31] races in since the pandemic started, that’s like a day’s worth of practice. [Thirty-one] runs is maybe two practices, maybe three practices at the racetrack.”

Newman admits that it’s among one of his worst statistical seasons of his 19-year full-time career. Prior to this season, the fewest amount of top 10s he’d scored in a single season was seven, all the way back in 2006 with Team Penske. His average finish of 19.9 this year rivals that season, which was a disappointing 20.6. In the 14 years since then, his 2008 season was his only other season with a worse average finish than 2020 (20.3).

At the same time, Newman calls it a “catch-22” because many drivers “would love” to have the season he’s having. Nonetheless, he believes it’s staggering to see his Roush Fenway Racing team struggle as much as it has this season.

“It’s surprising, no doubt,” Newman said. “But in the end, I know why. We’re just not doing a good enough job of understanding what we need at the racetrack.”

Newman points out that his first-year teammate Chris Buescher hasn’t had a stellar season either. The No. 17 team has an average finish of 19.5, narrowly ahead of Newman’s pace. The difference is Buescher has two top-five and eight top-10 finishes.

And while Newman added it’s been fun working with Buescher this season, he admits it would have been much better had the team had the ability to work on the racecars at the track, prior to the race.

As for his subpar season, don’t question Newman’s desire or capability to drive a racecar.

“My abilities behind the wheel have not changed,” Newman stated. “I can tell you that across the board. I’m not trying to mix it up, but if you look at the results of the [No.] 17, they’re right there with mine. It’s not that [Buescher is] outperforming me.

“We’ve both had some decent runs, and we’ve both had a lot of miserable runs. We’ve got to get that fixed within the family.”

Back in 2018, it was believed Newman had signed a three-year deal with RFR. As of now, he doesn’t know what his future holds past the 2021 season.

“Don’t know. Really I don’t,” he said. “I think there are so many question marks out there right now with the Next-Gen car, racetracks on the schedule, TV partners and everything else. […] I’m focused on getting this [last race] in this year and starting next year off with a different kind of bang, and we’ll come across that when the time comes.”

Newman enters this weekend’s season finale at Phoenix Raceway with the opportunity to finish as high as 22nd in the championship standings and as low as 28th.

“My abilities behind the wheel have not changed.”

Ryan, the reality is that everyone’s abilities change with the passage of time. Reflexes slow down. Muscle twitches slow down.

Learning however can offset the above. Experience can lead to better anticipation. But that is a short term deal.

At some point, reality overpowers denial.

One of the few hard-nosed racers left. He never takes a lap off and never whines . A genuine Buddy Baker clone. Unfortunately, he is limited by how much money an investment company wants to spend in today’s sport.

Ryan, you are a great driver. I think your car needs to rub faster. Maybe they need to tweak it a little. I am sure 2021 will be a lot better for ALL of us. Just do your best. You are still my FAVORITE DRIVER of ALL time. I will be cheering you on. Be safe out there and can’t wait till next season. I hope to meet you someday.

When a driver becomes notable mostly for his wrecks and his penchant for holding up faster cars when he has no chance of winning, perhaps it is time for him to move on. What is the point of continuing? It is astonishing to realize he won 8 races in 2003. That alone shows how far he has fallen.

Some drivers just want the check and prestige of being able to say, “I’m a race car driver”. They don’t care if they ride around at the back with no chance of rising. I didn’t think Newman would be one of them but here we are. I might do the same thing in that position but probably not if I had been making the kind of money he’s been making the last 20 years. I think I’d be content to ride off into the sunset with my millions banked and live a good life.

He’s won only 9 races since winning 8 in 2003. How many drivers get to keep their jobs doing that?

This is addressed to Bill B too
Newman does. That’s all that counts to him.
Besides, it’s not a JOB. It’s a dream come true he’s living at the absolute best of his ability and equipment.

This was good information. I think what Ryan said is spot on, if they could work on the cars before the start of the race would be a tremendious help. He hasn’t lost his ability to race, he just needs more speed!

He’s been a bad teammate since the Penske days. He’s a loner who thinks his driving and engineering capabilities far exceed those of his competitors. He was a pain to work with at Penske (ask Roger, Rusty or his car chiefs), and he made an average RCR team, well, very average. No change at RFR either, where his “legendary” engineering abilities were less than legendary. Add in the PIA factor on the track and you’ll see why Ryan Blaney wasn’t giving him a pass either.

You’re never going to find a harder working driver than Ryan Newman! Anyone else beside me noticed that RFR stopped running well after NASCAR changed from carburetors to fuel injector? Remember Jack personally set up every carb before each race. This might just be the chink in the Armor at RFR that is keeping them from being competitive week after week! Yes, my friend Ryan was leading at Daytona before the unfortunate accident but I believe that was mostly due to his tenacity behind the wheel more than the speed of the #6 car!