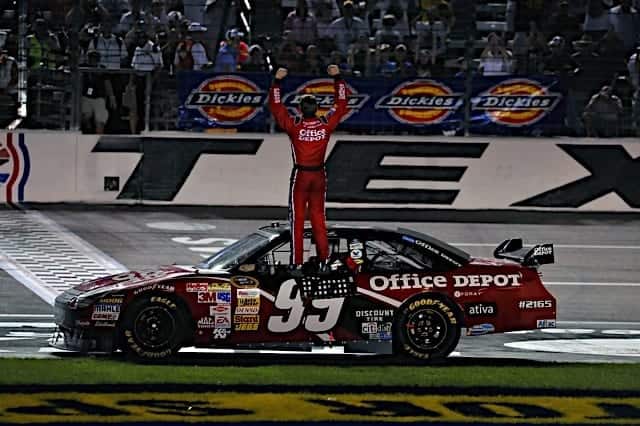 Bill Elliott won plenty of races and money and even earned a couple really cool nicknames in 1985. But the big prize eluded the red-headed Georgia leadfoot that year.

Elliott came into 1985 having won a total of four NASCAR Cup Series races during the previous two seasons, but proved to be almost unstoppable through most of 1985. In the first 20 events, Elliott won an astonishing 10 times, meaning half of the races that were held ended with the No. 9 Ford in victory lane. Seven of them came from the pole position. Becoming “Million Dollar Bill,” courtesy of his Winston Million victory in the Southern 500 at Darlington Raceway, was the pinnacle of his success that year.

Problem was there were still eight races to go. In just four weeks, his 208-point lead became a 30-point deficit, as Elliott finished mid-pack again and again. Darrell Waltrip picked up two crucial late-season wins and capitalized on Elliott’s misfortune. Elliott entered the final race just 20 points down but mechanical problems left him 30th at the end, handing Waltrip his third series crown. Elliott would have to wait three more years to finally earn a title.

Rusty Wallace didn’t have a problem winning in the late 80s and early 90s. It was what he was doing in those races that he didn’t win that made him destined to win just one championship despite being near the top of the list in victories every year. In 1993, Wallace went to victory lane 10 times and was especially formidable on the short tracks. He picked up three consecutive wins in April and stood atop the standings despite a jaw-dropping, end-over-end flip in the season opener at Daytona International Speedway.

Then came Talladega Superspeedway. Just as the field was coming to the finish line, Wallace was turned by rival Dale Earnhardt and slid backwards, setting off another violent, airborne crash. Wallace suffered a broken wrist, which he had to race with, and the incident set off a string of unbelievable misfortune. Wallace failed to finish the next four races in a row and plummeted from the points lead to fifth in the standings. Despite a barrage of late-season wins and finishing with the most victories, poles and top-five finishes, Wallace wound up losing the championship to Earnhardt by 80 points.

Jeff Gordon had quite the coming out party in 1995. Two career wins and an eighth-place points finish in 1994 turned into seven wins and a title in ’95. The team looked for a bigger year in 1996, and in many ways, they got it. Gordon won often, never going more than five races without picking up a trophy. Five races were held during the month of September, with Gordon winning four of them. He had a lead of 111 points over his teammate Terry Labonte with four races to go and appeared to be cruising to a second title.

But a disastrous outing at Charlotte Motor Speedway turned his sizable lead into a single-point advantage. Finishing behind Labonte the next two races handed the lead to his teammate, and despite Gordon’s 10 wins to Labonte’s two, the deficit stood at 37 points when the final checkered flag waved at Atlanta Motor Speedway. Gordon would have to wait one more year to celebrate his second championship.

Mark Martin is considered by some to be the best driver to never win a Cup championship. Martin had an uncanny knack for having his best seasons at the same time that someone else had a better one. He was undone by a penalty that ultimately cost him the 1990 title, giving it to Dale Earnhardt. Then, he finished third in 1997 by a mere 29 points. The near-miss fueled Martin to have his best career season in 1998, but there was just one problem: it coincided with the statistically best year of the modern era for his biggest competitor, Jeff Gordon.

No matter how good Martin was, Gordon was better. Martin started faster, getting to two, three and four wins before Gordon did. But then Gordon went on a rampage starting mid-summer that included four wins in a row and seven wins in a 10-race span. At the beginning of that 10-race run, Martin was 17 points behind Gordon. He won a race and never finished lower than sixth in the same 10 races, yet still lost 50 points to the No. 24 car. A couple late-season incidents left Martin further behind than he was at any point all year, but I still feel like this was the best year any driver had without winning the championship.

Carl Edwards, like Martin before him, was the king of near misses. At least three times, Edwards appeared to be on the cusp of glory only to have it slip away. 2011 and 2016 were painfully close losses, but 2008 had to be the hardest to take. Edwards was a force on nearly every type of track. He racked up nine wins and managed to finish all but two races. Twenty-seven of his 36 starts resulted in a top-10 finish.

Meanwhile, Jimmie Johnson floundered during the early part of the year. Bad luck and poor finishes left him mired in ninth place after the 600-miler at Charlotte Motor Speedway in May. Johnson was third in points when the Chase (playoffs) began, and it only took him until the third of the final 10 races to claim the points lead. While previous years had shown that a driver could only afford to have one bad finish in the Chase, Johnson wound up not having any. His only finishes outside the top 10 were a pair of 15th-place results. So even though Edwards had more wins, top fives and top 10s, Johnson wound up taking home the title simply because he peaked at the right time.

I forgot about Carl Edwards. Shame for us fans that he retired early. Such a good talent and ambassador for the sport.

I fully believe he wouldn’t won a title if he had kept racing.

I believe Edwards retired, in part, because he got fed up with the arbitrary championship format. That last season he was cruising to the championship and then NASCAR called a very, very questionable caution which bunched them back up allowing chaos to transpire. I am sure that there were other factors that went into his decision but my gut feeling is that he felt “what’s the point if it all comes down to a crapshoot in the end”.

Mark Martin: Agree and I too consider him to be THE Best driver to have never won a championship.
The man was a winner. In life and in every facet of racing. ‘Nuff said.

I was at Talladega in 1993 and witnessed Rusty’s violent crash. I can still remember the car flipping in the air right before the start finish line.