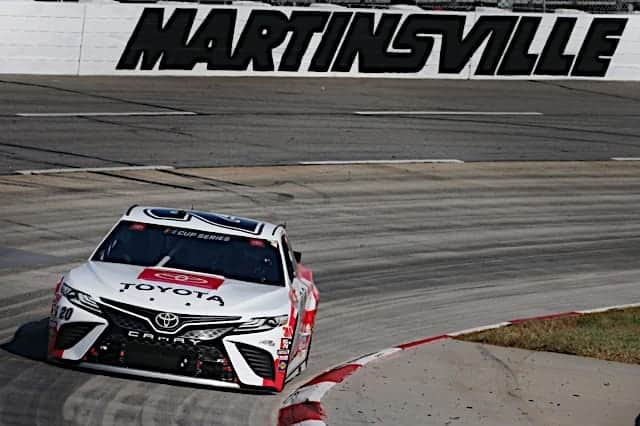 As Chase Elliott was pulling away to victory, the fight for the final two transfer spots was shaping up to be a toss-up between Denny Hamlin, Brad Keselowski and Kevin Harvick. Keselowski had some cushion on the other two and was moving through field, gaining valuable points with every position he gained.

Harvick and Hamlin, meanwhile, were struggling at the end of the event. Harvick was running ninth and Hamlin 11th when Hamlin’s teammate Erik Jones closed in on the No. 11 Toyota. It was clear that Jones had the faster car but he stayed behind Hamlin knowing the position meant so much.

The problem comes with the radio communication that occurred for the No. 20 team during this time. A team member, which is speculated to be Jones’ spotter Rick Carelli, came on the radio and told Jones to not pass Hamlin. NASCAR reviewed the audio and determined that no penalty was warranted.

Still, some think NASCAR should have intervened and penalized the No. 20 team for manipulating the finish. Vito Pugliese and Clayton Caldwell give their thoughts on the situation and debate if NASCAR got it right with giving the No. 20 team no penalty for their radio communication at Martinsville.

As Erik Jones crept on Denny Hamlin in the waning laps Sunday at Martinsville, I had to chuckle to myself. Picturing myself in the same Nomex shoes of my fellow Michigander, how would I react after being summarily dismissed from what once was the flagship ride of the Joe Gibbs Racing stable? Not saying I’d dump the guy, but if I had a faster car, I would probably make an effort to let the team know my displeasure. It looked like Jones made a couple of half-hearted efforts, then fell in behind. Some were upset, suggesting it was rigging the system and bemoaning the horrors of team orders in motorsports. How could this be legitimate? Didn’t we already go through this a few years ago?

After the 2013 Richmond race that saw three teams playing shenanigans in the closing laps to help their respective team cars qualify for the playoffs, NASCAR took action against the teams and then-President of NASCAR Mike Helton issued the following decree:

“Artificially altered shall be defined as actions by any competitor that show or suggest that the competitor did not race at 100 percent of their ability for the purpose of changing finishing positions in the event at NASCAR’s sole discretion.”

Maybe Jones had a good reason not to squeeze by. Those scowling at him have no idea what kind of incentive or contractual obligations he might be held to. How might Toyota react to having one of its drivers preventing one of the two playoff drivers from qualifying for the finale at Phoenix?

First, I think NASCAR is loath to accuse competitors of manipulating finishes, particularly with teams that contribute so much to the NASCAR economy. Sure, there have been a couple of egregious situations in the last 10 years. One was glossed over (benefiting Harvick in 2010), and the other led to the collapse of Michael Waltrip Racing, losing tens of millions of dollars in long-time sponsorship, as well as affecting the careers of three drivers.

Secondly – and perhaps most importantly – this is part of team racing in motorsports. When all the Fords line up at Daytona or Talladega to draft with each other and not pass, is that any different? How many times have you heard a driver say he decided to just push his teammate, rather than make a move for the win (Ross Chastain, not one of them…) at one of those two tracks? Ever watch a Formula One race? Rubens Barrichello made quite a career of falling in behind Michael Schumacher after the first turn, and the rest of the planet seemed pretty okay with it.

As the Macho Man Randy Savage GIF so succinctly states, “You might not like it… but accept it.” – Vito Pugliese

Something Should Have Been Done

I hold the NASCAR Cup Series Championship to the highest regard. We need to maintain the integrity of the championship at all costs – and that’s why I would have handed a penalty to the No. 20 following their radio communication at Martinsville.

I believe this situation is similar to one from the 2019 season when Premium Motorsports and a couple of other teams tried to manipulate the finish at Homestead to make bonus money.

I’ll try and summarize it as simply as I can. Premium Motorsports worked with several different teams in 2019, and towards the end of the year, it was clear that its No. 27 entry was in position to gain a bonus for being the highest “open” team in owner points. At Homestead, a couple of cars that Premium Motorsports worked with were instructed to park their cars so the No. 27 team could gain the positions needed to clinch the bonus. The bonus was worth $500,000.

NASCAR investigated, which included radio transmission of the teams, and it clearly proved that something fishy had happened. NASCAR heavily penalized the teams involved. Several crew members were suspended indefinitely, Premium Motorsports was fined $50,000, and all four cars involved were docked 50 owner points, which saw the No. 27 team lose the $500,000 bonus they had claimed earlier in the week.

I understand the situation last year had more evidence and was a premeditated scheme, but something still should have been done to the No. 20 team for the radio communication that occurred on Sunday. Sure, it’s hard to prove that Erik Jones did not pass Denny Hamlin because he was told not to, but you can prove that the team had radio communication to tell a driver to manipulate the finish. That is something that needs to be taken seriously.

They just set the precedent, and one that devalues the whole NASCAR championship. – Clayton Caldwell

What, a whole article on speculation Jones “might” have broken rules. Yet not a word about Harvicks obvious and admitted to, attempt to manipulate the outcome of the race. What is wrong with you ! What is wrong with Nascar for ignoring it also.

Well Sam wouldn’t have robbed that bank if someone hadn’t of stolen his wallet.
See how idiotic your comment was?

I’m okay with the outcome… there’s nothing to say Jones would have been able to get past Hamlin, and Harvick penalized himself, albeit unintentionally. Let’s move on.

Nothing to say perhaps – but everything to see. That was blatantly obvious. I honestly thought NASCAR would use it as an excuse to use the Jeff Gordon rule – and presto we now have the final 5. That said – I’m fine with it as well. The first day they allowed multi-car teams, team orders were inevitable.

Many times throughout the last year, this and other websites have questioned Jones ability, compared to his teammates, so why is it when he fails to pass one of those teammates, it’s a big scandal?

If I remember correctly, near the end of a race in 2003 at Talledega, Dale Jr had an argument on the radio with his uncle tony Eury Sr. Michael Waltrip was leading and Jr was second, and wanted to race him for the win, but was told by Eury Sr that he had to stay behind Waltrip, and push him to the win.

Even if Erik stayed behind Hamblin on purpose, he’s not the first to do it and won’t be the last. It’s sure not as egregious as Bowyer intentionally spinning to cause a caution, and manipulate the finial results at Richmond in 2013.

The penalty should be for stupidity. The stupidity of not discussing the team orders BEFORE the race at a team meeting instead of on the radio where 1000s of people can hear you.

John
Reply to  Bill B

They talked about it – but couldn’t know if Jones would play ball (and pray it isn’t put to the test). Then he is obviously much faster and coming, Latarte and JR start talking about it on air, and so either the spotter says it on his own without thinking, or he’s directed from on high to “remind” him. If so, a calculated risk they decided to take (correctly as it seems).

It`s a Reverend Joe car involved in this. It`s not like it`s Carl Long.

So true, if it had been Carl Long, NASCAR would have dropped him to last place, penalized him 100 points and fined him half a million dollars!

They just set the precedent, and one that devalues the whole NASCAR championship.

And kids, everyone knew that nothing would happen to the Gibbs team, and it didn’t. You can see in the past cheating to manipulate a race wasn’t tolerated and yet now it is. What a strong message for CRAPCAR to send. Cheat as much as you want if you are a top tier team, we will do nothing. There should have been no penalty to the 20 team, the driver did what he was told to do. The 11 team should be sitting this week. That would send a message, but no, CRAPCAR just proved without a doubt that money talks and BS walks. They have their favorites don’t they. Yea, its all about the honesty of the sport, right? NOT.